Dan Bjarnason’s fast-paced book Triumph at Kapyong is a tribute to not only an oft-neglected war, but also Canada’s contribution to peacekeeping and active countermeasures against Communist incursions.  The release of the book was timed to coincide with the 60th Anniversary of the battle. The date of release was important, but so too was the story.

While the book centers on the Battle of Kapyong, a small series of hills northeast of Seoul, Bjarnason also takes the time to describe the events that led to Canadian involvement in the war, the formation of the combat unit needed to fight this new war, and the courage displayed by key leaders in making sure that this command was part of the wider UN effort, but independent of direct American control. 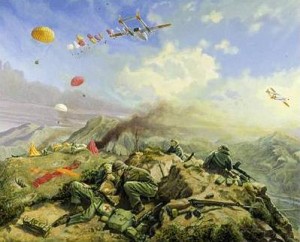 The troops utilized at Kapyong were the 2nd Battalion of the vaunted Princess Patricia’s Canadian Light Infantry, who had earned their reputation at Vimy and Ortona.  Given their past accomplishments, it was not surprising that they were the first to participate in the fighting in Korea.  Bjarnason discusses the importance of leadership on the PPCLI, from the brigade commander, Brigadier John Rockingham, a decorated and respected combat veteran who wished to get the job done professionally, to the various subordinates who made the defense of Kapyong possible.  Of special interest was the role of Lieutenant-Colonel Jim Stone, commander of the 2nd Battalion of the PPCLI, who trained the troops to the extent that they were ready for their first trial by fire in a hostile land against a well armed enemy that preferred to attack at night.  In light of these Chinese tactics and after seeing the massacre of a US patrol that had been caught in their sleeping bags, Stone ordered that the men on patrol would only have a blanket to keep them warm on missions.  It would not keep them as warm, but it would not hinder the soldiers from mounting a counterattack while trying to get out of sleeping bags, or sleep soundly and be caught unaware.

The attack on Kapyong was part of the Chinese “Fifth Phase” offensive that took place in April 1951.  While many historians may not be aware of Canada’s role in this battle, they most likely have heard of the desperate fighting that engulfed the Gloustershire Regiment of the British Army further to the west, or even the 3rd Battalion Royal Australian Regiment that also retreated following the bitter fighting. Where these units were turned back, the Patricias held their ground and prevailed.  Bjarnason compares the defense, and more importantly, the victory, to fabled stands: notably Custer at the Little Big Horn and the Spartans at Thermopylae.  While not as widely known as the British part of the battle, the PPCLI held out against an onslaught of roughly 5000 Chinese “volunteers”, thwarting the attack at a loss of ten of their own. 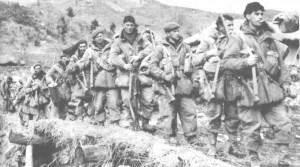 The book offers an engaging and fast-paced read.  Bjarnason notes that the book was not meant for military historians per se but for a wider audience that would appreciate the sacrifices of Canadian soldiers. By providing a brief history of the formation of the unit after the Second World War, Bjarnason allows the reader to appreciate the sacrifices and conditions in which the troops fought and died.  He does an admirable job of adding a personal dimension to the battle by mentioning the men and their history before, during, and after the war.  Some of the personal stories include the actions of Wayne Mitchell, who was awarded the Distinguished Conduct Medal (DCM) for providing fire support with a Bren gun during the attack.  He was wounded twice while saving several members of his platoon by providing covering fire. Similar bravery was demonstrated by Lieutenant Mike Levy, who was in the thick of the fighting at Kapyong, and often called in both artillery fire (from the nearby New Zealand artillery regiment) as well as mortar fire from his own teams, all while yelling insults in Cantonese at his opponents.  While his immediate superior officer, Captain Mills was awarded the Military Cross for this action, he did “little more than pass information between the platoons and the support units” while Levy was in the line of fire. (pp. 135-136). Mr. Bjarnason tries to correct the historical record by noting how valiantly Lieutenant Levy performed, and how proper recognition of his actions was denied based merely on his faith in Judaism.  This sort of anti-Semitism was prominent in the 1950s but by today’s standards it seems petty.  Mr. Bjarnason’s discussion of the Allied effort, from American badgering to get the Patricias into the line (and Lieutenant-Colonel Stone’s refusal to do so until they had acclimated themselves to their new environment), as well as the efforts of New Zealand gunners and the Indian medical unit, illustrate effectively that this was truly a United Nations effort.  It is also interesting to note thatLieutenant-Colonel Stone fought for training, acclimation, and patrols in the sectors before being placed on the line, which greatly helped the Patricias survive the worst phases of the battle.

One weakness of the book is noted Bjarnason himself: it is not a comprehensive military history.  The maps were sufficient to complement the story, but better tactical maps showing locations and movements of both the Chinese attackers and Canadian defenders would have improved the clarity of Bjarnason’s narrative.  The book provides the reader with a sample of other histories of the battle in the bibliography as well as a listing of the official histories of Canada’s role in the Korean War. These works illustrate the “big picture” aspect of the war in toto. Nonetheless it is important to remember that this book was never meant to serve as a definitive history of the war, rather, it draws attention to the first major battle of the Canadian army in Korea, and how that battle was far more critical than one might imagine.

Korean veterans, regardless of their nationality, have reason to feel slighted by the lack of knowledge about “their war.” Few know or appreciate what horrible conditions were encountered on the Korean peninsula: the mountainous terrain similar to the conditions in Italy during the Second World War; the constant patrolling and static nature of the war that meant conditions not terribly different then at Vimy or Passchendaele, and finally, the problems of unequal fighting materiel.  Bjarnason notes that in the face of the human wave attacks by the Chinese, the bolt action Lee-Enfield rifle issued to the Patricias, essentially unchanged since its introduction in the British Army in 1895, was too slow.  However, it was not the weapon, but the man wielding it that ultimately made the difference. This one example brilliantly captures the thrust of this fine book: to recount the contributions of these Canadians on a small hill in Korea, and the need to remember their sacrifices.