To purchase this issue or back issues of Canadian Military History from 2002 onwards, visit the Wilfrid Laurier University Press website at www.wlu.ca/press or click here.

To order back issues published before 2002, contact Caitlin McWilliams at [email protected] 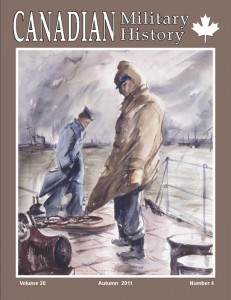 Abstract: Just 13 days after his 100th birthday, Leonard Brooks, a Second World War Canadian war artist passed away. Trained as a commercial artist, Brooks joined the Royal Canadian Navy (RCN) in 1943 and was appointed an official war artist the following year. He painted scenes of the Royal Canadian Navy onCanada’s east coast, shipboard life on minesweepers, frigates and aircraft carriers and various war scenes inEnglandandFrance. A total of 113 pieces of his work, “all my children” in his words, are held by theCanadianWarMuseum.

“A useful accessory to the infantry, but nothing more”: Tanks at the Battle of Flers-Courcelette, September 1916

Abstract: The Battle of Flers-Courcelette is chiefly remembered as the combat introduction of tanks. The prevailing historiography maligns their performance as a lacklustre debut of a weapon which held so much promise for offensive warfare. However, unit war diaries and individual accounts of the battle suggest that the tank assaults of 15 September 1916 were far from total failures. This paper thus re-examines the role of tanks in the battle from the perspective of Canadian, British andNew Zealandinfantry. It finds that, rather than disappointing Allied combatants, the tanks largely lived up to their intended role of infantry support.

Abstract: The crossing of the Canal du Nord stands as one of the most impressive Canadian tactical operations of the First World War. Incorporating a risky battle plan, emphasizing combined arms operations and utilizing the recently re-organized Canadian Engineers, the battle stands as a benchmark for the evolution of 20th century combat. Although sustaining high casualties, the Canadian Corps overcame one of the strongest German defensive positions along the Western Front in an operation that foreshadowed the mobile, combined arms doctrine of the Second World War.

S.L.A. Marshall and the Ratio of Fire: History, Interpretation, and the Canadian Experience

Abstract: The famous “ratio of fire” data proposed by S.L.A. Marshall claims that no more than 15-20 percent of soldiers fired their weapons in combat. This article examines whether or not historians can treatMarshall’s ratio of fire data as veracious, and if so what interpretations one can assign to the phenomenon of combat non-participation. The article contends that based upon the Canadian experience it is premature to universalizeMarshall’s findings beyond his specific historical subjects, and that studies of human behaviour in war need to look beyond the ratio of fire data as a paradigm for understanding the conduct of soldiers in battle.

Abstract: During the early Cold War, the Canadian government advised the public that they could cheaply build fallout shelters in their homes to protect their families from radiation after a nuclear war. Publicly, the government stayed out of the shelter-building business, citing that the cost was too high. However, from 1959 to the mid-1960s, the Canadian Army secretly constructed a network of 2,000 fallout shelters in government buildings: the Nuclear Detonation and Fallout Reporting System. This article explores the origins of this network and the reasons for its decline.

Abstract:  Flight Lieutenant R.F. Delderfield was a RAF public relations officer in 1944 when he was ordered to the continent to cover the capture ofLe Havre.  Arriving about a week after the city was liberated, Delderfield spent two days examining the town and interviewing soldiers and civilians about their impressions of the RAF bombing of the city. The report is noteworthy for the attention it pays to the impact of the bombing of the local population. The RAF subsequently modified its plans for the bombing ofBoulogneso that only defensive works around the perimeter of the city were attacked and a Royal Air Force officer was in direct communication with the aircraft during the attacks to ensure that accuracy was maintained.

The First World War between Memory and History: A Conference Retrospective

Abstract: Long after the guns of the First World War went silent on 11 November 1918, the war continues to spark debate. The many points of contention were on full display at the “From Memory to History” conference, hosted byWesternUniversityinLondon,Ontario, over three days in November 2011. Scholars and enthusiasts from around the world gathered to share, debate and ultimately demonstrate that the war’s many legacies are still open to interpretation, even as the centenary of the war’s outbreak approaches. Perhaps the most crucial lesson learned is that both memory and history are malleable concepts, prone to revision, and there are numerous narratives in many disciplines that remain untold, even with an event as well-documented as the First World War.