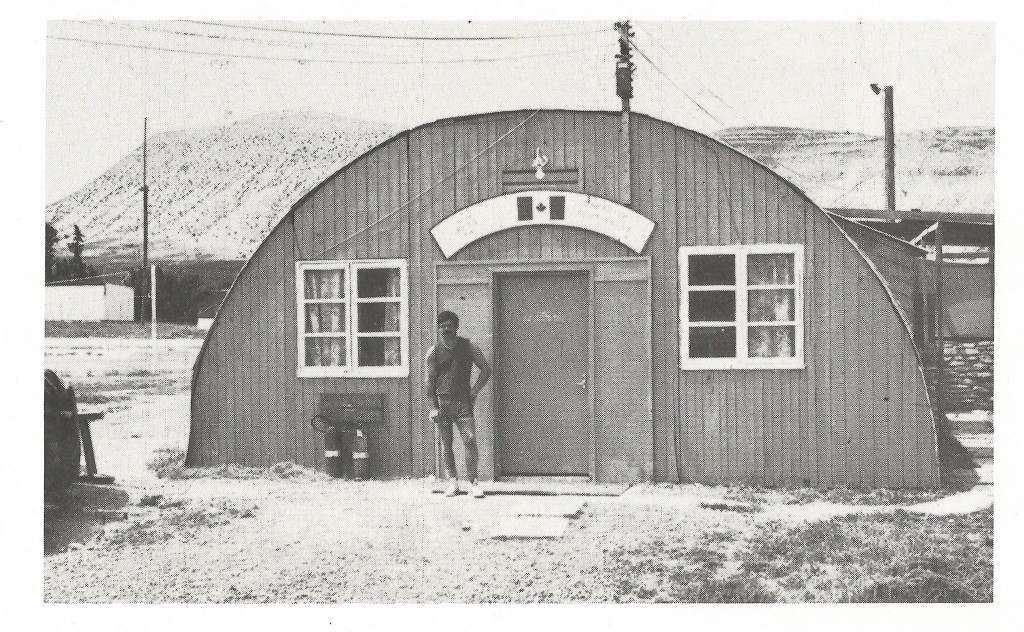 The humble digs in Louroujina (compared to the Ledra Palace) where we slept and played table tennis. Private Rick Edmonds in front of door.Picture Credit RCR photographer.

It was just a matter of time before I would be ripped from the lap of luxury at the Ledra palace and thrown into a more usual environment for a peacekeeper. Our group, B company, was also responsible for the safety of Louroujina. My turn came to be shipped out with a small contingent to keep the peace there. During the civil war, Louroujina was the deepest incursion into Greek territory the Turks had managed to secure. The reason for this incursion was that Louroujina was the second biggest Turkish settlement in Cyprus numbering 1,963 souls. It was completely surrounded by Greek Cypriot villages. There was a concern that a massacre would occur. A group of Canadian soldiers were always present in order to avoid this from happening. Only a few well trained soldiers against who knew how many Greeks was deemed a sufficient deterrent. At least, we all hoped it would be! Besides, there really were not enough of us to go around and cover every hot spot on the island. 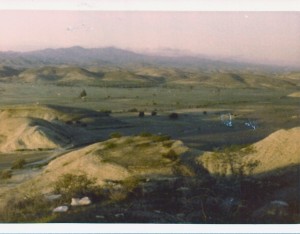 Area at the bottom of mountain with the road running between the Turkish and Greek checkpoints where Canadian soldiers patrolled with loaded weapons. Photo Credit Frank Reid

Tempers were running quite high on both sides with the invasion only six months old. Even though Greek and Turkish Cypriots had been living side by side in relative peace for over 600 years, they were now ready to perpetrate atrocities on each other at the drop of a hat. Overshadowing the village of Louroujina was a small mountain or, I should rather say, an 800-foot high hill. The church which used to sit at the top of this hill had been converted into a home for regular troops from Turkey. A big red Turkish flag flew over it and you could see a number of nasty looking chinchine guns right beside the building. There was no doubt about it; they meant business. These Turkish regulars were far better trained and disciplined than the ragtag bunch of Cypriot troops from either side.

On the left: Church at the top of the mountain that had been turned into a machine gun nest. You can see the gun emplacements on the left and right in front of church. One the right: he Canadian OP half way down the mountain. There was a bullet hole in the centre of the plexiglass of the OP where the peacekeeper would have been sitting. Photo credit Frank Reid

The UN maintained an Observation Post, or OP as we called it, halfway down the hill. It consisted of a small, three-sided box, open at the back, made of quarter inch thick plywood and crowned by a galvanized steel roof. It was a cozy little box: 5 feet wide, 5 feet deep and 7 feet tall. The front panel was facing downhill and had a Plexiglas window with a bullet hole right in the middle. I am glad I was not the poor bugger on duty the day this happened! An oversized blue and white UN flag flew over our little home. This flag was supposed to advertise our presence to make sure we were not shot at. Obviously, it did not work all the time!

The OP was furnished with two seats, made of wooden crates, and a radio. This was where we sat to observe the area with our binoculars when it got too hot to stand outside. The OP was manned by only one soldier during the daytime and two at night. Behind the OP was a crudely built wood frame bunker   5 feet deep and 4 feet wide with a 3 feet tall entrance. The side of the mountain served as the back wall. It was completely covered with sandbags, supposedly to keep us safe should we come under fire for some unforeseen reason. In reality, we took turn using it as sleeping quarters during our overnight duty, even though this was not permitted. We were always chronically sleep deprived and took any opportunity to get a little shuteye, even if it was only for a few minutes.

The first night I was at the OP I heard a loud crashing noise. My buddy and I went outside to see what was happening. The Turkish soldiers posted at the top of the hill felt the urge to welcome us. We could see them waving and yelling. They had thrown rocks on top of our observation post to get our attention. We waved back before returning to the OP. They were well informed and knew we were new here. In their own way, I think they were telling us the watchers were being watched.

The countryside around Louroujina was extremely flat, with the exception of the hill. Our base camp was set up at the foot of the hill near the Turkish village, between the village and the Greek checkpoint. There was also a Turkish checkpoint in the area, manned by Turk Cypriots. From our OP perch, halfway up the hill, we could see everything that was happening. The scenery was rather boring: a sea of yellow rocks dotted here and there by sparse vegetation. There was only one way in and out of the village we were protecting: a small dirt road which was used by all, running to a Turkish military camp in Pyroi. We patrolled the road between the Turkish village and the Greek checkpoint day and night.

At night, we had the luxury of two people patrolling the road. During the day, only one soldier was on duty. According to our own policies, no soldier should be out on patrol by himself with a loaded weapon in the situation we were in, but being short-staffed, we made do with what we had.

On my second week in Louroujina, I was on daytime patrol, dragging my tired khaki-clad ass down the road, making sure no trouble happened. It was really hot that day, around 95° F and no shade. The heat was getting to me. Suddenly, I noticed a pack of dogs on my left, just off the road. There were six of them of various sizes, all rather mangy looking with their ribs showing through their fur. They looked hungry and thirsty and had their tongues hanging out. I had the feeling they were stalking me. They were following my every move; they walked when I walked and they paused when I stopped walking. I do not like dogs at the best of times and I certainly hated these ones when I thought they were considering me as a viable option for their dinner! The presence of a small gully between them and I brought little consolation since it was only ten inches deep. Not much of a deterrent if they decided to attack me. I quickly inserted a round into the chamber of my rifle, just in case I needed to fire in a hurry. This was strictly against regulations. As if I cared! In a situation like this every second counted, so I took the safety off as well. 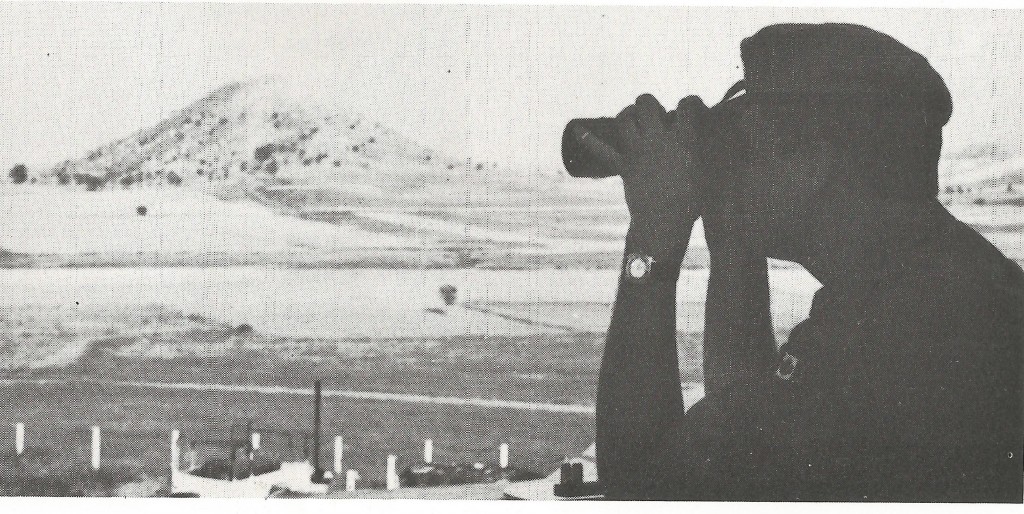 I finally made it to the Greek checkpoint and I relaxed a bit. There were three Greek Cypriot soldiers waiting for me. They were unshaven, untrained, undisciplined and heavily armed with AK47s. Since they were all militia type troops, you could never tell where they got the ammunition for these weapons or even if they had any. I felt like I had left one dangerous situation for another and I was not sure which one was the worst. None of them could speak English and I did not speak Greek. I was calling our base camp to give them my “SitRep”, or situation report, when one of the Greeks touched my radio. I do not know what was on their mind that day. Maybe they were bored or restless or just trying to pull my string and see how far they could push me. Who knows! I was already in a bad mood and they were not helping things along. What this guy had done, in my mind, was just bad manners. It was not like they had never seen a radio before. I quickly slapped his hand away from my radio. Then, one of his buddies perpetrated a cardinal sin; he touched my rifle! That was the last straw. I took two steps backwards and shook my head. I motioned to the one who had touched my rifle to come close. Apprehensively he moved forward. I started to pull back the action of my rifle, just enough for him to see the brass color of the cartridge. Now he knew it was loaded and ready. I pointed to the bullet with my finger and then I tapped him on the forehead and said “this one’s for you”. I could see the fear in his eyes and, at that point, I realized I was tired and bored with all this useless game playing and just didn’t care anymore, so let the chips fall where they may. All three moved away from me. I glared at them and turned around to walk back to camp. I must admit I had the thought that, at any moment, I might get a round in the back.

I never had trouble with that checkpoint ever again. This situation exemplified the reason why soldiers should never be on patrol alone. Unfortunately, this was not a textbook situation. This was real life.