Abstract: This article is the second in a series that explores the disparate number of documented Canadian Victoria Crosses (VC) awarded during the Great War. Military historians and others use varied criteria to determine a Canadian recipient. Some employ inclusive measures while others are minimalist in their requirements. The 1940s saw the genesis of divergent criteria. The study draws on primary sources as well as Canadian and British secondary literature to demonstrate that inconsistent, erroneous criteria culminated in seventy-two VC holders. The author challenges established publications, presenting the case for two categories of VC recipients: “Canadian” and “dual-allegiance”-the latter for non-Canadian Expeditionary Force recipients. Click here to read Part I, “A History of the Victoria Cross”. 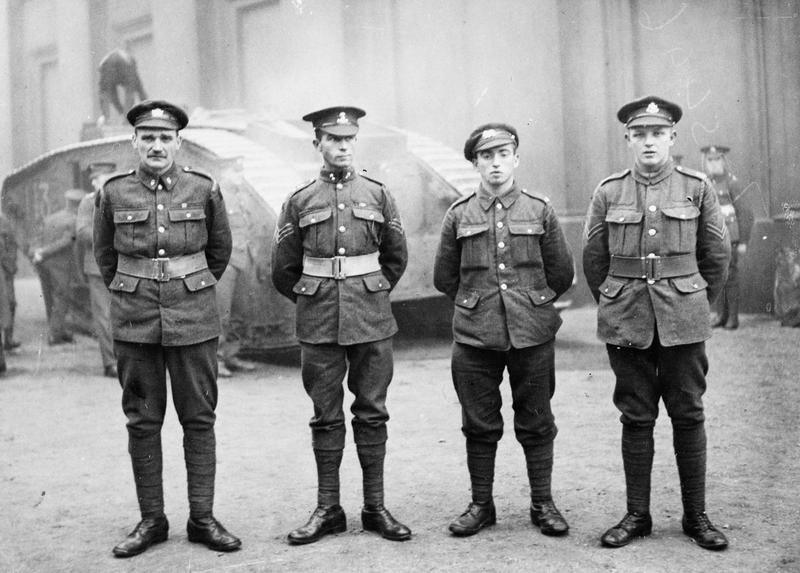 Establishing who qualifies as a Canadian VC recipient is problematic. During the Second World War Edwin Pye, a civilian researcher for the Canadian Army Historical Section, writes “[t]his poser crops up on occasion but never is it possible to give a satisfactory solution.”[1] He classifies VC recipients under three categories:

Seventy Great War Canadian VC recipients listed in the 1956 edition of The Legionary “includes all who, irrespective of country of birth, have won the Victoria Cross while serving with the Armed Forces of Canada, and all Canadian-born members of the British Forces who have been awarded the V.C.”[2]

In Canada’s V.C.’s, Lt.-Col. George Machum uses the Department of National Defence (DND) list of ninety-four Canadian holders of the VC[3] and adds Lance Corporal Michael O’Leary and Lt. Rowland (also spelt Roland) Bourke. [4] According to Arthur Bishop, author of Our Bravest and Our Best, a Canadian VC holder is an individual who[5]

In The Armed Forces of Canada 1867-1967, edited by Lt.-Col. D.J. Goodspeed, Canadian VC holders are “only those who were awarded the Victoria Cross while in the Canadian services, together with those Canadians who served in the Royal Flying Corps and Royal Air Force when there was no Canadian air force.”[6] The Directorate of History and Heritage (DHH) booklet Pro Valore: Canada’s Victoria Cross authored by Ken Reynolds states “[t]he number of Canadians awarded the Victoria Cross varies significantly on how the total is calculated.”[7] The DND criteria for Canadian VC recipients can also be extracted from this booklet.[8] Eighty-one VCs–four in the South African War, sixty-four in the Great War and thirteen in World War II–have been awarded to members of the Canadian military (e.g. the CEF’s Canadian Corps in the Great War and the First Canadian Army in World War II), including those from Newfoundland and Labrador. Another thirteen awards were made to men born in Canada who served in British military units. VC recipients who emigrated from the UK[9] are classified as being associated with Canada.

For the Great War, the DHH criteria for a Canadian VC[10] are a person who is

Veterans Affairs Canada (VAC) criteria[12] for the Great War are

DND publications have consistently maintained sixty-four as the number of Canadian Great War VC recipients. One of the earliest instances is History of the Great War, 1914-18 by Brig.-Gen. E.A. Cruikshank[13] who was working in the Department of Militia and Defence (the precursor to the DND) at the time of the booklet’s publication. Goodspeed’s The Armed Forces of Canada 1867-1967, authorised by the Directorate of History, Canadian Forces Headquarters, lists sixty-four as does DHH’s booklet Pro Valore: Canada’s Victoria Cross.

Reynolds mentioned that one of the three guiding principles employed for the official counting of Canadian VCs in the Great War by DHH was retroactivity –membership in the Royal Newfoundland Regiment.[14] DHH has taken a minimalist approach according to Reynolds, who stated that there is no federal government view pertaining to the eligibility of a Canadian VC recipient. The DHH website declares “Full citations to these awards are recorded in 1000 Brave Canadians …”[15] However this book includes six Great War VC holders not listed by DHH.

Conversely, VAC uses an inclusive agenda for its Canadian VC recipients. The VAC website for Orders and Decorations declares “Full citation to these awards are recorded in Valiant Men …” This 1973 publication lists sixty-nine Great War Canadian VC recipients. John Swettenham, the editor of Valiant Men: Canada’s Victoria Cross and George Cross Winners, explains “Our list of Canadian V.Cs. differs from those already published. In a country such as Canada, where immigrants come and go, this is to be expected.”[16] 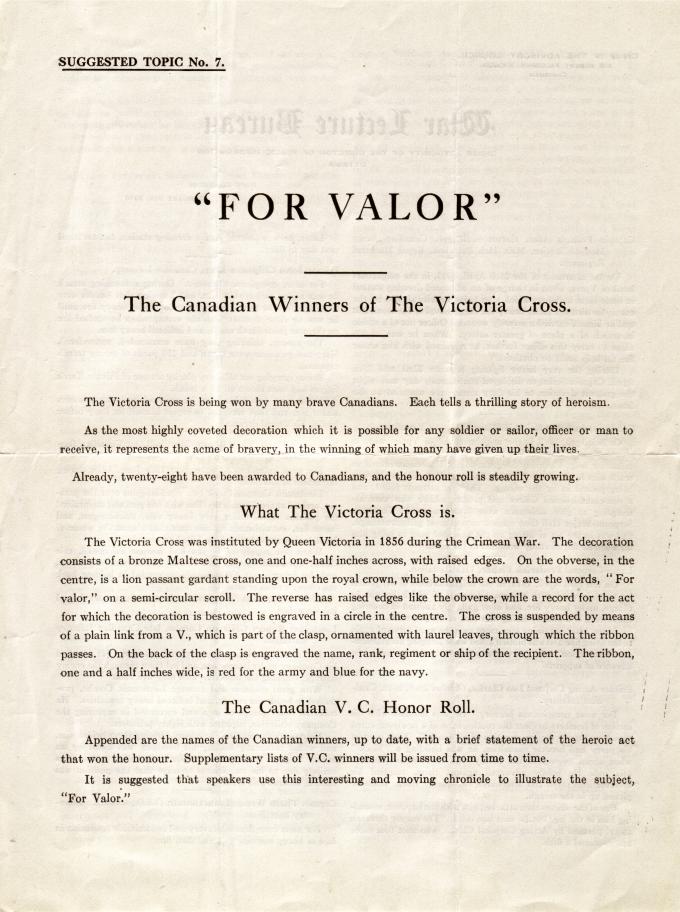 Prior to 31 March 1915, the nationalities of the men serving overseas in the First Contingent, CEF were: Canadian-born 30 per cent, British-born immigrants 64 per cent and all others 6 per cent.[17] In the spring of 1917, “first generation British immigrants were still in the majority in the Canadian Corps.”[18] This is not surprising considering the massive immigration movement in the years leading up to the outbreak of the Great War. By the end of the war 51 per cent of the CEF had been born in Canada.[19] Many viewed the Canadians as British troops in a British army.[20] Prime Minister Sir Robert Borden, “British to the core,” viewed Canada as a proud contributing member of the Empire.[21] On 4 August 1914 Borden announced that Canada’s status was that of a joint-belligerent in the war. Canada’s automatic involvement was to be understood as “a national, not just Imperial, obligation.”[22]

Militia Order No. 372 issued on 17 August 1914 concerning mobilization for overseas service states “[t]he Canadian Expeditionary Force will be Imperial and have the status of British regular troops.”[23] The imperialist and nationalist[24] Sir Sam Hughes, Minister of Militia and Defence, believed “the colonies should assist the Mother Country in time of war, …”[25] The Canadians would serve as part of the British Expeditionary Force (BEF) “commanded by a British general, but they would keep their own identity.”[26]

“Not until September 1916 was it realized that the C.E.F. was not, in fact, “Imperial” – i.e. raised by His Majesty beyond the limits of the United Kingdom and of India to form part, for the time being, of the regular forces; … It was, … paid for and maintained with monies voted by the Parliament of Canada.”[27] During the war, Canadians used the term “Imperial” for troops from the British Isles. To the British army it meant troops from overseas dominions and colonies[28] such as the designation “Australian Imperial Force” used by the Australians.

Uneven coverage by the British press concerning significant Canadian achievements occurred during the war. Currie complained “[t]he censor has not always played fair with Canada. Many victories escribed [sic] in the reports to British troops were victories won by the Canadians.”[29] British war correspondent Philip Gibbs states “the British had captured the heights of Vimy …”[30] Other British publications proclaimed the deeds of the “gallant colonials.” British-born CEF veteran Arthur Lower writes “In the trenches of France and Flanders, the spirit of Canadian nationalism was born.”[31] This emergent pride in nationality diminished the “stigma of colonialism.”[32] The allure of nineteenth century imperialism was spurned by the Great War and in fact “the First World War killed it.”[33]

Despite the oversights of the British press and censors, early postwar Canadian publications were not motivated by self-pride to count anyone with a Canadian association as a Canadian VC holder. Neither did the imperialist view that all were British troops result in a push to inflate the Canadian VC count.

(d) … Canadian domicile is acquired for the purposes of this Act by a person having his domicile for at least three years in Canada after having been landed therein within the meaning of this Act: …

(e) “alien” means a person who is not a British subject;

iii. a person naturalized under the laws of Canada who has not subsequently become an alien or lost Canadian domicile: …

According to DHH criteria, those who wore a Canadian uniform regardless of country of origin, domicile or immigration are Canadian VC recipients. Canadians, whether by birth, domicile or naturalisation, who were awarded VCs while serving in British military units are classified as being associated with Canada.[37] In this article, the first criterion for a “Canadian” VC is a Canadian uniform worn at the time of the deed.

Should a Canadian-born serviceman awarded the VC in a British military unit be deemed a Canadian VC recipient as claimed by Bishop, Pye and The Legionary? If this is acceptable, it follows that a British-born serviceman awarded the VC in the CEF should be considered a British VC recipient. Accordingly, the twenty-nine UK-born CEF VC recipients would be British VC recipients instead of Canadian. On the contrary, a Canadian-born VC holder who served in a British battalion is declared a British VC holder and a British-born VC holder who served in the CEF is declared a Canadian VC holder.[38] Other countries have similar standards. For example, VCs were awarded to five New Zealand-born recipients who served in other forces (e.g. the AIF) during the Great War and are not credited to New Zealand in official records and statistics.[39] One definition of an Australian VC recipient is “a person who was in the Australian defence force, as an Australian serviceman, at the time of the action for which he was awarded the Cross, regardless of his country of origin or citizenship.”[40] Those who transferred to another country’s armed forces were no longer considered Australian servicemen. As Theodore Roberts claims, “Whatever a man used to be, he is now what his cap badge proclaims him.”[41]

The term “dual-allegiance” VC is employed in this article for Canadian-born, Canadian-domiciled or naturalised Canadians who earned their VCs while serving with non-Canadian military units. Dual-allegiance VC recipients’ loyalty was to their country of birth or citizenship (Canada) as well as to the country of their uniform (e.g. Britain). Three non-CEF VC recipients were Canadian-born and five immigrated to Canada before the Great War. They are listed in “Table 2”. Although British subjects, some of the five immigrants were not domiciled. Canadian-born air VC holders Major William Barker, Captain Billy Bishop and 2nd Lt. Alan McLeod are excluded here.

1. Non-CEF VC recipient Newfoundland-born Private Thomas Ricketts, who served in the Royal Newfoundland Regiment (part of the BEF), is included in the DHH and VAC lists.[42] Ricketts is neither a Canadian nor a dual-allegiance VC holder because his regimental cap badge was of a caribou head over the name Newfoundland. His metal shoulder title was NFLD. His is a Newfoundland VC.

2. Thirty Canadian V.Cs. lists recipients from 23 April 1915 to 30 March 1918. The eight non-CEF VC recipients are not listed. CEF VC holders Edward Bellew and James Richardson are not included even though both earned the VC before March 1918. W.B. Kerr, author of Canada’s Participation in the Great War declares that Thirty Canadian V.Cs. “… ought to be corrected, enlarged and republished.”[43]

[4] Machum claims both men were residents of Canada when war was declared. DHH claims the number of original VCs awarded to members of Canadian military forces is eighty-one.

[18] Paul Dickson, “The End of the Beginning: The Canadian Corps in 1917,” in Geoffery Hayes, Andrew Iarocci and Mike Bechthold (eds.), Vimy Ridge: A Canadian Reassessment (Waterloo, ON: Laurier University for Military Strategic and Disarmament Studies and Wilfred Laurier University Press, 2007), 33.

[30] Philip Gibbs, Now It Can Be Told (New York and London: Harper & Brothers Publishers, 1920), 458. His war dispatches published in 1964 gave equal credit to the capture of Vimy Ridge to the Canadians and the 51st Imperial Division. Nevertheless, five famous British war correspondents did pay tribute to the Canadians during the war. See Canada in Khaki No. 2 (London: Canadian War Records Office, 1917), 9-18.

[36] “An Act respecting Immigration,” http://www.pier21.ca/research/immigration-history/immigration-act-1910, accessed on 28 March 2015. The Naturalization Act, 1914 required an immigrant to live in Canada for five years.

[38] Iain Stewart, “The Victoria Cross,” http://www.victoriacross.org.uk/jjheader.htm, accessed on 28 March 2015. Canadian-born Philip Bent and Robert Cruickshank served in British military units and are classified as British VC holders. (Countries of VC holders are colour coded in the VC tables. Canadian VCs are marked blue and British VCs are marked black. See for example http://www.victoriacross.org.uk/jjwwi17.htm for Bent and Pearkes.) British-born Sergeant Hugh Cairns and Major George Pearkes who served in the CEF are classified as Canadian VC recipients.

[42] The Canadian Corps fought under the “operational umbrella” of the BEF. See Cook, At the Sharp End, 4.