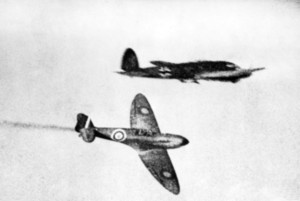 When thinking about modern air combat, most Canadians can be excused for thinking in terms of the gallant days of yore, when pilots tested their bravery and flying expertise in a chivalrous game of skill. The Battle of Britain forms the model of most people’s idea of air combat. In this, few consider the importance of technology in shaping the outcome; the fighter ace wins through a combination of daring and skill. Of course, the reality is that superior technology has always dominated the results. Moore’s Law, the concept governing the speed with which micro-chips increase in power, plays an increasing role in determining this outcome. Moore’s Law notes that the power of microchips, as represented by the density of transistors, doubles every 2 years. This power enables chips to process greater and greater amounts of data at faster and faster speeds. Air combat is largely governed by who can see whom first; sensor information is critical in winning this contest. The ability to both see and remain hidden in this electronic environment will dominate the evolutionary process guiding fighter development.

Much has been discussed about the F-35’s capabilities under the term “fifth generation”. In the media, the F-35 is often described as “stealthy” linking that attribute and the fifth generation concept indelibly together. Most commenters have questioned whether Canada needs a “stealth jet”. Aircraft like the F-117 Nighthawk and B-2 Spirit have been typically used by the USAF in the opening moments of several air campaigns over the past three decades to “kick the door in”. Stealth is a valuable capability when conducting air operations against an opponent whose air defence systems remain intact or only slightly degraded. For many Canadian observers, such activities could be safely left to the major players, such as the USAF, to conduct. Further, stealth seems of limited utility to the protection of Canadian domestic airspace and strikes some as a frivolous option that imposes an unnecessary price point in the procurement of our next fighter. While stealth is an important characteristic in fifth generation fighters, it is just one in terms of how that generation is defined. It is more accurate to say that fifth generation fighters are those that have been decisively shaped in every way by the implications of Moore’s Law. 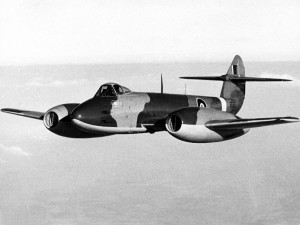 Fighters have gone through a rapid pace of evolution since they first appeared over the skies of the Western Front early in the First World War. Even in that war, the tactical advantages provided by more powerful engines, better armament, and sturdier, better designed airframes generated powerful Darwinian evolutionary effects. Second World War aircraft like the ME-262, the Gloster Meteor and the DeHavilland Vampire formed the first generation of jet fighters. Propeller powered fighters rapidly disappeared from the force structures of modern air forces and remained only as highly specialized aircraft, such as the Douglas A-1 Skyraider used in air to ground close air support missions. The iconic F-86 Sabre and MiG-17 of Korean War fame ultimately typified this generation. However, what characterized all these airframes was simply the substitution of jet turbine engines for propellers. In all other ways, jet fighters shared the same characteristics with the early fighters of the First World War: a platform on which a gun was mounted to shoot other aircraft from the sky.

Second generation fighters began appearing in the early 1950s and had a very different type of design philosophy. These fighters were fundamentally shaped by the technological revolutions of nuclear weapons and air-to-air missile systems. Prevailing ideas of how future war would play out assumed the massive use of nuclear weapons. Fighters were designed either as missile-armed interceptors to shoot down the fleets of bombers, or fighter-bombers designed to drop small tactical nuclear weapons. Speed, rather than manoeuvrability, was the priority. The so-called “Century Series” of fighters, so named for the succession of type numbers (F-100, F-101, F-102 and so on), ably demonstrate this design philosophy. However, such jets were of limited use in the contingencies the United States found itself confronting in the 1960s. The fast, sleek Century Series was of very limited use in Vietnam (only the F-105 Thunderchief saw much operational use there and it was widely decried as a sub-standard airframe nicknamed “Thud” for its proclivity to be shot down).

A third generation of fighters began to appear in the late 1950s with designs like the F-4 Phantom, Mirage III, MiG-21. All took advantage of the increasing power of electronically-guided weapons and advanced air control surfaces to improve manoeuvrability. But in many ways, the third generation was a transitional phase for aircraft design, stuck between the simpler designs of first generation fighters and the computer influenced designs which began to appear in the 1970s. Fourth generation fighters, like the famous “Teen series” of American designs, and the Soviet Su-27/MiG-29 aircraft all incorporated airframes engineered using new mathematical design principles and employing the latest in electronic avionics to improve situational awareness. A renewed emphasis on dog-fighting characterized all these designs, however, most were capable of performing multi-role missions with the flip of a switch. 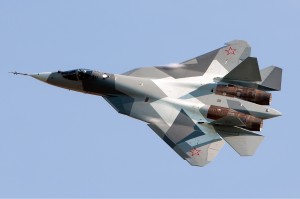 Fifth generation fighters are the first to fully benefit from computer assisted design techniques, novel materials, themselves the product of computer enhanced engineering, and a variety of guided weapon systems. Stealth, or more accurately, “signature management” forms a critical intersection of these three features. The increasing accuracy and reliability of guided weapons demands that airframes become less “visible” to the electronic systems searching the airspace for them. Shaping airframes and novel materials to reduce their radar cross sections will assist aircraft in avoiding detection. In recent air operations, threats have largely come from the ground rather than the sky as air forces have declined to offer combat. Surface-to-air missiles and their sensor systems are themselves taking advantage of the processing power that Moore’s Law is giving them. Systems like Russia’s S-300 employ phased array radars that permit the tracking of multiple targets and the control of multiple missiles at the same time. Man-portable weapons like the SA-24 have become far more deadly. These systems are equipped with seekers that can provide better discrimination between countermeasures like flares and their assigned targets. They are also able to target aircraft from any position rather than just from the rear.

But computers have also influenced fifth generation designs in other ways as well. In fourth generation aircraft, for example, none of the various sensor systems like radar, electronic warfare systems and electro-optical devices are integrated. The cockpit of these fighters has become increasingly complex with the number of systems the pilot must manage in order to retain a proper level of situational awareness. In fifth generation aircraft, however, these sensor technologies will become fused together in a seamless network reducing the cockpit workload on the pilot so he or she can concentrate on accomplishing the mission. An amazing example of this capability is the Distributed Aperture System where a series of infra-red sensors placed around the airframe permit a full 360° view of the airspace projected onto the visor the pilot’s helmet, enabling rapid missile/aircraft detection. The AN/ASQ-239 radar warning system is sensitive enough to permit passive targeting of other aircraft using their own radar emissions. The onboard Active Electronically Scanned Array radar not only searches the airspace, but can be used to transfer data between aircraft, thus allowing a flying local area network to be established for better situational awareness. Aircraft can combine the data they are sensing in order to generate a more precise information and targeting data. 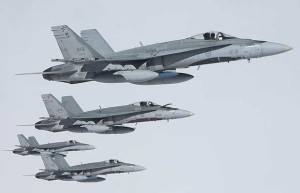 Foreign Affairs minister John Baird recently admitted that any international intervention in Syria, whether supported by a UN resolution or not, would garner only diplomatic support from Canada. Lacking cruise missiles in its force inventory, the Canadian military would not have the technical capability to participate in a short strike operation. Canada has been in similar situations in the past. During NATO operations in Kosovo in 1999, Canadian CF-18s lacked both secure radios and modernized radars, potentially compromising the security of air raids every time our jets flew. Even now, Canada’s modernized CF-18s still do not have the capabilities which enable them to operate in the high threat environments such as over Syria. Our capability decisions, therefore, will have a long-term impact on the terms and level of flexibility a Canadian government can approach an international crisis or conflict with.

The future is difficult to predict, as I have argued elsewhere on this blog. There are two things we can be certain of, however First, while the pace of computer development has slowed of late, it shows no signs of stopping. Some have raised concerns that the physical limitations of chip design are rapidly being approached. However, new innovative technologies such as quantum computing, photonics, and micro-fluidics suggest that Moore’s Law may have considerable life in it yet. In their ability to rapidly crunch large amounts of information, survival in future air combat is no longer just about having speed, manoeuvrability and an accurate weapon. It will also be about sorting out needles from haystacks through vacuuming up vast amounts of sensor data and manipulating it to find the faint signals of approaching threats. In this, despite the huge sums necessary to acquire the jet, the F-35 clearly represents the future directions of air combat, whereas other systems will be stressed to compete with the pace set by Moore’s Law. The second certainty is that Canadian governments will continue to see utility in employing force to shape the international environment in ways that reflect both our interests and values. In that, we can expect that Libya is not the last time the Canadian state will have to call on the combat capabilities of the RCAF. In order to contribute to these future operations, Canadians will have to agree to pay the entry costs of modern air warfare.