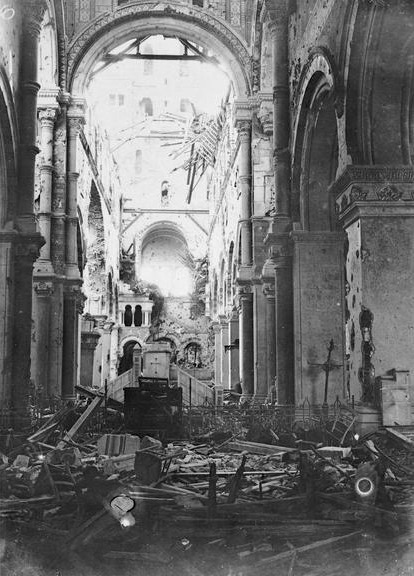 In response to a 1917 exhibition of Canadian military war photographs, the Ottawa Journal stated, “there is a relentless verity about them that eats up the thousands of miles between Canada and the firing line, and brings a man to see the brunt that the fellows…are bearing.”[1] 62 years later, in 1979, photographic historian Jorge Lewinski wrote that First World War photographs were just an aspect of the “delusion which started with the conspiracy of propaganda and continued with the deceit of censorship.”[2]

As Jonathan Vance has argued, attitudes towards the Great War and its commemoration have shifted multiple times between 1918 and the present day.[3] On the eve of the centenary of the First World War, how do we view these photographs? Are they relentlessly truthful documents of life and death on the Western front? Or are they snapshots of the imagined Canadian past, manufactured to delude the public and wage a destructive war of attrition? Perhaps they fall somewhere in between.

When the war began in 1914, Canadian journalists, photographers and artists were banned from the Western Front under the provisions of the War Measures Act.[4] Military leadership was unsure whether truthful news reports of the conditions would be well received on the home front. They were also unsure whether reports could be adequately censored, and were concerned that journalists would reveal details sensitive to military maneuvers. By March 1915, Max Aitken, a millionaire press baron with connections to Robert Borden and Sam Hughes, was allowed to make reports from the front as Canada’s “Eyewitness to War.” Aitken, later Lord Beaverbrook, was particularly concerned with forging an historical document of Canada’s experience at war through textual records, photographs, paintings and films.[5]

Photography was particularly problematic for political and military leaders in 1914. Like journalists, it was believed that photographers could give away important military information and that their work was more difficult to censor. As such, photographers were banned from the Western Front until 1916 by threat of execution.

In January 1916, Aitken formally established the Canadian War Records Office. In this same year, Canadian photographers were finally allowed to make photographs at the front. However, images were first sent to General Douglas Haig to be censored, and were then distributed by the Central Agency in London before being distributed to any other parties. The first Canadian photographs of the war were not intended for the news. Instead, these photographs were to act as a documentary record of Canada’s military efforts overseas. Over time, however, Aitken realized that these photographs could help to boost morale, and images were eventually published in books and put on exhibition. Of course, only positive shots were published.[6] 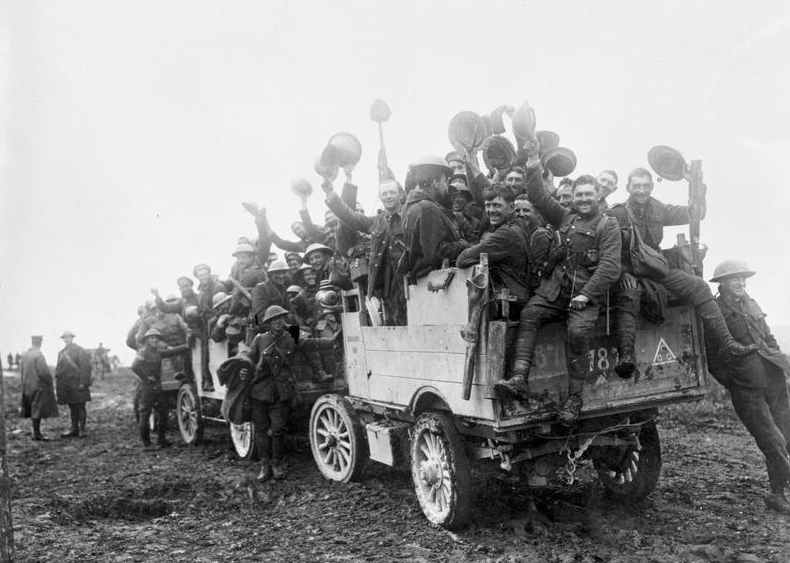 Canadian troops returning from the line after the battle of Courcelette on the Somme. The men are piled on the back of a lorry waving and cheering. Photo by William Ivor-Castle. (Imperial War Museum CO829)

By the end of the War, Canada had employed three official photographers: Captain Harry Knobel, Captain Ivor Castle, and Lieutenant William Rider-Rider. All were established British press photographers who were integrated into the military ranks, producing  thousands of shots for the CWRO. Rider-Rider is perhaps the most famous of the three. He shot between 2800-4000 4×5 glass plate negatives between June 1917 and November 1918.  Like combat photographers of the 19th century, Rider-Rider contact printed his shots on site in a portable darkroom.[7]

Although faster cameras like the ‘Brownie’ had existed for nearly two decades, official war photographers often chose to use dry glass plates. The Brownie was fast enough to allow for “snapshot” photography, but this was at the expensive of image quality. Glass plates were more artistic. Rider-Rider also used a Kodak panoramic camera but was criticized because others believed it was not fast enough. 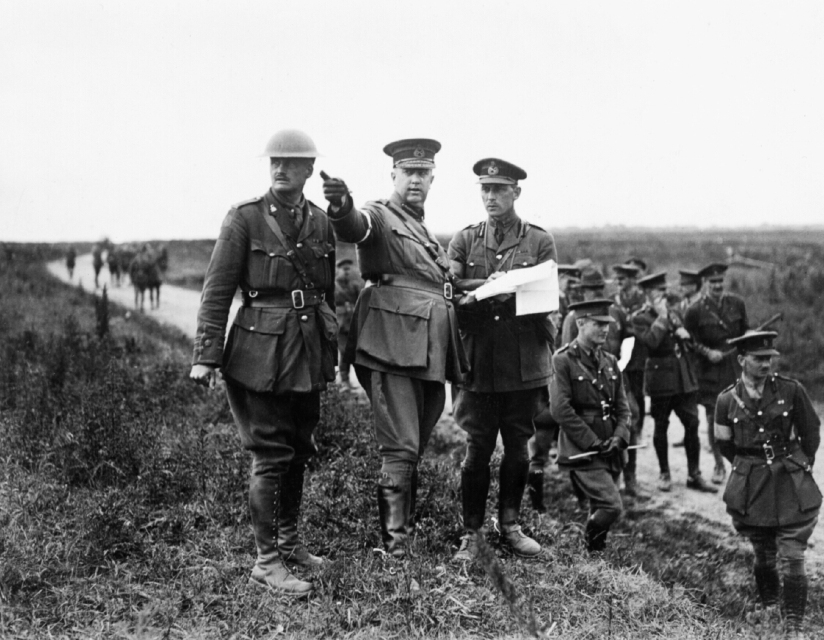 Aesthetically, Canada’s photographs of the First World War conform greatly to the documentary style that was particularly popular during the first decades of the 20th century. Documentary photography, first used to make social commentary of the conditions of the working class, immigrants, and First Nations, was also adopted to show the daily lives of Canadian soldiers. Documentary photographs are distinguished from photojournalism in that the subject is always placed in the centre; no vital pieces of visual information are left on the periphery. These are not photographs that are captured; they are premeditated. Photojournalism, however, is defined as capturing, what Cartier-Bresson coined, “the decisive moment.” Photojournalists work with subjects in flux, and simply get any shot they can. This was neither an aesthetic choice, nor a technical possibility until the advent of the Leica in 1925.  For Aitken, these photographs were simply historical documents that could also serve as propaganda. The photographs were not entirely truthful, but they were also not likely made with the sole intention of duping viewers. We know now that photographs of battles like Passchendaele were not published until after the war, and that defeats were often ignored or spun to boost morale at home.[8] From the perspective of one hundred years later, we also know that the Great War was a colossal human tragedy, in which censoring photographs was only one dubious action of many. Whether or not photographs can give us an accurate representation of Canadian life in the trenches, what these images elucidate is the fact that during total war, political and military leaders made certain decisions in order to bolster their chances of victory and social harmony. As such, these photographs must simply be viewed as a product of their time. 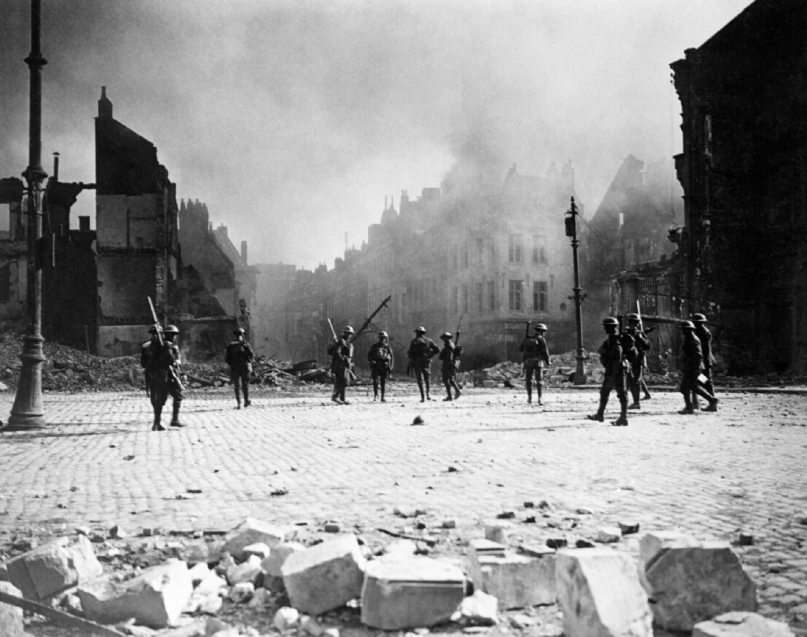 A group of Canadian soldiers strung out in the streets of Cambrai against its still burning buildings. Photo by William Rider-Rider (Imperial War Museum, CO3373)