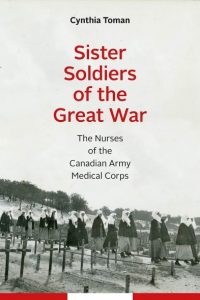 Nursing Sisters were an integral part of the Canadian Expeditionary Force (CEF) during the First World War. They were responsible both for saving lives and ensuring that the CEF was well-stocked with healthy, able-bodied soldiers. Though the demands of military nursing often forced the Nursing Sisters to treat their patients callously, they nonetheless managed to give “the great machine of healing its life and its humanity” (p. 5). During the war, these women were applauded, by politicians and the public alike, as representing the best of womanhood Canada had to offer; yet the Canadian public was quick to forget about them when the conflict was over. Consequently, their lives and war experiences faded into obscurity. Cynthia Toman’s Sister Soldiers of the Great War brings to light the varied experiences of the Great War Nursing Sisters. Toman argues that, while there was no universal experience of war, the Nursing Sisters of the Canadian Army Medical Corps (CAMC) were united in their desire “to soldier on” regardless of the hardships they faced while serving overseas.

Toman is far from the first historian to examine the lives of the Great War Nursing Sisters. Since G.W.L. Nicholson published Canadian Nursing Sisters in 1975, nursing during the Great War has become an increasingly popular topic of study for historians in the field of war and society. Memoirs, biographies, and histories that cover both the volunteer nurses of the Voluntary Aid Detachment and the enlisted nurses of the Commonwealth litter the shelves of bookstores.[1] In fact, in some ways, Sister Soldiers of the Great War is a rather late addition to the existing historiography, as it has been over four decades since Nicholson illustrated the significance of CAMC Nursing Corps throughout Canada’s military past. Yet Toman’s engaging reassessment of the supposed truths about the CAMC Nursing Sisters makes Sister Soldiers of the Great War one of the finest works on the history of Great War nursing to date.

Sister Soldiers of the Great War follows the Nursing Sisters from enlistment to the end of the war, outlining the view of war, not from the battlefield, but the medical tent. Toman begins by detailing who the nurses were as individuals and then explores the ways in which the Nursing Sisters “soldiered on” under adverse conditions, both during and outside of their work on the front. She finishes by briefly exploring the lives to which the Nursing Sisters returned after the war. Sisters Soldiers of the Great War focuses explicitly on Nursing Sisters as individuals, consequently confronting one of the pervasive myths surrounding the Nursing Sisters: that they were a homogenous group of women. In the aptly named second chapter, “Cast of Characters,” Toman breaks down who made up the CAMC Nursing Corps, neatly challenging the claims of homogeneity. The Nursing Sisters were not all single, young, and trained nurses, as most historians have argued, although most were indeed white (a prejudice imposed by nursing schools rather than the CEF). Instead, Toman finds that the Nursing Sisters comprised women from diverse backgrounds. The Nursing Sisters who did not fit the CAMC requirements of age, education, and marital status bypassed regulations by deliberately abstaining from marking down pertinent information on their attestation forms. It is only through pairing Toman’s statistics with the personal accounts of Nursing Sisters in the form of letters, memoirs and photographs that these inconsistencies become clear and a more accurate picture of the composition of the Nursing Sisters becomes possible.

Although relying heavily on the personal accounts of Nursing Sisters, Sister Soldiers of the Great War is also an empirical study that provides some much needed answers to long-standing statistical questions. Most official statistics originate from the personal papers of Matron-in-Chief of the Nursing Sisters, Margaret MacDonald, or from the official historian of the CAMC, Sir Andrew Macphail. However, neither source is completely reliable as both, for no clear reasons, were inclined to alter the total number of Nursing Sisters over time (p. 39). In a project that spanned several years, Toman tackled these inconsistencies by collating the information provided by the attestation papers of Nursing Sisters. She argues that duplicate attestation papers, attestation papers of nurses who enlisted and then withdrew their application, and the incorporation of nurses from other organisations like the Queen Alexandra’s Imperial Military Nursing Service into the total has exaggerated the numbers (p. 39). Most historians use 3,141 as the total number of Nursing Sisters, which comes from MacDonald’s 1922 estimate as to how many Nursing Sisters had served. Toman’s study, however, finds that this number is in fact significantly too high. Instead, she argues that, accounting for duplicates and errors, the number of individual Nursing Sisters was 2,845. Toman’s detailed analysis of attestation papers not only strengthens her argument but also illustrates the importance of approaching these papers with caution.

There is seemingly very little wrong with Sister Soldiers of the Great War. Toman successfully outlines the varied experiences of CAMC Nursing Sisters, from those posted to the Western Front to the few who served as far away as St. Petersburg. Although they held officer rank, Nursing Sisters did not experience the war in the same way as their male counterparts. Unlike male soldiers, Nursing Sisters had a fair amount of freedom in their service, which allowed them “a great deal of mobility in postings and permission to leave for illness, family obligations, or marriage” (p. 17). The Nursing Sisters may have entered a domain previously reserved for men but their gender was never fully forgotten, either by the Nursing Sisters or the men they came into contact with. She then—rightfully—refuses to make any claims, as other historians have done, that explicitly connects the Nursing Sisters to women’s suffrage simply because they were the first women to be enlisted in the army. Ultimately, though “many of [the Nursing Sisters’] accounts express their pride in breaking ground as the only women in the military,” gender norms were very much maintained within the professional hierarchy, and the end of the war brought a return to prewar ideals for women (p. 210).

There is but one small quibble I have with the book. Toman makes a detailed exploration of the social lives of nurses overseas during the war, particularly their romantic involvements which, in some cases, were with married men. However, she only briefly explores how prewar morality factored into the Nursing Sisters’ unchaperoned interactions with their male partners. While it is possible that the sources themselves did not touch on how women felt about these transgressive relationships, given Toman’s argument that most Nursing Sisters were comfortable maintaining patriarchal gender norms, I cannot help but wonder if these relationships were far more transgressive than Toman made them out to be.

Aside from this minor oversight, Sister Soldiers of the Great War is an excellent work of scholarship. Under Toman’s critical eye, the Nursing Sisters are revealed to be a fascinating, complex, and diverse group of women who formed close bonds with each other through a shared experience, if not always a similarity of background. Sister Soldiers of the Great War relies heavily on personal accounts of the war, both humorous and gruesome, which makes for a read as amusing as it is compelling. Anyone who is interested in the topic of military nursing should start here.