The Promise of Digital Tools for Military History by Abby Mullen

View of Gettysburg Battlefield, 1873. Photograph by Mathew Brady. From the National Archives and Records Administration, found through the Digital Public Library of America.

In my mind (others may disagree), digital history is primarily a set of tools and methodologies, not a field of its own. Just as postmodernism or Marxism is a lens through which we can view military history, so digital history is a methodology or approach that can inform and enhance the study of the military in unique ways. One of the most remarkable examples of how digital methodology can change perspectives is Anne Kelly Knowles’s use of GIS to re-evaluate the battle of Gettysburg. Knowles’s argument about Robert E. Lee’s decisions was not visible through a traditional scholarly lens, but it was visible through the lens of digital history.

Military history is uniquely situated to benefit from digital methods. One key benefit of digital technology, according to Dan Cohen and Roy Rosenzweig, is its ability to make data manipulable. Digital tools give us access to corpora of data that would never be usable in a traditional study. Put simply, digital tools allow historians to plow through that data more quickly using a computer than ever would be possible with pen and paper. Instead of having to make generalized claims based on anecdotal evidence, we can use the power of computing to help us find evidence of trends, changes, and paradigm shifts using much larger data sets. Military history is uniquely suited to these types of techniques because the military is all about record-keeping–the big data sets are available. Granted, many of these data sets are not yet digitized, and may never be. But many are.

Another aspect of manipulability that digital history can bring to military history is actual movement. Print maps, no matter how many there are, are terribly deficient at depicting the course of a battle. Digital technology allows us to mobilize those maps and gain an understanding of locations and movements in a different, more comprehensive way. Even a mere time-lapse animation can be immensely beneficial in depicting relative positions and the timing of a battle or a war. Though these animations are often used successfully in public history installations, they’re less frequently used in academic circles. Digital history can allow public history and academic history to join forces in this way, as Ben Schmidt observes along with this animated map of ship movements in the Pacific Theatre during World War II.

Databases and digitization projects are not necessarily showcase projects for digital history, but they are two of the most promising points of collaboration between military history and digital history. Digitizing data such as ship logs or veterans’ records, and then putting those digitized records into databases, can be incredibly valuable for military history work. How many of us have despaired of ever finding all the archives that hold military records pertinent to our projects? I know I have. Digitization and database construction allow military historians to help each other, by storing important data in an online, accessible location, and even allowing many different historians to contribute to the databases, thereby enriching everyone’s research. Even databases without explicit ties to the military, such as Old Weather, can help tell us about the conditions in which naval vessels sailed, and perhaps help us see in military actions new patterns  that relate to the weather. 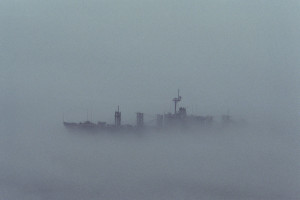 This blog series will explore in more detail some of these exciting new prospects for military historians. We’ll first talk about big data: how can we effectively use huge amounts of data that will become available to us through digitization? What can we learn by using larger data sets to make our arguments? Second, we’ll talk about visualizations, a particularly useful way of working with big data. From network graphs to interactive charts and tables, we’ll discuss how visualizations can be used to open up new lines of inquiry or change our perspectives on traditional ideas.

Next in the series, we’ll discuss storage of the big data: databases. How can we help our own projects, and the projects of others, by using databases?

In the fourth installment, we’ll consider deep mapping, which is a specific type of visualization. Mapping is a traditional part of military history, but the capabilities of digital maps and mapping software can help us to evaluate military engagements in new ways.

The series will conclude with a discussion of the potential perils of digital history. Though these new methods can be very powerful and very illuminating, we also have to be careful to use them appropriately.

Abby Mullen is a graduate student at Northeastern University in Boston, Massachusetts. She studies the navy of the United States in the early republic. She is also a fellow at Northeastern’s NULab for Texts, Maps, and Networks, researching for the Viral Texts project.