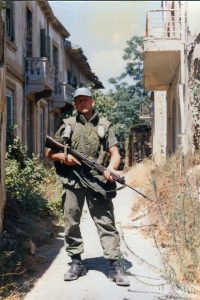 Peacekeeper doing a patrol in the narrow streets of Nicosia. Dangerous in the daytime and worse at night with trigger happy untrained people with automatic weapons. Picture credit Brian Watters

I had a few close calls during the six month period I was in Cyprus.  Whether or not you got hurt, mentally or physically, or had a good time on your tour, it was all random; just like shooting dice.

The whole purpose of the Roving Night Patrol was for the Canadian peacekeepers to walk behind the Turkish lines to ensure that the Turkish side of the agreement had been kept up:  nothing new being built, or no additional troops being moved to the area secretly. This was a must for us since there was constant building activity going on at night.  You could hear vehicles moving around the Green Line separating the warring factions.  Emplacements were being built, hidden by the darkness from the Peacekeepers’ prying eyes. Once I saw the façade of a partially burned out building disappear overnight and, in its place, a new concrete wall stood tall. Both sides proclaimed ignorance as to the origin of it but neither volunteered to remove it either.  Both Greeks and Turks played these games.

At one point I had been tasked with going out on a Roving Night Patrol. The patrol consisted of a Canadian Sergeant, a Canadian Private and a Turkish Liaison Officer. I, being the low man on the totem pole, got to carry the radio on my back. It weighed about 13 pounds and, in a hot environment, your combat shirt was soon dripping with sweat and your back ached.  It was my duty to monitor the chatter over the radio by diligently listening on my headset.  At the same time, I was tasked with keeping our base informed of our whereabouts and updating the higher ups on anything new, as per my Sergeant’s instructions. There was one advantage to carrying a radio; I was armed with a submachine gun, not my usual heavy rifle. The SMG weighed only a little over half the weight of my rifle and could fire 30 rounds in about 3.2 seconds.  A great little weapon for close quarter fighting and I was pleased to have it. 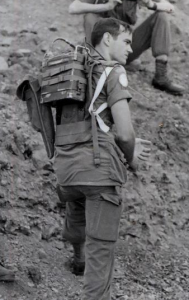 The type of radio carried on roving patrol. ANPRC77. It weighted 13.75 lb (6.2 kg) in the bag on the left hand side of the radio is a 3 ft antenna ( bush/battle whip) and base. Gooseneck mount. a 10 ft antenna. Picture credit Brian Watters

It was around four o’clock in the morning and there was not a sound to be heard. We had been walking for about 3 hours, checking various positions. Up to this point we had not found anything of interest.  It had been a long day and I was tired. Even the simple task of monitoring the radio had become difficult. I could hear a voice in the distance but could not distinguish what it was saying or where it was coming from. I thought it was my Sergeant talking to the Turkish Officer, so I kept walking. Bad move on my part! Once again I heard a voice but I realized it was not speaking English. By now, all my senses were aroused.  The tiredness had vanished instantly.  I then heard the sound of a weapon cocking and a round being fed into the chamber of someone’s gun. This made me stop in my tracks. My body was reacting to the extensive training I had been subjected to as an infantryman. I looked left and then right but nobody was there.  Slowly and cautiously I looked over my shoulder.  Approximately five feet back, there stood my Sergeant with the Turkish Officer.  Unlike me, they had both stopped immediately upon hearing the first challenge.  The Sergeant made a hand motion signalling me to freeze.  He did not need to worry.  I was rooted to the spot and had no intention of moving from it for love or money.  The Turkish Officer said something to the figure in the darkness but nothing happened, no reply.  One could only imagine the turmoil that must have been going on in the guard’s mind. Since many Cypriots spoke both languages, was this a trick by the enemy or was it real? A few moments passed before the Turkish Officer took it upon himself to break the stalemate.  He slowly walked forward and spoke to the figure in the darkened doorway,  a very brave or perhaps foolish act on his part.  When he reached the building a low, muted conversation ensued.  After all, we were in a zone where a police action was taking place! The Sergeant and I waited, holding our breath, wondering how this was going to turn out.  Finally, the Turkish Officer motioned us to move forward to where he was standing with the Turkish guard.  We proceeded very slowly, sudden moves could prove deadly.  There was no moon out and the night was quite dark.  I strained my eyes until I finally could make out a tall Turkish soldier, in full gear, standing there with a gun aimed at our midsections.  He was ready and willing to perforate us without hesitation.  Had I been in his place, my rifle would have been set and ready to wreak havoc.  A quick move on my part when the saga began a few minutes earlier and it would have been all over for me and, most likely, for the other two as well. 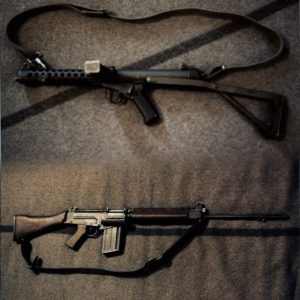 Picture of the Sub-machine gun I was carrying on the roving patrol that night,my normal FNC1 heavy Rifle below . Picture credit Brian Watters

Once we passed this checkpoint, we checked other areas for the next hour and a half. By that time, the day was dawning. The sun was rising and I was going to be alive to see it. We left our Turkish friend at his outpost and went back to our contingent at the Ledra Palace hotel to get some shut-eye.

After we got back to our base, my Sergeant asked me why I had not stopped when the Turkish soldier first spoke.  I told him the headset had muffled the sound of the voice so I did not know where it was coming from or what was being said.  He then cautioned me to be more alert next time since he wanted to get home in one piece to his wife and family. He was not really too upset, he had been one of my trainers when I first arrived in Base London and knew I was a good soldier.

I was sure we gave the Turkish soldier at his guard post a good jolt.  He should have been briefed of our presence but he had not been told there would be people in his area.  Like any other good soldier, he was probably leaning against the door jamb, half-asleep, dreaming about his tour being over and going back to his home in Turkey to live in relative peace for a while.  He could just as easily have been fantasizing about his girlfriend or wife and his nice warm bed.  I am sure he did not want to be in some half burnt-out miserable hovel in Cyprus in the middle of the night, waiting to get killed for some useless cause he did not believe in. When he heard movement, he automatically thought that, possibly, some Greek soldiers were moving around, ready to take him down.  Who could blame him? Any well-trained soldier would have done the same in his place. It was a good thing for us that he was a soldier from the regular Turkish army.  Turkey was known for highly disciplined troops and their combat ready status.  Had he been one of the Cypriot militia, either Turkish or Greek, with little or no training, he may have panicked and shot all three of us dead.  No afterthoughts, no regrets, no feelings of any wrongdoing.  After all, what right did we have to come over here and meddle in their business?  We only got what was coming to us. 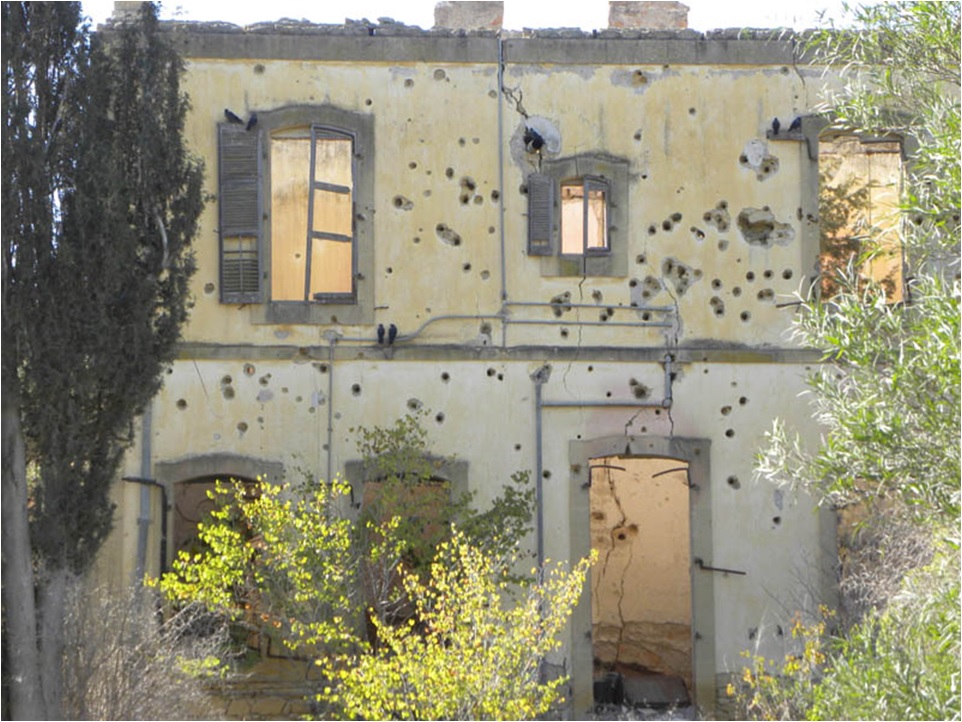 This is what many of the buildings on the green line we patrolled looked like. Picture credit Wikimedia Commons