n December of 2011, three students from HI 341, taught by Matt Symes, traveled to Ottawa to visit the Canadian War Museum and the Beechwood Cemetery.  Noted historian Tim Cook took time out of his busy day to give us the historical context of the museum and explain the historical approach the Museum staff took into consideration as they reworked the exhibits and storyline.  Laura Brandon then took took us through the Museum’s art collection and down to the Art Vault where she graciously shared Canada’s Military Art history.  After a semester of studying Canada’s Military Past through literature, video, and audio, the museum and time with the experts allowed for a deeply personal visit for all three students.  Below are their reflections… 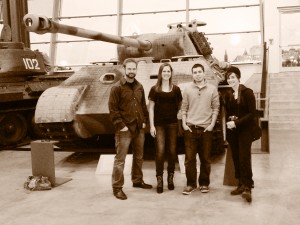 Janine Matetich reflects on HI 341 and her trip to Ottawa

“Nations are formed by the remembrance of great deeds done together.” – Ernest Renan. This quote has emphasized the main argument of course HI341, Canadian Military History, that war has shaped Canada’s identity and culture. Throughout the course students have come to understand the various perspectives of Canadiens, Canadians, Natives, and women in Canada during wartime as well as the issues that have ascended from war,  including the conscription crisis, the depression, and housing issues.

My experience at the War Museum in Ottawa, after taking HI341, has contributed to my understanding of contemporaries during wartime in Canadian history. The museum is divided amongst various wartime eras beginning with the 1800s, moving onward into the twentieth century from the Two World Wars to the Cold War, ending with today’s recent conflicts. The museum accurately portrays various perspectives of the war, from the home front to the soldiers, allowing for a greater understanding of how Canada has been shaped by its involvement with war. With a militia army and constant portrayal as second to Britain, Canada rarely received credit on the World stage. Although we cannot experience the times for ourselves, the museum was able to draw into perspective Canadian soldiers’ great contributions and sacrifices for their fellow countrymen. After visiting the War Museum in Ottawa and taking HI341 I have come to understand that, through war and conflict, Canada has been given a greater sense of identity.

Eric Reis Reflects on the experience at the Museum and After

Our tour through theCanadianWarMuseumproved to be the most tremendous experience of the trip. By combining various teaching elements and by diversifying tour guides, this particular segment of theOttawatrip allowed us to immerse ourselves with Canadian history in a unique way.

First, on entering the museum, we were promptly met by Tim Cook, a respected Canadian military historian employed by the museum, whom immediately engaged us with the building and its purpose. While his private lecture was quick, it was highly comprehensive as it contextualized the museum’s development, style, mechanics, controversies, and purpose.  Moreover, Cook’s private lecture challenged us to think past the artefacts as individual pieces of history, and instead see them as pieces of a greater picture. It was within this fashion that Cook’s lecture challenged us to view the museum critically as being one of either two distinct and fundamentally different cases; one, as being an institution which taught history through a collection of artefacts with a story, or what he believed to be the purpose of the Canadian War Museum, to teach the story of Canadian military history irrespective of artefacts onsite. Nonetheless, Cook’s lecture was crucial to our overall experience as it established for us new perspectives in order to engage with not only the material within the museum, but the overall effectiveness of the institution in general.

Our private tour with the museum’s Historian of Art and War, Laura Brandon, was truly a unique opportunity which changed the way we looked at history through art. On meetingBrandonshe set us to work immediately, asking us to scan art from every wing of the museum and examine its importance to the overall purpose of the institution.Brandon’s private tour through the museums established exhibits involved an even more engaging experience as she challenged us to assess the exhibits themselves based on the art which was present. It was within this context that we connected with the exhibits, and more importantly, the history they portrayed in ways which were new and unknown to us.Brandon’s subsequent tour into the museum’s vault, where we had the rare experience of viewing thousands of priceless works which have thus far been concealed, was equally as impressive and engaging. By the end, Laura Brandon had demonstrated to us the importance of war art as a critical medium in which to understand events. 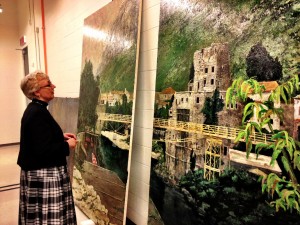 Laura Brandon in the Vault

While the museum tour was explicitly beneficial, an after-event debriefing conducted by Matt Symes allowed us to bring together what we had learned. By coming together to understand various perspectives, we effectively gained knowledge and new perspectives on the museum and war art in general from each other.  This forum invited us to bring out concerns and arguments on the material covered at the museum as well as the overall effectiveness of both presenters. Although the value of both talks and the tour in general is unquestionable, it was highly advantageous to voice what exactly we had gained from the experience.

Thus our unique and engaging experiences at theCanadianWarMuseuminstilled in us more than just a new appreciation for history in general.  Our private talks with Tim Cook challenged us to look at the museum for more than a collection of artefacts, while Laura Brandon demonstrated the importance of viewing history through varied mediums, particularly war art. Our post-event debriefing brought out into a professional forum, the lessons we had learned from the tremendous experience. I speak candidly when I say that the tour was one of the greatest complements to our university careers.

After touring the battlefields of Northern France and Belgium this summer, I became fascinated with the graves of Canadian veterans and war dead.  Cemeteries are not merely depositories for dead bodies, but sacred places where history can be tangibly measured.  So when I first saw the 2,400 headstones emerging from the Cross of Sacrifice at Beechwood Cemetery in Ottawa, I could hardly contain myself.  So many questions crossed my mind: How would the individual stones be maintained?  In which conflicts did most of these men and women serve?  How positively are their memories reflected through this cemetery?

Having done little research on the cemetery beforehand, my expectations were quite low.  Most veterans’ graves I have visited in Ontario – such as in Prospect Cemetery in Toronto or Mount Hope in Kitchener – are tragically neglected.  Erosion, practicality and time have resulted in their illegibility and misalignment.  Managed jointly by the Beechwood Cemetery Foundation, the Department of National Defence, the Commonwealth War Graves Commission (CWGC), and Veterans Affairs, the National Military Cemetery at Beechwood is indeed an exception. 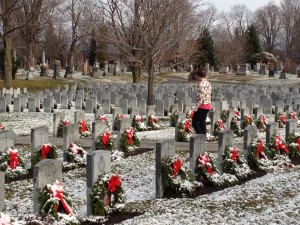 While some of the inscriptions and epitaphs, especially those belonging to older veterans, are weathered and difficult to read, the design and layout of the graves are comparable in both beauty and magnitude to cemeteries managed by the CWGC overseas.  Located in four sections of the cemetery, the graves of those who died on active service, whose death was related to service or who served and chose to rest among their comrades fan out in seemingly unending rows, commanding respect and veneration.  Adding to the serenity of the cemetery, every headstone in the National Military Cemetery was graced by a green wreath, laid only a few days earlier by the organization Wreaths Across Canada as part of new initiative to express thanks to those who have served.

Unfortunately, neither the amount nor quality of epitaphs at Beechwood matched the cemeteries in Northern France and Belgium, where nearly every headstone contained a brief yet powerful inscription in honour of the deceased.  At each cemetery I visited in Europe, I vowed to find one headstone and inscription that resonated significantly with me.  At Beechwood Cemetery, this proved quite difficult as the inscriptions and epitaphs were much less detailed, thus providing less insight into the lives of these brave men and women.  After much searching, I encountered the headstone of Corporal Arthur W. Craig, who died 17 June 1946.  Although the vibrancy of the marker had faded and the engravings had lost their shape, his epitaph poignantly described the sacrifices of all those resting in the cemetery:  UPRIGHT IN HEART, TO US THE BEST YOU GAVE.

After over two hours in Beechwood Cemetery, grasping the impact of the procession of headstones still seemed an insurmountable task.  Sauntering through these gardens of stone was a powerful yet restraining, tranquil yet unsettling experience.  To see these graves on home soil emphasized the fact that war does not merely affect people in remote countries, but the men and women in our very own backyards.