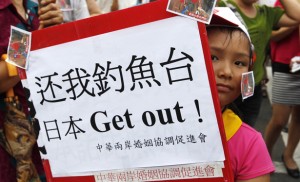 A girl holding a placard reading “Give Diaoyutai back. Japan get out!” takes part in an anti-Japan protest in Taipei September 23, 2012. Hundreds of activists marched through the streets to protest against Japan’s purchase of the disputed islands – called Senkaku in Japan, Diaoyutai in China and Tiaoyutai in Taiwan. REUTERS/Pichi Chuang (TAIWAN – Tags: POLITICS CIVIL UNREST)