A Narrow Escape from a Bridge too Far, Part I – by Dacker Thicke

This post is the first in a series chronicling the life and wartime experiences of Dacker Thicke. Born on 18 January 1924 in Kirkland Lake Ontario, Dacker joined the Canadian armed forces at the tender age of fifteen in 1939 and was discharged for long service in 1945. He was overseas in active service for five and a half years.

A Narrow Escape from a Bridge too Far, Part I 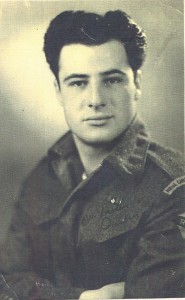 I am now a ninety-year-old man, but in September 1944 I was a rather fearless twenty-year-old. I had been overseas fighting as a soldier since the very beginning of the Second World War as I had enlisted illegally at the age of fifteen. I had left my hometown of Kirkland Lake, Ontario after completing a ten month stint in reform school. I was the town bad boy and when I returned I felt as if I wasn’t wanted, so I left to go fight in the war, lying about my age (which is quite a story on its own). I had grown up fast as was necessary for my survival. I was no longer a child by any means. I was rough and tumble and looking for action and boy, did I find it. I never came as close to losing my life as I did during the Battle of Arnhem. On two separate occasions I was spared and I ended that battle with a Military Medal. Below you will find my eyewitness account of the Battle of Arnhem as well as my citation for the Military Medal.

I was a member of a three man crew operating as reconnaissance scouts ahead of our unit, though we often found ourselves free for other duties when needed as was the case in this incident. I was conscripted to take over an inboard motor launch (because I had a certificate to operate water crafts which also afforded me an extra twenty-five cents a day) being used to transport officers or casualties when needed to medical facilities. I was quite busy ferrying the wounded across to be brought to the medics and when I wasn’t transporting wounded I was speeding down river because we had to keep moving our position.

I was working as a sapper engineer, our unit the 20th Field Company RCE was involved in using large pontoon boats that were capable of moving tanks or large guns on their decks to ferry across a river. The pontoon boats had four two hundred horsepower outboard motors on each corner to move the large pontoon bridge craft over any flooded areas. In this case the Germans broke the Nederrjin river walls to flood a very large area close to the town of Arnhem. During the whole operation we were constantly being shelled by tiger tanks firing 88mm shells from as far as five miles away.

We had to change our position constantly as the Germans kept finding our location by sending spotter planes. Every time we saw one we had to change locations as they would soon begin shelling that spot. We were already taking casualties during these moves and had to be constantly finding different places to load the equipment from.

I would follow behind in my launch transporting casualties if there were any. I was on my way to follow the company downriver when my launch suddenly stopped. I moved to the back of the boat to check the motor. When I lifted the motor hatch my problem became obvious. I had become tangled in concealed street telephone wires which had wrapped themselves around my propeller motor. I was traveling over a flooded civilian area but it never occurred to me that there would be submerged telephone poles and now a whole mess of wires had wrapped themselves around the motor so the propeller would not work until I removed those interfering wires.

Using my wire cutters I proceeded to cut the many yards of wrapped cable that snaked around the propeller, making it impossible to keep using the motor until the wires were cleared. It was taking a considerable length of time as was evidenced by the build up of a large pile of cut wire in my launch. Cutting the wire was time consuming. I had to kneel down between the motor and the launch rail and drag it out before cutting it. It had to be done before the boat would move. I had no concept of time as I was dragging, cutting, and then piling the wire in an ever increasing mound on the deck of the launch.

Then I heard the sound anyone in my position would dread—the shrill whistle of a landing shell. There was nowhere to hide, so all I could do was crouch down and hope the shell didn’t land too close. I remained kneeling down in the boat and the shell landed about ten or fifteen feet ahead and beside me.

My immediate thought was that I was going to be blown to pieces. Instead, a large fountain of water, grass and dirt flew up into the air and tipped my launch completely sideways so I was looking downwards. I clutched the rail of my boat and rode the tremendous wave caused by the explosion. I looked straight down and I swear that for just a split second I could see the bare ground where the river was supposed to be. It was some thirty feet under me and about the length of a telephone pole.

The water rushed back and the launch righted itself miraculously. I thought that I would surely capsize due to the giant wave of water rushing back in place. What had happened, as near as I can figure, was that normally a shell explodes on contact, but in this case the shell dropped almost straight down and instead of exploding when it hit the water, it exploded when it hit the river bottom and all the force of the blast was directed downward and shot the water straight up, which gave me the brief chance to see the ground under the water. I wasn’t hurt but frightened beyond description. Shakily, I continued to dislodge the wire. Under fear of more shells raining down on me, I doubted that I would be so lucky as to be missed a second time.

Finally, after removing a final large portion of wire, my motor started and I immediately set off. I could not get away fast enough for my liking. I willed that motor to go faster, as I seemed to be moving at a snail’s pace. All around me I could hear shells, and it seemed to me as if I was running through a mine field while all around me was the haunting, whistling sound of shells landing. None of them were anywhere near as close as the shell I had narrowly avoided, but you never know when your luck will run out. The motor kept moving me surely and steadily downstream closer to safety. A few miles downriver I found my company and a very angry officer who immediately threatened me with a court martial for hiding from the action. I pointed to the huge pile of wires still in the back of my boat and explained what had happened. As I told him my story his face drained from the red of anger to a pale white. I described my close encounter with the shell, and as he surveyed the load of wire it dawned on him that he was looking at what should by all accounts have been a dead man. Even if he hadn’t believed me, I had ample evidence to explain myself with my boat half weighed down with cut wire.

Dacker Thicke is an accomplished and published author of four books, one of which, Piper To The Rear, shares accounts of his military service. He is the uncle of both Alan and Todd Thicke and is the father of Lori Thicke, who is the President and co-founder of Translators Without Borders. Dacker has lived a long a full life and likes to boast that he has worked any job that is worth having and a few that aren’t. He even has a pilot’s license and has flown float planes for many years, and has also started a number of different businesses. Dacker’s books can be purchased through amazon.ca.