[ACUNS] Review of Frank Chalk and Romeo Dallaire et al. ‘Mobilizing the Will to Intervene’ by Neil O’Reilly

This is the first installation of a new book review series launched by the Academic Council on the United Nations System (ACUNS) in cooperation with LCMSDS. In addition to our regular book review series published by Canadian Military History, we will also be cross-posting ACUNS reviews periodically. Further information on books available for review and submission guidelines can be found by clicking on the links or visiting www.acuns.org.

Mobilizing the Will To Intervene: Leadership To Prevent Mass Atrocities is an edited and updated version of a report prepared by the Will to Intervene (W2I) project, based at Concordia University’s Montreal Institute for Genocide and Human Rights Studies.[1] This book is designed for American and Canadian policy and law makers to reconsider their conceptions of national interest, and to re-imagine extraterritorial genocides and mass human rights atrocities as constituting a tangible threat to national security. The book follows from and builds on ideas, arguments and recommendations articulated in both the 2001 Responsibility to Protect[2] report by the International Commission On Intervention and State Sovereignty, and a 2008 report by the US Genocide Prevention Task Force, Preventing Genocide: A Blueprint for U.S. Policy Makers.[3]

The preface to the main body of the work, written by Frank Chalk and Romeo Dallaire as co-directors of the W2I project, and credited as two of five co-authors of the book, clearly lays out their intention and intended audience. They state that the “fundamental goal of this book is to is to identify strategic and practical steps to raise the capacity of government officials, legislators, civil servants, non-governmental organizations (NGO’s), advocacy groups, journalists, media owners and managers–in both the US and Canada–to build the political will to prevent mass atrocities” (p. xvii). Added to this list of actors should be the electorate of each nation, along with students of international politics, those interested in humanitarian issues, and military personnel who may be called on to implement interventionist policies. In terms of mass appeal, Dallaire’s reputation as a vocal and stalwart proponent of pro-active engagement in humanitarian crisis, and recognizability to Canadians, may broaden the readership of this book beyond its intended audience. 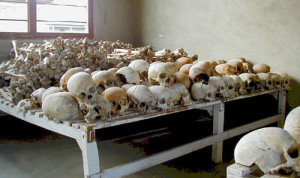 The main body of the book is broken into three sections. The first part introduces the premise that the prevention of genocide and mass atrocities is a matter of national security and national interest. The authors recognize that appeals to morality have not proven an adequate incentive to prompt governments to take pro-active steps in the face of humanitarian crisis. In order to assuage this reluctance they attempt to reframe the debate by redefining and broadening traditional conceptions of national security and national interest. In this section they detail a list of drivers of violence. This is followed by a list of the costs inherent in not taking proactive measures against emergent security threats, as defined by the new paradigm.

This section of the book presents explications of the arguments in question perhaps too succinctly. In identifying a series of drivers of violence, the authors cram the explanations of each into either one or two paragraphs. The following section on the costs of inaction is equally concise. While important points are identified, there is inadequate development of analysis on how these issues directly impact Canadian and American interests. Considering the premise of the book lays in the notion that genocide and mass atrocities pose security risks to both Canadian and the US interests, these points deserve more discussion than they are given. While one can credit the authors with being precise and concise in their arguments, this section of the book comes across as a series of talking points and could have been fleshed out more fully.
Assessment photo of internally displaced persons (IDPs) in Kosovo 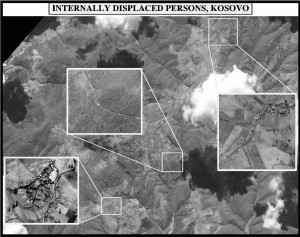 The second part of the book presents case studies of both the United States and Canadian governmental responses to the situations in Rwanda in 1994 and Kosovo in 1999. In this section the processes of decision making that led to the particular courses of action are revealed through interviews with and commentary from people who participated, both directly and indirectly, in the process of deciding whether or not to intervene (pp. 141-147). The interviews provide detailed accounts of the moods, motivations and personalities of those people in Washington and Ottawa who were involved in forming policy, calling for action (or inaction), and ultimately deciding on what or what not to do.

This section is the highlight of the book. It is an incredible exposé of near whimsical policy concoction brought about by competing ideas, personal interests and poor communication within and between the most powerful echelons of Canadian and United States governance. It also exposes the media’s role in either raising awareness or ignoring crisis situations, and stoking the domestic political will to take action. Unfortunately participation by Bill Clinton and Jean Chrétien–the US President and Canadian Prime Minister at the time of these crisis situations–is absent from the study. Although a detailed picture is formed, their input would have crystallized the investigation into the decision making processes. Regardless, this accounting is not only valuable to the study of the situations in and of themselves, but perhaps more so, as the authors intended, as a “lessons learned” guide to reforming the decision making process when confronting inevitable future occurrences of mass atrocity (p. xvii). It must also be noted that, for the Canadian reader, this section exposes the depressing failure, if not outright inability of Canada to have assumed any sort of leadership during each crisis. If the processes of decision making as detailed in the book persists, then the paradigm shift proposed by the authors is embarrassingly overdue.

The third part of the book is divided into four sets of policy recommendations. Given the differences in governance structures between the US and Canada, each respective country receives its own politically relevant litany of advice, albeit under the same rubrics. Recommendations are divided into three sets for governing bodies, with the subcategories of “enabling leadership”, “enhancing coordination”, and “building capacity.” A separate set of recommendations, titled “ensuring knowledge,” is aimed at civil society groups and news media outlets as vehicles to pressure governments who neglect their responsibility to protect.

Though the language of the policy recommendations requires some understanding of both United States and Canadian governance and military structures, each point is backed up by both an explanation and practical recommendations on how it should be implemented. The heavy emphasis on recommendations for the establishment or strengthening of government departments implies that mobilizing the will to intervene is a top down process. Laity is not excluded from the discussion, as the authors provide realistically implementable recommendations for civil society groups. Recommendations for the media, however, seem much less actionable in market driven, budget conscious newsrooms.

This book presents an evolution in thinking about the purpose of intervention, and makes a fitting addition to works such as Martha Finnemore’s The Purpose of Intervention and Nicolas Wheeler’s Saving Strangers.[4] It must be noted that the line of reasoning presented in this book has gained political traction as the Obama administration has instituted an Atrocities Prevention Board, premised on a view that the prevention of mass atrocities and genocide are a “core national security interest and a core moral responsibility.”[5] In light of the situation in Libya and its spill-over effects in Mali it will be interesting to see what the authors have to say in either an updated version of the book, or a continuation of the study.

See also The Will To Intervene Project at: migs.concordia.ca/W2I/W2I_Project.html

For a broadcast of the launch of the Will to Intervene Project in Washington and Ottawa see: migs.concordia.ca/W2I/w2i_launch.htm

[4]Finnemore, M., The Purpose of Intervention: Changing Beliefs About the Use of Force, Cornell University Press: Ithaca, 2004.