The phrase “military ethics” carries a certain meaning within the fields of those who traditionally have been members of ACUNS, namely scholars and practitioners of international relations and international law (including military law). That meaning is the ethical standards of behavior that govern the resort to military force and the methods and means of military operations (jus ad bellum and jus in bello, respectively). This edited collection of essays, however, is not about that form of “ethics,” but rather the ethical standards of conduct by military members within their organizations. 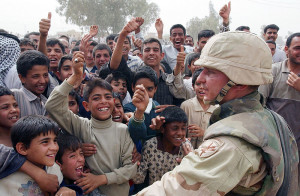 Jubilant Iraqis cheer U.S. Army Soldiers at a humanitarian aid compound in the city of Najaf.

There is an inherent tension between these two dimensions of military ethics. On one hand, good order and discipline within a military organization is essential to its success at the tactical, operational, and strategic levels. Military success depends on commanders being able to rely on their subordinates to follow their orders, and also on the subordinates being able to rely on each other for mutual protection and support. On the other hand, the old adage “I was just following orders” has rationalized too many tragedies in military history. Individual military members must also be able to discern when the facts on the ground are such that blindly following orders would actually impede success—or worse, constitute a manifest violation of the law of armed conflict. Balancing those competing interests and resolving those tensions is quite difficult. This book does not appear to offer any significant insight into that problem, assuming that this weighty problem is even solvable.

The value of this book, rather, is in problematizing the contemporary settings in which lapses of personal ethical conduct among the military are most likely to occur, and in offering several models for designing formal, institutionalized, programs for inculcating ethical values into the members of modern military organizations. In that vein, the audience for which this book has the greatest value is those professionals, both military and civilians, who are charged with designing such programs. The book contains comparatively little on the actual content of ethical standards of behavior, beyond the broad admonitions that military members must display courage and integrity, which they and the readers already know. Put another way, trainees in the standards of personal conduct will not find this book useful, but the trainers will.

The book is not without weaknesses, some of which are probably simply endemic to edited volumes. The quality of the chapters is varied. Some are quite informative to the reader who is unfamiliar with the scholarship of this particular type of “military ethics.” Others appear to have been included due to the position of the author or for the sake of maintaining a priori cultural diversity, for they stray from the primary focus of the volume and do not advance the reader’s knowledge of the problem at hand. A few chapters would have benefited further from more rigorous copy editing in order to improve the language and style.

The portions that should prove to be of greatest value are Chapters 2 and 4 through 8. I would, however, recommend that the reader begin with Chapter 4, titled “Ethics in the 21st Century Profession of Arms: A Context for Developing Leaders of Character.” This chapter highlights the need for military training programs to react to the rapid changes in expertise, responsibility, and corporateness, the three Huntingtonian dimensions of the military profession, which have taken place over the last generation—along with the challenges that the changed security environment poses to the same. The authors of Chapter 4 are particularly concerned about finding ways to overcome those challenges.

The challenges themselves are outlined in more detail in Chapter 8, “Morally Challenging Situations: Potential Sources of Moral Stress in a Military Context.” This chapter, which I recommend be read second, is a discourse on several sources of moral stresses. These include being forced to tolerate attitudes in a different culture that are morally offensive in one’s own, insufficient support from organization/leadership for taking action to protect innocents from immediate harm, and the fear of making the wrong decision when confronted with a moral dilemma. 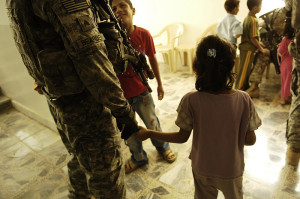 Solutions to these problems are proposed in Chapters 2 and 6. Chapter 2, “Ethics Research: Moral Psychology and its Promise of Benefits for Moral Reasoning in the Military,” orients the reader who is unfamiliar with moral psychology with its cornerstone, the work of Lawrence Kohlberg, and introduces a neo-Kohlbergian model for moral behavior in the form of a Four Component Model developed by James Rest. The chapter then makes the case that ethics education will actually have an effect on military members’ moral judgment and reasoning. The chapter, however, also finds that improvements in moral judgments and reasoning do not necessarily result in increasingly moral behavior. This seems like a disturbing finding, particularly for the profession of killing people and breaking things, but if this pessimistic outlook is objectively warranted then it is best that such a finding be out in the open.

Chapter 6, Developing Responsible Leaders – Ethics Education at the Swiss Military Academy,” also reports a similar empirical finding: that the basic moral beliefs of the officer corps and their cognitive abilities to recognize moral differences have little impact in their decisions in specific conflict situations. This chapter, however, is more optimistic for it makes a case that their ethical behavior can be improved. In a thread of logic not dissimilar to Yuen Foon Khong’s book Analogies at War (1992), the chapter attributes significant effects on ethical behavior to analogizing one’s current conflict situation to prior experiences. This claim, if true, opens up the possibility that moral behavior can be improved by intervention. The form of intervention recommended in this chapter, “Mission-Specific Dilemma Training,” is a coherent series of specific scenarios from which the officers may then generalize broader principles of ethical behavior. I suggest that this is likely the most valuable lesson of this volume, for there is a tendency within the academy to teach the abstract and expect one’s students to apply broad principles to specific situations. Chapter 6 suggests that the reverse is actually more effective, at least within the military profession. It would explain, among other things, the strong preference of some military organizations—including, as one example, the U.S. Air Force—to focus their law of armed conflict training on the teaching of specific rules.

Chapters 5 and 7 address some interesting problematiques. Chapter 5, “Preparing Value-Based Commanders for the 3rd Generation Singapore Armed Force,” examines ethics education in an environment in which the rank and file is as well educated—and often even more so—than the leadership. This societal feature may undermine the traditional source of military authority, which I would call the “aristocracy” of the officer corps (though the author does not call it this). Such a development seems likely to occur in many first-world countries. If this is true, then the need, as proposed in the chapter, to design ethics education in a way to build the “moral authority” of the officer corps, not merely the intellectual, technical, and social authority, is further underscored.

Chapter 7, “Analysis of Ethical Conduct within the Australian Defence Force,” reports on a survey of officers in which a pattern of ethical lapses in deployment situations was revealed. This chapter concludes that an environment of perpetual deployment is “more ethically risky” than an environment of prevailing peace. This is probably already intuitive to the military professional, but it also suggests that ethical lapses are more likely to occur during wars of choice than wars of critical necessity.

As contemporary military operations shift from classical warfare to counter-insurgency, peacekeeping and peace enforcement, and anti-terrorism, the link between strategic success and military ethics appears to have grown stronger. Good order and discipline in the ranks is necessary for success, but so are ethical checks on commanders, however risky they may be for the subordinate. The challenge for military organizations today is to devise training programs that will effectively teach the subordinate how and when one’s personal code of ethical conduct must overcome the presumption that orders must be followed. Although flawed in several respects, this book has the potential to assist military organizations in meeting that challenge.