From our friends at ACUNS.

The first section of A Stability-Seeking Power provides an in-depth discussion on the methodology applied to this work. Paquin explains everything in depth for the reader. He clearly states why the stability-seeking argument is important to examine; namely that it provides insight to international stability and a framework for United States’ foreign policy. In the second half of the book, Paquin provides a detailed discussion on the secessionist movements in the Former Republic of Yugoslavia and the Horn of Africa. 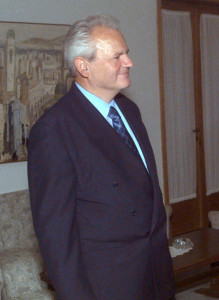 Slobodan Milosevic stood in the way of internal stability in Kosovo.

The discussion on the secessionist movements in Yugoslavia is very clear and succinct. Paquin provides a brief historical analysis of the collapse of Yugoslavia and of the movements in the respective emerging states. He begins with the discussion on how Croatia and Slovenia successfully negotiated succession and recognition from the United States. Serbian forces fighting in Croatia meant that there were a large number of Croatian refugees and the fighting eventually spilled over into Bosnia. Paquin suggests this expansion of conflict threatened the stability of Yugoslavia and subsequently the entire region. In contrast to the recognition of succession in Croatia and Slovenia, Macedonia was not recognized immediately by the United States. As Serbia was engaged in a conflict with Croatia, Macedonia managed to peacefully and quietly succeed from Yugoslavia. Paquin argues that Macedonia had internal stability, as it had democratically chosen to succeed, and external stability through recognized territory. The instability grew due to conflict with Greece over the name Macedonia as the Northern Province in Greece is also called Macedonia.  The recognition of Macedonia as a state by the United States would create tension between the United States and the European Union, especially with Greece. Therefore, recognition was delayed. Paquin suggests that Kosovo is also not recognized as a sovereign state because it lacks the internal stability, the features of a state, and it could not guarantee external stability.

The next section of the book turns to the Horn of Africa and the secession of Eritrea and Somaliland. Eritrea was acknowledged, by the United States, as the conflict between Ethiopia and Eritrea created many refugees that fled the region. The conflict also threatened to spill over into neighbouring countries of Sudan, Kenya, and Djibouti. Paquin argues that to maintain both internal and external stability in the region the United States had to recognize Eritrea’s secession. The United States did not, however, recognize the secession of Somaliland. As the government in Somalia weakened, Somaliland sought independence. Paquin suggests that the United States was worried that recognition of Somaliland would lead to another failed state in Africa. Somaliland, however, managed to create a stable and democratic state, with its own constitution, government institutions, and judicial system. There was no need for the United States to recognize Somaliland in order to create stability; both internal and external stability was already present. 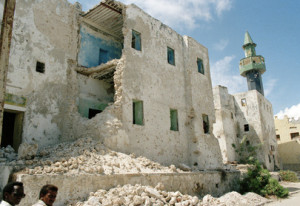 Part of the destruction from the Somali civil war with Somaliland.

Paquin concludes that the stability-seeking argument provides the best understanding in the United States’ recognition of secessionist states. He also proposes that this stability-seeking theory outweighs the domestic factors that could potentially support the secession of a state. Paquin gives credit to the domestic factors that could have influenced the decisions to recognize states but he has a tendency to downplay the importance of domestic influences, such as ethnic lobbies and business interests. Paquin’s argues that the secessionist and nationalist sides are cancelled out by ethnic influences. Paquin states that domestic pressures do not influence the recognition, but he does not provide an adequate discussion regarding the other outside influences. He briefly mentions the pressure the European Union exerted on the United States as it was considering recognition of Macedonia. In the final section he mentions that these regional powers had some influence but ultimately did not change the United States’ goal of seeking stability. This section of the discussion would have benefited from further detail and attention.

A Stability-Seeking Power provides a comprehensive discussion on the recognition of secessionist states. The stability-seeking theory allows for a better understanding of the motivations behind the recognition of secessionist states. It pulls back the curtain on the seemingly contradictory foreign policy of recognition in the United States. This book also illustrates the motivation behind foreign involvement in ethnic conflicts.  Paquin not only illustrates the motivation behind the United States’ actions but also clearly discusses the motivation behind the secession. Both the United States’ and the secessionist states’ stances are examined and discussed in detail. Overall, A Stability-Seeking Power is an enlightened and accessible book for anyone interested in United States foreign policy and international relations. The book is clear and very easy to follow. Paquin takes the reader step-by-step through the methodology, the selection of the cases, alternative arguments, and the implications of his study.