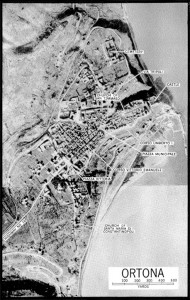 “…we are astride the lateral road on our left flank and command a ridge overlooking Ortona, which lies two miles beyond. But the enemy still occupies the town and holds a number of heavily defended draws and fortified houses which intervene. One of the most stubbornly defended of these locations lies just beyond the crest of the ridge in the deep furrow that carries the Torrente Saraceni, known to us all as “the Gully.” Two Canadian battalions have suffered heavy losses attempting to reduce this resistance. Just two days ago elements of the Royal 22nd had accomplished this outflanking manoeuvre by mounting a daring attack along the axis of the lateral road. In face of heavy resistance and in a desperate hand-to-hand effort they captured a fortified farm house known as the “Casa Berardi.”

“Every effort was being bent toward the major objective of clearing the enemy from Ortona with the port facilities intact, if possible. The liberation of the two would be a moral victory, but if we could make use of its harbour, following the clearance, the victory would be a strategic one as well. The atmosphere at Divisional headquarters was tense. The grave determined faces of operational officers reflected the grim malignant nature of the battle we were joined in. they were resolute faces from which the earlier buoyancy had temporarily vanished. There was little or no small talk around the messes; conversation centred around the ebb and flow of battle. We had three brigades up, no reserves; expenditures in men, equipment and ammunition were high, replacements disappointingly low. And then there was the weather and the exasperating conditions it brought on. Added to all this was the fanatical character of enemy resistance. Lots of room for sleepless concern for those who did the thinking and made the decisions.

The site of the headquarters did little to sustain the waning spirit. We were concealed under nets and garnish in a flattish olive grove that had been ground and churned into a depressing morass of extraordinarily plastic mud. Water-filled ruts, two feet deep, made movement in any direction an amphibious operation. The air was charged with the concussion of gun-fire which rose in deafening chorus from artillery sites crowded all about us.”