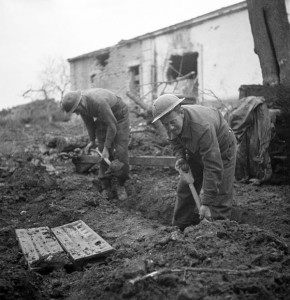 The first day of the set-piece attack by 1st Canadian Infantry Brigade involved both brilliant success and costly failure. The 48th reached their objective with light casualties. A troop of Three Rivers tanks ignored the threat of mines and “walked on eggs” to reach the infantry. They announced their arrival by shelling the Highlanders. A tank Corporal apologized but explained “One of you muddied goofs looks exactly like these other muddied goofs.”

The Royal Canadian Regiment were to follow the “Orange Blossom” barrage directly to “Cider” but when shells fell short, striking Canadians south of the “Gully”, the barrage was stopped, exposing the RCRs to German fire from the “Gully” flank. “RCR casualties, among which were all the officers of C and D companies…” forced the RCRs to dig-in just 100 yards beyond their startline. “Cider” and “Gully” were still controlled by the German paratroopers.