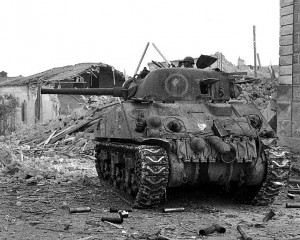 “We became involved in a vicious circle. The infantry would be brought up to form a bridgehead over a rubble path. It would be necessary for them to clear mines under cover of smoke or else to extend the bridgehead further to allow the sappers to work. Under such circumstances, the leading infantry got to a point where it needed tanks in support to shoot up the upper floors of buildings. If the infantry lost contact with the sappers the tanks did not get up in time. The whole operation, therefore, suffered a loss of momentum.”

Nevertheless individual courage and enterprise could accomplish much and almost at the outset of the attack a shining example of soldierly behaviour pointed the way to success. On December 22nd, when A Company was halted by machine-gun fire, the supporting tanks came forward; but they in turn were held up by mines until Sergt. G.A. Campion filled his pockets with smoke grenades, dashed ahead and laid a smoke screen. When the smoke thinned he rushed out and laid another, on both occasions under heavy machine-gun fire. In this fashion, the main street was cleared as far as the second square, the Piazza Municipale. During that day, C Company also came into action in a raid which detoured around the western rim of the city and seized a sports ground to its northwest, thereby covering the left and the rear of the assault companies in the town.