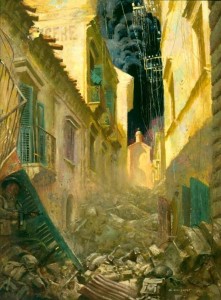 "Via Dolorosa, Ortona" by Charles Comfort.

“As the Canadians penetrated further into the built-up portion of the town, they found that after clearing the first house of a block, they could move to the next either through the street or by jumping across the balconies. By both methods they became exposed. “Mouse-holing,” blowing through the walls of one house into the next, then became one of the chief characteristics of the fighting. One company commander afterwards recorded how this method was employed for the first time by his men:

‘The two pioneers went to work to prepare the first ‘Beehive’ on the top floor. To get the right height they placed the ‘Beehive’ on a chair and leaned it against the wall. While the ‘Beehive’ was being set I gathered all my men on the ground floor. With the fuses set the pioneers tumbled down the stairs, and as they reached the ground floor, there was a loud explosion. We all tore up the stairs in order to get through the mouse-hole before the dust subsided, but there was no hole. What we thought was one wall was actually two walls. Against we set a ‘Beehive’, went through the same routine as before, and this time found ourselves in the next house.

The leading section into this house was the follow up section. It immediately cleared the floor and manned all windows covering the house on the opposite side of the street. The first section then came through, cleared the next floor up, then moved down and cleared the bottom floor.’”