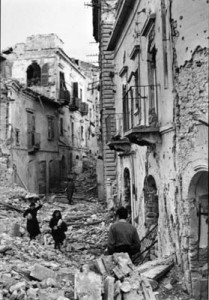 One of the narrow streets of Ortona, filled with rubble. PA-153938.

“Ortona was essentially a battle-ground where success or failure depended on the individual initiative of junior leaders. Sections, platoons and companies became separate entities isolated in small worlds inside a crumbling city; dust and smoke curtained attacker and defender from beyond their immediate house or block. Courage and ingenuity were the essential human factors which won Ortona; for without courage, ingenious methods could never have been utilized; without ingenuity, courageous deeds lost their purpose. Battle in no way subsided over Christmas and Boxing Day. Slowly and with increasing casualties, the Edmontons forced their way towards the castle, and the Seaforths towards Via Monte Maiella.

As the Canadians forced their way deeper into the town, their lives became strangely intermingled with those of the civilians who had not been herded northwards by the enemy. The part of the population which remained had taken to the basements: here the troops, temporarily resting, or waiting until a tank had blown down an enemy-held building which was resisting their advance, shared the underground homes of the townsfolk. Children, tired and terrified, scarcely doubted that Father Christmas had overlooked Ortona that year. One observer who found himself in one of the basement living rooms wrote:

What a strange clutter of humanity it was. There were some five or six Canadian soldiers, there were old women and there were children innumerable. A painter of genius – Goya, perhaps might have done justice to the scene. I felt no verbal description could do so. In the half-darkened room the pasta for the midday meal was simmering over the fire in the corner, Haggard, prematurely aged women kept emerging shyly one after another from some inner chamber where an old man, the grandfather of the numerous children, was dying… Another old man was uttering maleductions against Mussolini…”