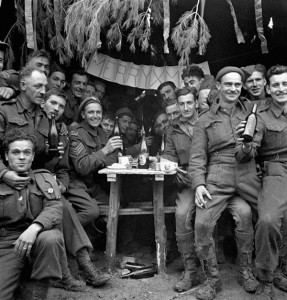 “The Q.M. Capt D.B. Cameron spent a busy morning fixing up details for the Christmas Dinner to be held in the church occupied by B.H.Q. The Protective Group sent parties of men around and ruined houses in the town collecting chinaware.

The setting for the dinner was complete, long rows of tables with white table cloths, and a bottle of beer per man, candies, cigarettes, nuts, oranges, and apples and chocolate bars providing the extras. The C.O., Lt-Col S.W. Thompson, laid on that Companies would eat in relays in the order C.A.B.D, as each company finished their dinner, they would then go forward and relieve the next company. The first company was to be in at 1100 hrs. 2 hours was to be allowed for each company for dinner. The menu… soup, pork with apple sauce, cauliflower, mixed vegetables, mashed potatoes, gravy, Christmas pudding and mince pie. 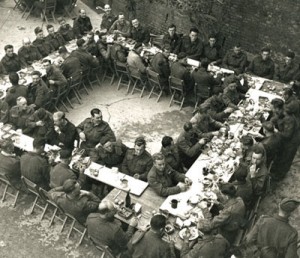 The Seaforth Highlanders ate their Christmas dinner and went back to fighting. PA152839.

C Company was the first Coy to eat Dinner at the church, a dinner that no one had felt possible under such conditions… when the last man of the Battalion reluctantly left the table to return to the grim realities of the day, there was an atmosphere of cheer and good fellowship in the church. A true Christmas spirit. The impossible had happened. No one had looked for a celebration of this day, December 25th was to be another day of hardship, discomfort, fear, and danger, another day of war. The expression of the faces of the dirty bearded men as they entered the building was reward that those responsible are never likely to forget.”