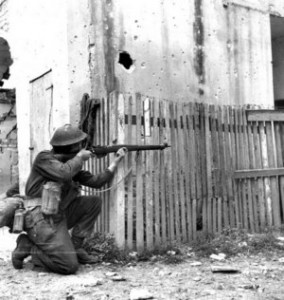 The German paratroopers launched a major attack on the 48th Highlanders at 1430 hrs just after three Sherman tanks of the Ontario Regiment arrived. The tanks went into action immediately and the paratroopers were driven back in a panic.

It was a sharp, complete and rather an amazing victory. Nowhere in the entire series of December battles were these top German troops so decisively defeated. The Highlanders charged the defenders of the house as the tanks turned away, with such stabbing, shooting ferocity that it was all over in a matter of minutes. The house was packed with Germans. Many were killed; a few escaped to come under the fire of Charlie Company as they tried to escape across the gully; but a good bag of paratroopers threw up their hands and surrendered in time to remain alive.

The gallant fight of the Edmontons and Seaforths in Ortona had concluded the night before. It had been a hard and dramatic struggle, and it ended in deadlock. The enemy was never driven out; he still held more than one-quarter of Ortona, when the German commander saw on the 26th that his reserves were all committed, and he knew it was time to quit. He also must have seen that he was seriously threatened by the strong 48th position at his back – one that not only refused to be dislodged but which had inflicted an overwhelming defeat on the Germans sent to contain it.

Worse, as that tomb-like silence had fallen over Cemetery Hill to mark the 48th Highlanders’ complete and single-handed victory (from an infantry sense), their position must have indicated to the enemy that his supply and escape route could be cut with a single bound. This was why the Regiment’s sneak penetation and spectacular fight were important factors to win Ortona for the Canadians.