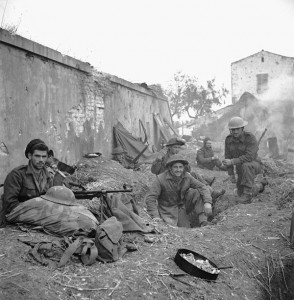 The decision to give 1st Canadian Division 48 hours of rest before launching a new attempt to secure the “Cider” crossroads allowed the enemy to replace its worn out units with fresh paratroop battalions. There was, however, no choice. Both 2nd and 3rd brigades were in no condition to continue offensive operations.  Even after 48 hours only 1st Brigade with the 48th Highlanders in the lead was fit to mount a major attack.

The problem of battle exhaustion, men who could no longer stand the strain of constant exposure to enemy fire and the elements and were evacuated to rear areas, was becoming critical. One in three non-fatal casualties was due to battle exhaustion and the prognosis for returning most of these men to combat was poor.

What was the purpose of Operation “Semblance” 8th Army’s mid-December offensive? Montgomery’s original plan had been to reach Pescara and the east-west road to Rome known as the Via Valeria. It was just 30km north of the Sangro River and on a large scale map it seemed like a simple operation. On 16 December, 5th British and 2nd New Zealand Division‘s  were still held up south of Orsogna. 8th Indian Division had reached the Ortona road but the only way forward was over mountain trails. There was no prospect of reaching Pescara.

The battle was now a struggle to capture and control Ortona. If the small city with its useful port could be taken without inflicting too much damage it would provide accommodation and an advanced supply base for whatever came next.