The advance that began on the banks of the Moro River on 4 December was to continue until Point 59 north of Ortona was in Canadian hands. 8th Army’s offensive was over and Pescara and the road to Rome were still securely held by the enemy. Orsogna remained in enemy hands. Ortona was a ruined city. 5th U.S. Army was equally unsuccessful in terms of reaching beyond Cassino to Rome.

The two offensives could be justified in strategic terms as high-quality German formations, including 1st Paratroop Division, were worn down by the struggle and required thousands of replacements. If the purpose of the entire Italian campaign was to divert enemy resources away from the eastern front and Normandy then 8th Army’s offensive was a success. The cost, however, was high. During December the New Zealand Division reported 1200 casualties, 8th Indian Division 3400, and 1st Canadian Division 2339.

View scenes from the Canadian experience after 27 December (through Library and Archives Canada): 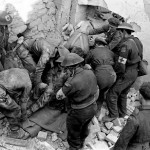 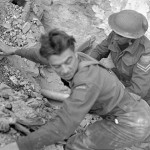 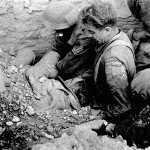 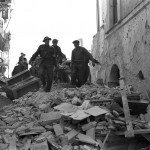 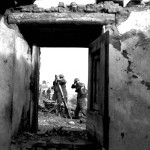 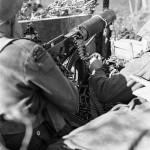 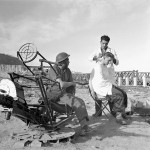 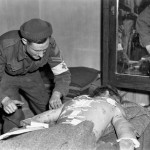 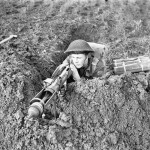 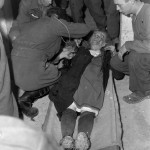 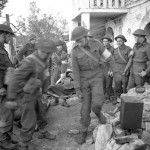 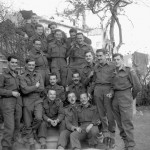 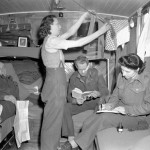 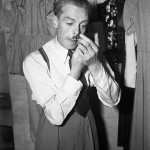 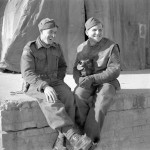 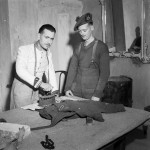 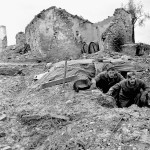 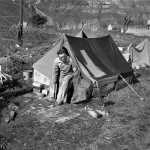 “The D-Day Dogers” is used to describe the Allied servicemen who fought in Italy during the Second World War. The term inspired many variations of a wartime soldier’s song set to the tune of “Lili Marleen.” Though there are some variations, the Canadian version goes something like this:

We landed at Pachino, a holiday with pay
Jerry brought a band out, to cheer us on our way
Showed us the sights, and gave us tea
We all sang songs, the beer was free
We are the D-Day Dodgers, way out in Italy.

The Moro and Ortona were taken in our stride.
We didn’t have to fight there. We just went for the ride.
Anzio and Sangro were all forlorn.
We did not do a thing from dusk to dawn.
For we are the D-Day Dodgers, over here in Italy.

On our way to Florence we had a lovely time.
We ran a bus to Rimini right through the Gothic Line.
On to Bologna we did go.
Then we went bathing in the Po.
For we are the D-Day Dodgers, over here in Italy.

Once we had a blue light that we were going home
Back to dear old Blighty, never more to roam.
Then somebody said in France you’ll fight.
We said never mind, we’ll just sit tight,
The windy D-Day Dodgers, out in Sunny Italy.

Now Lady Astor, get a load of this.
Don’t stand up on a platform and talk a load of piss.
You’re the nation’s sweetheart, the nation’s pride
We think your mouth’s too bloody wide.
We are the D-Day Dodgers, in Sunny Italy.

When you look ’round the mountains, through the mud and rain
You’ll find the scattered crosses, some which bear no name.
Heartbreak, and toil and suffering gone
The boys beneath them slumber on
They were the D-Day Dodgers, who’ll stay in Italy.

So listen all you people, over land and foam
Even though we’ve parted, our hearts are close to home.
When we return we hope you’ll say
“You did your little bit, though far away
All of the D-Day Dodgers, way out there in Italy.”

Click here to hear an alternate version of “The D-Day Dodgers.” 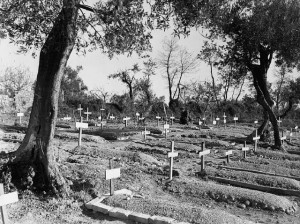 Graves of personnel of the Edmonton Regiment killed in battle of Ortona. LAC 3194458.