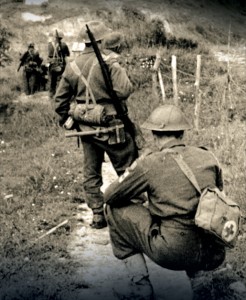 Men of the Seaforth Highlanders moving towards Ortona (LAC PA152749)

The battle for San Leonardo continued all day drawing in all of the Seaforths. The Calgary Regiment lost 27 of its 51 tanks. Over 300 fighter and 35 light bomber sorties were flown in support of the attack. After bombing, the Kittyhawks straffed enemy movement. The German attempts to dislodge the RCR’s failed as Canadian artillery provided a storm of defensive fire. An unarmed artillery observation plane directing the gunners was attacked by an ME109 but dove to tree-top level, causing the German pilot to slam into a hill.

The Canadians and 8th Indian Division were now across the Moro but the Germans had simply withdrawn a few hundred metres to positions on the reverse slope of what the Canadians called “the Gully” and a low ridge soon to be labelled “Vino Ridge” for the dense vineyards that grew there. These well-defended positions blocked access to the Ortona-Orsogna road – the divisional objective.