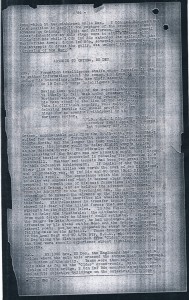 “Ortona, approachable only from the south-west, was admirably suited for defence. Through it passed the main coast road to the North, and the longer the town could be retained by the enemy, the longer would he delay Eighth Army’s arrival at the Pescara River. The offensive which had begun with the crossing of the Sangro was now almost a month old; German delaying tactics had succeeded in reducing its momentum to a standstill.  Weather and terrain had been two great factors in this defensive achievement. If denial of the Pescara River line to the Allies was worth the cost of two divisions, and it probably was, 65 Inf Div and 90 Gren (Mot) Div had been well spent. The importance which the enemy attached to delay was emphasized when it became clear that he was prepared to commit one of his best formations in Italy to the defence of Ortona, and so hold up the advance on Pescara.”