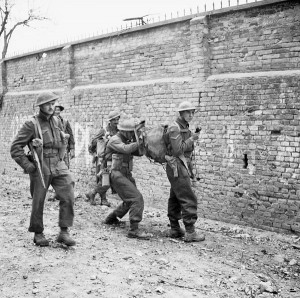 “Ortona was typical of the many towns along the Adriatic coast which in the Middle Ages were built on high promontories rather than on a narrow strip of beach. All of its former impregnability bad been retained with the deep gullies to the North and South. Its medieval castle was a reminder of the days when danger came from the seas rather than from the narrow strip of plateau to the South-west. In the town proper stone and brick buildings several storeys high were built one against the other; narrow straight streets divided the town into recognizable but irregular blocks. Ortona had been spared heavy bombing because the Royal Navy had planned to make use of the port facilities and long breakwater South-west of Ortona, the main axis of 5 Corps rejoined the coast road and continued due north through the town as Corso Vittoria Emmanuéle. This road, as street fighting began, became the axis.

With the road as inter-company boundary, the Loyal Edmonton Regiment renewed the attack at first light on 21 Dec. The entire day was spent in clearing the scattered buildings which lay immediately before the main built-up portion of the town. By nightfall, the first square, Piazza Vittoria, had been reached, and the Edmontons were in possession of Ortona’s highest building which dould be used as an observation post.

“C” Squadron 12th Canadian Armoured Regiment had been able to give much assistance to the Loyal Edmonton Regiment; up to the Piazza Vittoria, the wide street and scattered buildings enabled the tanks to give good covering fire against snipers and machine-guns which were usually located in second and third storey windows. Often armour had been held up while Engineers swept the road – a hazardous task in the continual sniping. By the time it was necessary to withdraw to harbour for the night, the tanks had destroyed two of the anti-tank guns which were as important to the enemy defence as the barricades they guarded.”