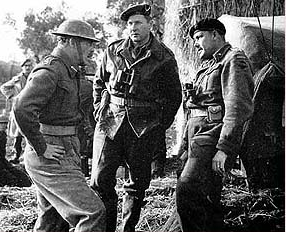 The situation confronting the Allied armies on the morning of 7 December was uncertain. The bridges over the River Sangro, which had been washed away when warm weather caused a major snow melt, had been rebuilt but heavy rains were again raising river levels and limiting air support which had played an important role in the victory at the Sangro.

On 5th U.S. Army’s front, the attempt to cross the Garigliano River and advance to Monte Cassino is going badly as the enemy is determined to defend this section of his “winter time” after the loss of the Sangro River position.

Prisoners of War reveal that 90th Panzer Grenadier Division facing the Canadians had been reinforced by men with an Edelwiess cap badge, indicating the presence of Mountain Division troops in the German order of battle.

“… the enemy will fight his forces with determination until it is clear we have succeeded in seizing a bridgehead which allows the full development of all our arms and have supply routes which wipe out the river as a tactical feature. When he judges that point has been reached he will begin withdrawal to a new line. It appears the enemy does not think that point has been reached.”