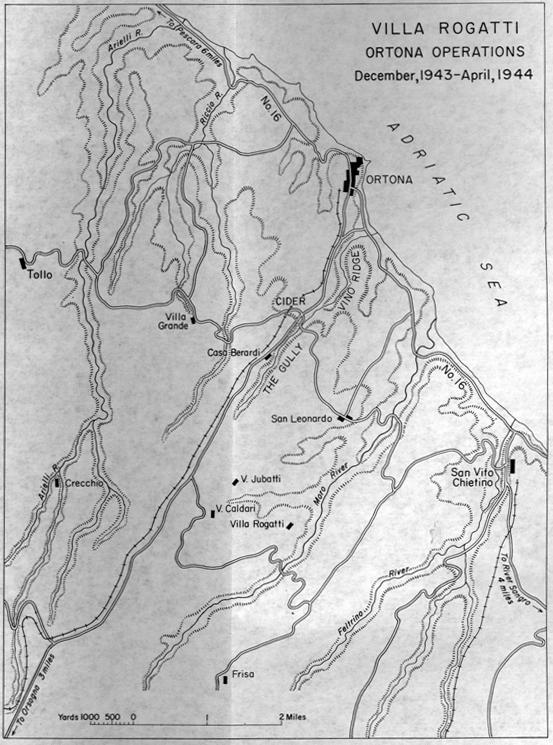 At 0100 hours enemy infantry supported by heavy mortar fire and self-propelled assault guns attacked the bridgehead.  HPER companies withdrew, drawing the enemy into a killing ground. The panzer grenadiers retreated in “panic-stricken groups.” B Coy HPER followed, capturing a house at the road junction seizing prisoners from 1 Para Div: the first sign that this elite formation was in action. Charles Comfort described the scene from his vantage point south of the Moro River:

“The night was starkly clear, moonlit and mild; the shelling as devastating as ever. The first long shoot lasted until midnight. The targets were the same: the supply road and the bailey bridge, the mediums in the valley and the field batteries, both behind the town and between us and the Moro. A tumultuous night, ghostly and unreal, under the spectral light descending from that lidless gorgon eye, staring unmoved from the sky; a cruel laughing witness, detached, existing in cosmic silence, out of the reach of lead and steel glaring down on this shattered landscape.

Toward five in the morning the bombardment eased up a bit and those who could relax slept. The dawn was chilly and there was a heavy dew as the sun shot up into a cloudless sky. The morning and early afternoon were crowded with air action. Four Focke-Wulfs appeared early, flying at an immense height, with long vapour trails streaming behind like bridal veils, and surrounded with the deadly confetti of ack-ack. No doubt they were gathering information on our lines of communication.

Far more exciting were the flights of Kittyhawks and Mitchells that were strafing the German positions across the Moro. They sailed in formations of six, peeled off, dived, machine gunned, bombed, swooped up and were gone. Surrounded by black ack-ack, it seemed miraculous that they were not hit. They were, of course, from time to time, but I never witnessed it.

There was only one topic at brigade this morning, the barrage and attack this afternoon. Zero was notified at 1530 hours, 1st Brigade leading off, the 48th Highlanders crossing the Moro and attacking San Leonardo from the west, the Royal Canadian Regiment from the east, through the bridge-head now held by the Hastings and Prince Edward Regiment. Tension grew as zero approached. 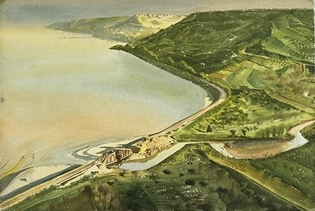 The valley below was typical of the water courses that channel this coastal plain, two hundred feet perhaps to its floor, a thousand yards across. At the bottom, a muddy stream, high at this season, meandered through shrubs and vetches and occasional clumps of willow. The concrete span that had carried the road had been demolished. In front could be seen two Sherman tanks, harboured behind the willows. The reverse slope, with its burden of olive, rose in gentle folds to its crest, the highway snaking up towards San Leonardo. The lain beyond undulated off to the horizon with its plotted fertility and cube-like white farm buildings. Ortona gleamed attractively in the distance, clustered about the cupola of San Tomasso.

Then inferno broke loose; the earth trembled with cataclysmic shock. Instantly the pastoral valley became a valley of death…”