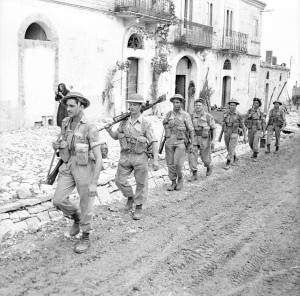 The plan in detail was to make use of the coast road bridgehead of the Hast & P.E.R. from which the R.C.R. were to attack laterally from the coast to the main axis, while at the same time the 48 Highrs secured, by frontal assault, the high ground between S. Leonardo and La Torre. S. Leonardo was to be the final objective of the R.C.R’s lateral attack; when the town had been captured, the Hast & P.E.R were to withdraw from the coast road area to positions on the right flank of the R.C.R, thus completing a firm bridgehead across the main axis. From this bridgehead a strong tank and infantry force was to strike at the junction of the main axis and the Otrona-Orsogna lateral road. Four field and two medium regiments were, from zero minus 60 to zero, to “search” the far bank from the coast to the main axis; from zero hours they were on call to fire opportunity targets, concentrations, and counter-battery. Thirteen squadrons of Kittyhawk bombers were to support under “Rover” control. 4.2 mortars were to fire from zero minus 30 to zero plus 30. 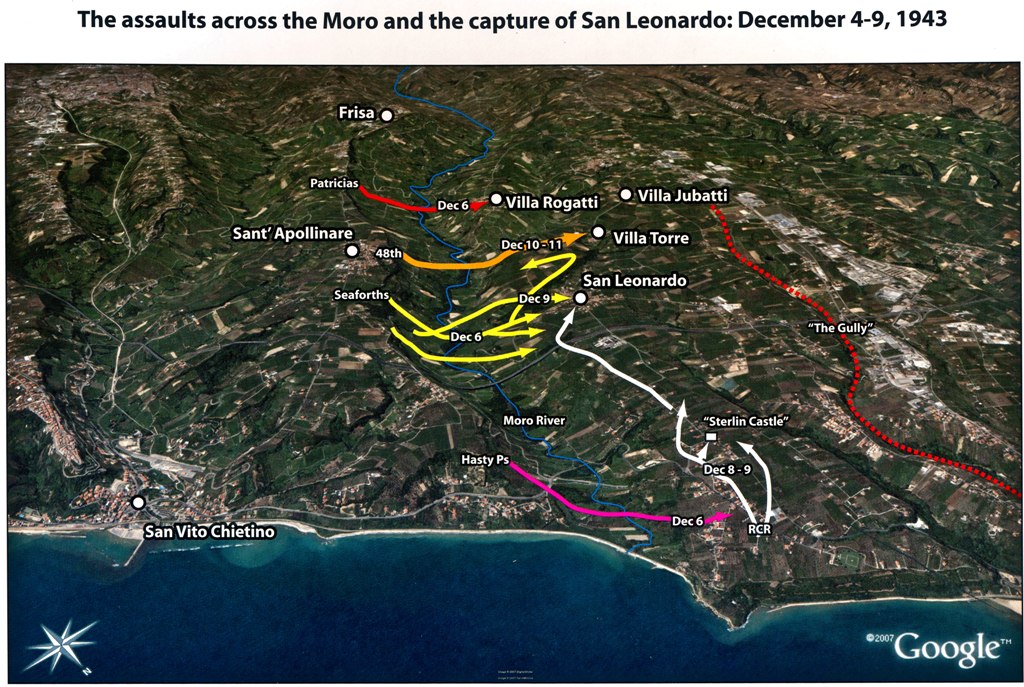 Evicting the enemy from the S. Leonardo escarpments would mark the successful completion of the first phase of this assault; much, therefore, depended on the lateral attack of the R.C.R. The ground over which the Battalion was to attack lay between the Moro and the narrow road which runs from S. Leonardo to the coast road; the area to be covered during the advance was about 2,500 yards long and 600 yards wide; several deep re-entrance cut from the river into the plateau. A gully in the area held by Hast & P.E.R was to be the forming up place; the start line approximated to the coast road on the left of the Hastings’ positions. Six tactical bounds from the start line to the objective were selected and allotted code-names:

“Halifax”
The high ground cover which ran the lateral road, midway between the start line  and objectives.

“Toronto”
Between “Halifax” and the river

“London”
The area between a gullyhead and the lateral road, about 500 yards from S. Leonardo

“St. John”
On the main axis, equidistant with “London” from S. Leonardo

“Nova Scotia”
The northern most portion of S. Leonardo

Every support, with the exception of armour, was to be given to the R.C.R Battalion. To strike laterally across the front of 361 Gren Regt was a hazard; whether it was a great or lesser hazard than other alternatives will not be known, but the plateau offered good tank runs for an armoured counter-attack, while the river barred assistance should one be met. Brig. Graham realized this, and in a note to Lt-Col Spry, timed 1125 hrs, 8 Dec, he said:

“… It is agreed that C.A (counter-attack) by tanks is probable and at dusk you will start man-handling 6 pdrs across to follow you up. (Hast & PER got two over last night). G.O.C emphasized necessity of thoroughly combing the bridgehead area so that no odd m.g posts are left to interfere with R.C.E (engineer) working parties. I wish to make it clear that this is your responsibility as I do not want the Hastings committed to anything more than a shift from their present position to the new positions. Code work ‘Brandy’ will be sent by you when your part of bridgehead is cleared and you are in position. Good Luck.”