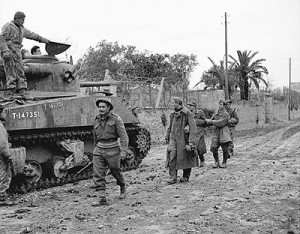 “It was almost dusk when the situation was such that the 48th Highlanders could pass through the Hastings’ positions. There was an air of gamble about the attack; no artillery preparation was made, and the hope of tanks getting through diminished steadily. The 48th Highlanders’ Commander requested that the attack be postponed until the morning, but the Brigade Commander considered that the enemy had received a blow and for that reason the momentum must be maintained.

Through the darkness and rain, the Highlanders struck out from the forward positions of the Hastings towards the high ground to the North-East of S. Nicola and S. Tommaso. The attack developed into infiltration on a battalion scale. The enemy, nineteen of whom became prisoners, appeared to be surprised; without opposition the Battalion gained its objective east of the Ricoic opposite S. Nicola and S. Tommaso. Heavy rain, zero visibility and the absence of artillery has made the gamble a profitable one. As soon as the objective was gained, a patrol was sent back to make contact with the Hast & P.E.R., and if possible, to bring up support. Whilst initially taken by surprise, the enemy were quick to discover the gap between the two Battalions, and the patrol moving back found the route blocked. The 48th Highlanders were cut off.” 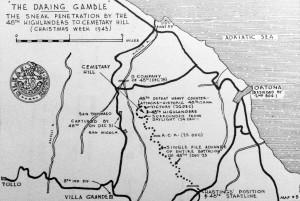