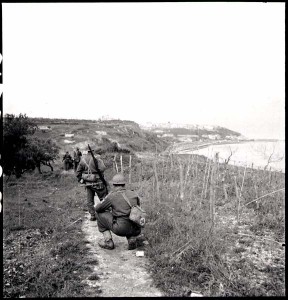 Company "B" of the Seaforth Highlanders moving along a mined coastal path December 21st, 1943; Ortona can be seen in the distance. - WWII.ca

The Loyal Edmontons entered the operation well below strength. Reinforcing drafts were on their way forward but it is perhaps fortunate that most of them did not arrive until the battle was virtually over. Ortona was no place for new hands or for men who did not know each other. With a strength of only 60 per company, groups of four to six men, rifle or Bren gun in hand, bomb ready to be snatched from the belt, worked their way forward. Close behind them came the six-pounders, venomous little cannon that could punch holes in stone walls with their armour-piercing shells. They were particularly useful for knocking snipers off the rooftops. The pioneers followed up, sniffing out the mines; behind them, the tanks kept pace, their guns ready to smash at buildings or barricades. Still further back, the mortar and medium machine-gun teams awaited the call to come forward and deal with indicated targets. Nearly a mile away seventeen-pounders firing over open sights stood at the ready to blast buildings along the seafront or to engage any enemies who menaced the Loyal Edmonton’s open right flank.

Read an excerpt from the Loyal Edmonton Regiment War Diary for December 20, 1943:

“The regiment, supported by ‘C’ Squadron, The Three Rivers Tank Regt, advanced under a barrage on a two Coy, two Troop front at 1200 hrs today. The start line was astride the Ortona road 100 yards forward of the crossroads at MR 322142. After very heavy fighting the regiment reorganized as follows: ‘B’ Coy the general area MR 333164, where liaison was established with ‘C’ Coy of the Seaforth H of C who had fought their way up the coast road; ‘D’ Coy to the northwest of ‘B’ Coy astride the main road; ‘C’ Coy at MR 328158; ‘A’ Coy and Bn Hq at MR 332160. Seventeen prisoners, identified as II Bn 4 Regt 1 Para Div, have been taken during this advance. Very active patrolling continues while the regiment consolidates its gains for the night. ‘C’ Coy is particularly active on the open left flank. Enemy arty continually harass us and our own arty and MMGs reply. Under cover of darkness the Sask L.I. MMG Pl, under command, move up and dig in in the ‘C’ Coy area. The 6 Pdrs of one troop of the 90th A/Tk Battery also move into position.”