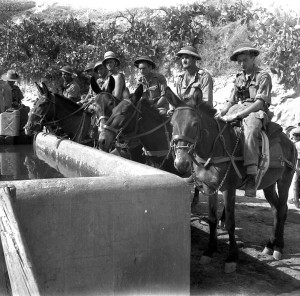 Throughout the night of December 8-9 the Royal Canadian Regiment maintained its position on the feature which came to be known regimentally as “Slaughterhouse Hill.” The fighting was most confused, the enemy appearing on several sides of the perimeter as well as within it. The sound of armoured vehicles moving gave the impression that a counter-attack would come in at dawn, and the incessant shellfire from both sides turned the night into pandemonium. Although no counter-attack developed on the morning of the 9th the battalion was still in an unenviable position. Weakened by “D” Company’s non-existence as a tactical sub-unit, hungry and tired, and subjected to the shellfire of both sides the battalion waited for further orders. During the morning a number of casualties occurred. Lieut. Bindmand, whose gallantry had been so outstanding on at least two occasions, being among those killed. To add to the chaos one of the Sikh muleteers with the Artillery F.O.O. was killed, and this threw his companions into such a melancholy frame of mind that even one look at them had a dishearteneing effect on the white troops. Nor did the presence of several dying mules cause the morning to be any more enjoyable.