Operations During Past Week:

Unsuitable weather conditions have seriously hindered all operations on 5 Corps front by making cross-country movement of tanks almost impossible. Operations planned have either been postponed or cancelled. 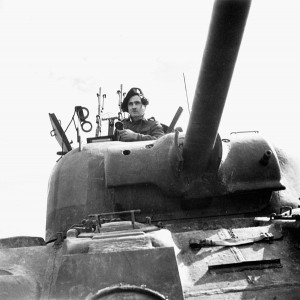 Morale:
In spite of mud and disagreeable weather the spirit of the troops is high. The visit during the week of Col. Ralston, accompanied by Lieut-Gen Crerar was greatly appreciated by all the troops.

Courts Martial:
Three courts martial were held during the week. Personnel being sentenced to more than 14 days and less than 90 days F.P. or detention are serving the sentence at 25 Fd Punishment Camp, Lucera.

Emergency Rations:
Present shortage of emergency chocolate rations in the fmn is 560, but an effort is being made to eliminate this shortage. Difficulty is being experienced in this regard owing to the AFHQ control of such commodities.

Rations:
First allotment of dehydrated mutton was made to the bde (2 ⅔ ozs per man). Frozen pork will be available during the coming week. Both of these items will overcome present monotony of diet of M & V ration and preserved meat.
Rum: No allotments available.

Ordnance Services:
During this month the fmn was equipped with sufficient canvas to put all ranks under cover and to provide a reasonable surplus of larger tents for use as offices, cook houses, messes and for amenities. Blankets to the scale of four per man and ten percent reserve for each unit were also obtained. These were mostly of American manufacture and were of excellent quality. All units were completed to full scale in all items of winter clothing and given a reasonable reserve to hold in unit stores.

During the past month a large release of compasses and binoculars was made to the fmn bringing the holdings of both items up to approximately 90% of W.E. Pistols Revolver, TSMGs and watches continue to be in very short supply.

Because of our experience with the Sherman V tk the formations has been asked during the past week by HQ Eighth Army for its views as regards tk mileages at which top overhauls will be required. Our experience to date based on a recently completed 1000 mile inspection of all tks in one regt indicates that the Sherman V powered with a Chrysler M4A4 engine is, apart from minor defects, mechanically sound.