Broken in Battle: A Look at Battle Exhaustion and Combat Stress by Terry Copp

The toll of casualties in the battles for Verrières Ridge included hundreds of men evacuated for “Battle Exhaustion,” the term applied to those who broke down on the battlefield. The stress produced by the strain and violence of combat effects every soldier. Most learn to cope or even adapt, some become stronger and tougher, but others develop immediate or delayed reactions that can be psychologically disabling. Historically these have been labeled Shell Shock, Combat Fatigue, Battle Exhaustion, Combat Stress Reaction, Post-Traumatic Stress Disorder (PTSD) and most recently Operational Stress Injury. Psychological problems related to experiences in war and other stressful situations are universal but doctors, patients, governments and the military are constantly changing their ideas about causation, prevention and treatment.

During the Second World War the Canadian army initially refused to employ so-called intelligence tests or other methods of personnel selection, preferring to leave it to medical officers to cull “obvious misfits” defined as those “with a history of nervous breakdown, residence in a mental institution, drug addiction, etc.” No. 1 Neurological Hospital, a specialized hospital combining neurosurgery with neuropsychiatry was formed and established at Basingstoke in southern England during September 1940. 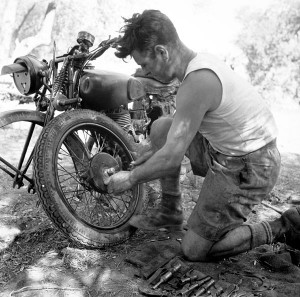 The neurosurgeons found steady work because the army allowed large numbers of young Canadians to ride motorcycles on the “wrong side of narrow English roads.” The resulting mayhem led German propaganda broadcasts to suggest that every Canadian soldier be given a motorcycle.

Gradually patients with nervous disorders flooded the hospital which soldiers began to call “No. 1 Nuts.” The neuropsychiatrists at Basingstoke paid close attention to each patient trying to decide on the best method of treatment. One particularly difficult case, a Major from the Seaforth Highlanders, responded well to a frank discussion of his problems but after several months back in his unit he was forced to return to hospital. Normally this would mean an immediate discharge and return to Canada but something about this young, intelligent officer led the psychiatrists to offer him another chance. The Major, Bert Hoffmeister, returned to the Seaforths, and commanded them in action until he was promoted to Brigadier, and then Major-General, commanding the 5th Armoured Division.

The Hoffmeister case and other similar examples helped Canadian doctors to avoid rigid ideas about the range of neurotic disorders they treated at Basingstoke and the Army’s senior psychiatrists Colonel Van Nostrand and Lieutenant-Colonel Richardson advocated a pragmatic treatment system for use in combat. 3rd Canadian Division, training with I British Corps for D-Day had its own psychiatrist, a dynamic young New Brunswick doctor, Major Bob Gregory, who won the confidence of both medical and military commanders. When large numbers of cases of combat stress occurred during the fighting for Carpiquet and Caen, Gregory and the Casualty Clearing Stations (CCS) were well-prepared to provide treatment based on the principles of proximity (to the battlefield), immediacy and expectation (of relief of symptoms and return to unit). When it became apparent that many patients could not be returned to combat, jobs were found in the rear areas. 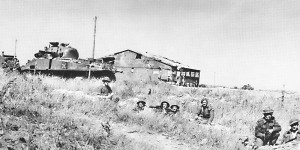 The situation was very different in II Canadian Corps where medical and military officers rejected the advice of psychiatrists who insisted that exhaustion casualties would not be a significant problem. They were committed to following the British model, relying on a corps exhaustion unit with an establishment of two psychiatrists and eight other ranks. No. 1 Canadian Exhaustion Unit was to be attached to whichever Field Dressing Station (FDS) had room for them.

The unit was commanded by an exceptionally able physician, Major Burdett McNeel, who tried to educate rather than challenge his fellow doctors. No one, including McNeel, anticipated the scale of the challenge they would confront. During the six-day period before 2nd Division began its first battle, 160 cases of acute stress reactions, with tremors, weeping, startle reactions and withdrawal as the main symptoms, arrived at McNeel’s unit. Treatment plans which included immediate sedation for 24 hours, followed by two days of rest and “psychotherapeutic talks” soon had to abandoned as numbers grew and supplies of sodium amytal, the sedatives ran out.

McNeel’s war diary entry for 18 July notes that “We were awakened by a terrific roar of gunfire… rumour is that ‘This is it’ and that the show should soon be over….” So much for rumours, Operation Atlantic, the Canadian part of Operation Goodwood, cost 2nd Division 249 fatal casualties and 900 men with physical wounds. More than 300 battle exhaustion cases were evacuated to the Exhaustion Unit. The diary entry for 22 July reads: “One hundred and one cases of exhaustion were admitted… our ward and the “morgues” are filled. Those in the morgues have had to sleep on blankets spread on the ground. The rain has been pouring down and the majority of men are wet and muddy.” Fortunately, 2000 capsules of sodium amytal arrived and full sedation was possible.

As McNeel and his small staff tried to cope, Brigadier Farmer, the Corps senior medical officer, who had opposed all preparations for psychiatric casualties, arrived at the Exhaustion Unit to apologize and find out what was needed. He warned McNeel that a new and potentially difficult night operation was planned for 25 July with the codename Operation Spring. “The Unit” Farmer warned, “should expect another increase in admissions.”

On 25 July, one of the blackest days in the history of the Canadian Army, a disaster of near-Dieppe proportions struck the 2nd Division. By nightfall 450 men were dead and more than 1000 wounded, missing, or taken prisoner. The Black Watch battalion had 121 killed, 119 wounded, and 82 taken prisoner. Battle exhaustion during and immediately after this trauma added several hundred more casualties to the toll. The division, after only twelve days in battle, had produced almost as many serious exhaustion cases as the 3rd Division had suffered in six weeks. The Canadian battle exhaustion problem was fairly typical of the overall Allied experience in Normandy. During July 1944, the average for the Allied armies was certainly in excess of one exhaustion case in every four non-fatal casualties.

On the other side of the battlefield, the German Army was attempting to cope with its own exhaustion crisis by tightening the disciplinary screws. German military psychiatrists had long insisted that stress breakdowns were a leadership problem and not a medical one. In the early years of the war, with the Germans everywhere victorious, such casualties were few. It was satisfying to attribute this to the army’s emphasis on group cohesion and the responsibility of junior officers and especially NCO’s for the welfare of their men. But even in the days of triumph, the new Nazi-inspired code of military law was dealing out death sentences and long terms of penal servitude for disciplinary infractions, profoundly influencing military behaviour.

By 31 March 1943 more than 1500 death sentences had been carried out in the German army, most of them for the crimes of desertion and “subverting the will of the people to fight.” (Only 48 German soldiers were executed in the First World War). By mid-1944 107,000 German soldiers had been tried for absence without leave, 49,000 for disobedience, and 46,000 for contraventions against guard duty. The most serious crimes of desertion and subversion had led to between 13,000 and 15,000 cases each. More than 7000 German soldiers had been executed for these crimes by June 1944.

Battle exhaustion became a significant problem after the German army was forced on to the defensive. Some psychiatrists tried to intervene, urging recognition of the nature of stress reactions in battle. A script for a film about treating such casualties was completed and a statement advocating early forward treatment issued. No doubt many German army units were already using short rest periods and “comradely comfort” for stress casualties. The alternative was to allow soldiers to be caught up in a legal system that was “underpinned by compliance with Nazi war aims and ideology.” With new crimes added almost monthly in 1944-45, “death sentences rained down faster and faster each year.” 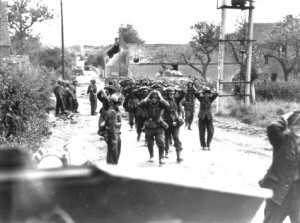 The Allied armies took more than 200,000 prisoners of war in Normandy. Many of them had surrendered in a condition suggesting complete physical exhaustion and serious nervous fatigue. McNeel, who saw many such prisoners in late July and August 1944, was convinced that many German soldiers were battle exhaustion cases by the end of the battle of the Falaise Gap.

The Canadians, because of their relatively small numbers and their insistence on a completely Canadian medical system, were able to analyse medical events more closely. By the Fall of 1944, in both Italy and Northwest Europe, Canadian neuropsychiatrists had convinced themselves and the senior commanders that battle exhaustion was inevitable and reasonably predictable. Rapid treatment as far forward as possible was the best way of preserving manpower for the battle, but it did not always work. A high return to unit rate was probably worth pursuing in military terms but many individuals would break down again. No one was confident that the ones who did not turn up again at exhaustion centers were still effective with their units. Colonel Van Nostrand, the senior Canadian psychiatrist overseas, offered his view of the problem:

I am not convinced that psychiatry will ever solve the vast problem of the psychiatric breakdown of soldiers during war. It is my opinion that the methods now employed in the British, American, and Canadian armies will not materially lower the incidence of psychiatric casualties in a fighting force. There are various reasons for these opinions but two of them are fundamental. First, there is direct conflict between the needs of the service and the needs of the individual soldier as assessed by his physician. Secondly, the attitudes and behavior of the successful soldier are contrary to most of his previous teaching. He must not allow death or mutilation of his comrades to prevent him from reaching his objective, and finally, he must pretend that he is glad to risk to lose his life for that cause.

The basic conflicts will always exist in armies such as ours which are composed largely of civilians who become soldiers, either voluntarily or by compulsion for a short period. It is right that this should be so.

This is not a plea for sympathy for the inadequate soldier who is unable to stand the stresses of prolonged combat, nor is there any wish that discipline be relaxed or that any of the defections which fall under the heading of cowardice in the face of the enemy should be condoned. It is a plea for the adoption of realistic attitudes toward the reactions of normal men and women to the stresses of war.

We who formulate the medical policy should keep constantly before us certain premises which we believe to be true, but which we have ignored in practice –

Van Nostrand’s summary of the Allied experience with personnel selection and forward psychiatry in the Second World War offers a comprehensive statement of what was known by 1945. Unfortunately, the lessons were soon forgotten and had to be relearned.