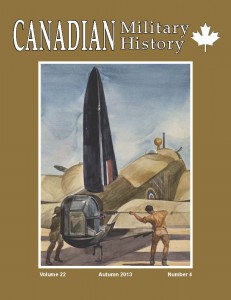 Training for Operation Jubilee: Tactics and Training in the Fusiliers Mont-Royal and the Dieppe Raid, 1939-1942

Abstract: The disastrous Dieppe Raid of August 1942 has received a great deal of attention from historians since the end of the Second World War. This article examines the training given to officers of infantry units of the 2nd Canadian Infantry Division using the Fusiliers Mont-Royal (FMR) as a case study. The article contends that the infantry officers were not ready, as their tactical training was impeded by the absence of a common doctrine, the lack of realism, and time constraints. FMR’s junior leadership therefore lacked speed, initiative, and instinct, all vital elements for an operation as risky as Operation Jubilee.

Abstract: In May 1943, René Morin, a young francophone from New Brunswick, was recruited under the National Resources Mobilisation Act. After serving in Canada for over a year, he went overseas in January 1945 and was killed in battle in April. By retracing his experience, we reveal the effects of the Second World War on an individual, on a francophone community outside of Quebec, and we explore the national tensions generated by the mobilization laws.

The Somalia Affair: The Oxford Companion to Canadian Military History

Abstract: Kenneth Frank Huntington (1921-2001) was a British-born Torontonian who answered the call of duty in the Second World War and served in the RCAF from 1941 to 1945. He was an aircraft maintenance technician, and from early 1943 until late 1945 was overseas servicing bombers in combat squadrons. The present account, by his grandson, draws on the diary he kept in 1943 (which includes his deployment to North Africa with No.424 Squadron, RCAF), correspondence with his wife, family and friends while he was overseas, and commentary he wrote later in life. His writings recorded not only his experiences, but reflections on military service, and the challenges of re-adjustment to civilian life after the war.

From Mars to Clio: A Personal Journey

Abstract: Bill McAndrew’s varied career saw him become a leader in both war and society studies and the practical application of those studies to military professionalism. After service as an officer in the Canadian Army, 1951-1963, that included duty in Korea, Germany, and Ghana, Bill, a high school dropout, studied at York University’s Glendon College (BA), and the University of British Columbia (PhD).  He taught Canadian and US history at the University of Maine Orono, 1969-1975, where he earned tenure.  Deciding to return to Canada, he accepted a position at the Directorate of History in Ottawa. He contributed to the official history of the RCAF, developed the battlefield studies programme for the Canadian Forces, and served as an historical advisor on leadership studies for the armed forces.