Canadian War Museum Presents: 6 Victoria Cross Winners on the 100th Anniversary of the Battle of Hill 70

The Canadian War Museum has opened a new display to mark the 100th Anniversary of the Battle of Hill 70, honouring 6 Victoria Cross recipients, including their portraits and medals. 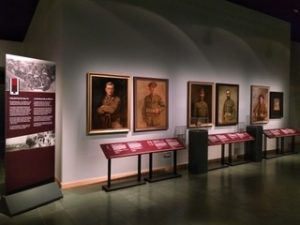 From the press release:

“Sir Arthur Currie described the Battle of Hill 70 in August 1917 as ‘altogether the hardest battle in which the Corps has participated,’” said Stephen Quick, Director General of the Canadian War Museum. “It’s remarkable that this 11-day battle, fought four months after Vimy Ridge, resulted in six Canadian soldiers of varying backgrounds and ranks being awarded the highest honour for military valour in the British Empire.”

The Canadian Corps, under the command of Sir Arthur Currie, launched an attack on the German-held city of Lens in northern France on August 15, 1917. His strategy was to capture the high ground overlooking the town, forcing the enemy to counterattack. This prevented German units from reinforcing formations facing Allied troops struggling to gain ground at Passchendaele in Flanders. By August 25, the Canadians had withstood 21 failed counterattacks and suffered 9,000 casualties at Hill 70, but they had killed, wounded or taken as prisoner about 12,000 Germans. It was a significant and costly tactical victory for the Allies.

The exhibition will be on display from August 15th to Remembrance Day, 2017.