Confronting the Holocaust in Poland by Erica Parnis

Confronting the Holocaust in Poland

This spring Laurier undergraduate students enjoyed a unique opportunity. Ten of us travelled in Poland for two weeks as part of a full-credit History course called “Into That Darkness: Poland, World War Two, and the Holocaust.” We were joined by ten students from Nipissing University in North Bay.

View of the entrance into Birkenau from inside the camp. Photo taken by Kyle Falcon.

Our group of twenty came from various academic backgrounds, from History to Music to Education. Some of us had previous experience studying the Holocaust, while others were only equipped with what they had learned in the two-week in-class sessions leading up to the travel component. Although our previous academic experiences varied, our group quickly learned that we all had similar reasons for being there. We wanted, naturally, to immerse ourselves in a travel opportunity that would enrich our university experience and would give us the chance to engage with other cultural perspectives. But we also wanted to look history in the face, to learn about the history of the Holocaust in a way that enabled us to go beyond names and dates in monographs and to see history on a more personal level. Last but not least, we were motivated by a desire simply to remember and commemorate a genocide in which nearly 6 million Jewish people died.

Our group was based in the cities of Krakòw, Lublin, and Warsaw, but we also visited a number of other towns in Poland, including Tarnòw, Zamość, Izbica, and Oświęcim (better known as Auschwitz). We visited former Nazi labour camps and death camps like Płaszòw, Auschwitz-Birkenau, Bełżec, and Majdanek; went to countless museums and historical sites; and listened to engaging lectures by museum curators, archivists and tour guides. We visited various organizations and met with several academics and community activists that are committed to the cause of Holocaust remembrance in Poland. The Grodzka Gate – NN Theatre Centre in Lublin, with its project to document the lives of the 43,000 Jews that called Lublin their home before the war, stands out in particular.

In the distance, a student walks through the Bełżec extermination camp memorial, where approximately 450,000 Jews were murdered between March and December 1942. Photo taken by Kyle Falcon.

There was also a volunteer component to our course. In Krakòw our group spent a day at the New Jewish Cemetery working on the cemetery grounds. We swept and cleaned the cemetery pathways, weeded around the tombstones, and collected dozens of bags of garbage and plant debris. This cemetery, like so many others in Poland, had been destroyed during the war, and parts of it remain in a poor state to this day. For many of us, this cemetery experience stands out as a highlight of our program; it was humbling to be in that beautiful, lonely and sad place and to actively engage with the past in a practical and useful way.

Students volunteering at the New Jewish Cemetery in Krakow. Images show grounds before, during and after cleaning (from left to right). Photo taken by Kyle Falcon.

I think all of us on the trip had expected that our days would be filled with solemn mourning, but what many of us did not expect was that we would encounter an immense amount of joy and hope in Poland as well. When we spoke to Holocaust survivors, their memories were not only of destruction; instead they recalled fond days before the war, and they shared memories of warm summers, of family, and of celebration. In a meeting with Professor Dariusz Stola, the Director of Warsaw’s newly opened POLIN Museum of the History of Polish Jews, he said something that resonated strongly with so many of us: “Memory should not be hostile to life.” This was, as a group, what we took to heart the most. It is not enough simply to mourn Jewish death and suffering in the years of the Holocaust – it is also important to remember and celebrate the hundreds of years of Jewish culture that existed in Poland before 1939 as well as to recognize the Jewish rebirth that has started across Poland in recent years. I believe that, during our time in Poland, we were able to find a balance between mourning and celebration and, by negotiating these methods of remembering, we were able to engage with fundamental questions of historical memory. 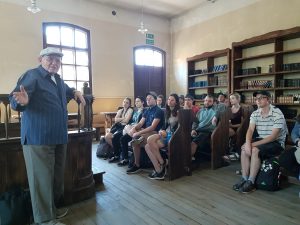 Holocaust survivor Pinchas Gutter speaks with the students at the Auschwtiz Jewish Centre in Oświęcim. Photo taken by Kyle Falcon.

We contemplated these and other questions during the formal parts of our days, and we continued thinking about them during our free time as well. At the end of each day, we would talk over dinner about issues of history, memory, and identity. For many of us, discussing our thoughts and experiences with fellow students – our new friends – was one of the best parts of the trip. This kind of collaborative learning was something none of us had experienced before in university; it simply cannot be achieved in a classroom setting.

I can speak on behalf of our entire group when I say that our experiences in Poland will stay with us forever. Regardless of everyone’s personal reasons for taking part in the trip, we were all able to walk away with a deeper understanding not only of the Holocaust, but of what being a student of history truly means.

We would like to thank the Centre for Military Strategic and Disarmament Studies and its donors for the generous funding that facilitated Laurier students’ participation in the program. We are also grateful to the Faculty of Arts at Laurier and the Department of History for supporting opportunities like this one. Lastly, we would like to thank Dr. Eva Plach for her tireless commitment in planning this course, without which it would not have been possible, and Dr Hilary Earl of Nipissing University for, similarly, introducing us to a different kind of learning experience. Thanks, too, to Kyle Falcon, a Laurier doctoral student in the Department of History, who was a terrific assistant on the course. 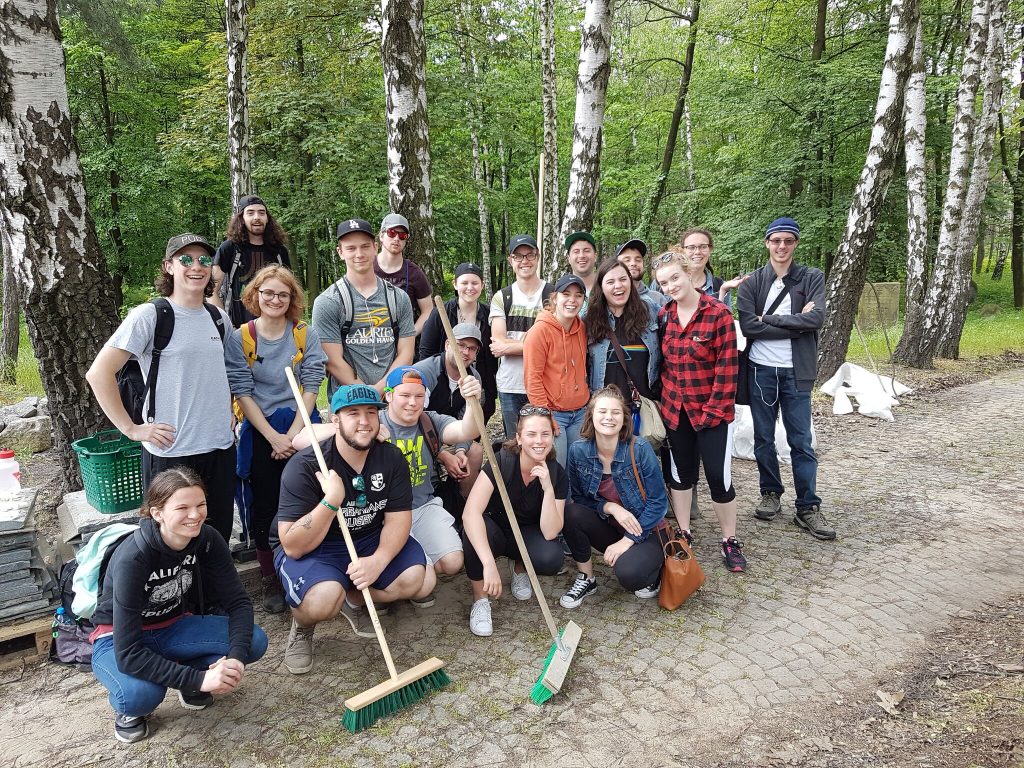 By Erica Parnis (Honours History and English, 2017), in collaboration with the following Laurier and Nipissing students: