“How did we defeat the German Army in Normandy?” by Terry Copp

I recently presented a paper at the Army Historical Workshop titled “Operational Research and First Canadian Army” which sketched the close relationship between Canadian staff officers and the soldier–scientists of No. 2 Operational Research Section. My discussion of counter-mortar development and operational research on the accuracy or lack thereof of artillery and other questions led Dr. John Rickard to ask “So if artillery was inaccurate, air power marginal and our armoured vehicles vulnerable and under gunned how did we defeat the German army in Normandy?”

John, who is the author of important books on General George Patton (Patton At Bay: The Lorraine Campaign, 1944

, Advance and Destroy: Patton as Commander in the Bulge

) as well as a recent biography of Andrew McNaughton (Politics of Command: Lieutenant-General A.G.L. McNaughton and the Canadian Army, 1939-1943

), has his own ideas about what happened and was just being provocative, but his question prompted this blog.

When Montgomery introduced the Overlord Plan at the famous meeting at St. Paul’s School in April 1944 everyone believed they were embarking on a difficult and dangerous operation which would involve prolonged heavy fighting. The phase lines suggesting the Allies would reach the River Seine at D+90 and then need to pause before advancing further were one indication of what was expected. If anyone had suggested that the Allies could defeat two German armies in just 76 days and liberate France and Belgium by early September, people would have wondered what they were smoking.

The German side of the Normandy Invasion

The seemingly impossible victory was the product of Allied success and German failure at the strategic, operational, and tactical levels. There is not much controversy about strategy. The German generals as well as Hitler persuaded themselves, with some help from Allied deception schemes, that the main Allied attack would take place in the Pas de Calais and they held to the view until late July-early August, forcing a limited number of German infantry divisions to fight an attritional battle with diminishing resources. If the Germans had committed the bulk of 15th Army’s infantry to the Normandy front in early July, allowing the Panzer divisions to be withdrawn into reserve, the breakout from Normandy would have been delayed for months. This, together with the failure to provide replacements for the divisions committed to Normandy, was a strategic failure of monumental proportions. Hitler’s decision to defend Italy south of Rome cost him men and resources that could have made a significant difference in the vital Normandy theatre. 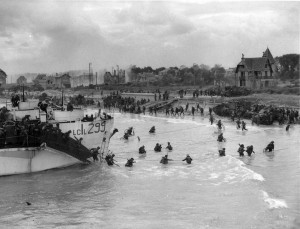 At the operational level the Allies devised an approach to battle that minimized their weaknesses and maximized their strengths. The standard set-piece attack called for advances on a limited frontage strongly supported by all available artillery. As Guy Simonds noted, “the essence of the German system of defence is the counterattack” and “as long as fresh reserves are available the Germans will counter-attack heavily and continuously… the success of the offensive battle hinges on the defeat of the German counter-attack.”

At the tactical level the German doctrinal commitment to the immediate counterattack by whatever forces were available allowed the Allies to plan brigade and battalion level actions in the sure and certain knowledge that the enemy would come at them as soon as possible. With Forward Observation officers (FOOs) linked to regimental, divisional, and corps artillery assets enough observed fire could be directed at enemy attackers to inflict significant casualties. Mortars, machine guns and rifle company weapons dealt with the survivors. This doctrine was highly effective in the defence of the bridgehead and in Operations Epsom, Martlett, Windsor, and Charnwood. Unfortunately,Montgomerywas persuaded to abandon “bite and hold” for breakthrough plans such as “Goodwood.”

Fortunately by late July the “growing shortages of men, weapons, and ammunition” occasioned by heavy casualties in counterattacks created a crisis that the German generals could not cope with. Losses of close to 20,000 in the week before Operation Cobra provide much of the explanation for the breakthrough that followed.

Normandy provided lessons for the Allies who introduced or refined new weapons – the flame-throwing Wasps and Crocodiles, Counter-Mortar radar, the Land Mattress rocket launchers and air observation flights. The real challenges were logistics and manpower. Montgomery’s army group actually got smaller after Normandy when 59th and then 50th Division were cannibalized for reinforcements. The Canadians made due with fewer riflemen in most battalions. The Americans were so short of men that the racial barriers that kept the Afro-Americans out of white combat units broke down. Until the approaches toAntwerpwere cleared, the Allies lacked the capacity to complete the defeat of the German army in the west.