When fighting to create a space for student voices in the classroom I am confronted by peers who suggest to me that the students I work with are too young to think independently or critically, or that the material and expectations I set are too complex. However, with proper guidance and activities relevant to their particular age group, students of any age can achieve great learning outcomes on any topic. The issue might be that we as educators underestimate the abilities of elementary students to think critically, or that we do not provide enough opportunities in the classroom to demonstrate critical thinking.

This past summer I participated in the Cleghorn Battlefield Study Tour for teachers. As an elementary teacher I wanted to explore the historical inquiry questions presented on the tour and figure out a way my grade 4 students could explore the same questions. In many ways I was advocating for my students to ensure the perspective of young voices would be heard on the same topics discussed among older students.

I learned a lot by being a part of the tour, and gained insight on how to guide debates and discussions and how to allow students to argue what they believe. One of the most important lessons I learned was to encourage students at any age to stand up for what they feel is right, based on the evidence, and to be receptive to the ideas of others. I am strong-minded, but by learning on the tour how to be open-minded and receptive to new perspectives I understood the value of creating dialogue. For example, before the tour, I was convinced that German soldiers were to blame for everything within the two world wars. I felt anger toward them. When I arrived at the German cemetery in Langemark, Belgium I walked amongst the gravestones and listened. The emotions that emerged were sorrow and shame for the men buried there. I began to see them as individual soldiers and not as stereotypical “aggressors”. They were sons, husbands, brothers or fathers; they sacrificed their lives fighting for their country, just as our soldiers did. I began to think and question: why aren’t we respecting them as such? Is it because we as young students were told by our teachers and our parents that it was their fault? Why couldn’t we read and research for ourselves and form our own opinions? Now, it is more widely accepted to allow students to generate opinions using evidence to support what they believe in, but we as teachers and parents still have a tendency to feed information to young students. If we don’t allow them at young ages to form opinions and teach them how to look for evidence and use it to support what they believe in, then much like my opinion on the German soldiers, their thinking is determined for them and therefore we, as teachers, are not teaching them to be open-minded at all.

My goal as a primary and junior teacher is to give students a head start on learning how to research, use evidence and have an open mind to what they believe is truth. After all, everyone’s perception of how an event unfolds is very different. Armed with this new approach I gave my students a basic scenario: John and Jane get into a fist-fight at recess. Sue comes inside and says to the teacher: “John and Jane had a fight at recess. It was so scary because John got a bloody nose and there was blood all over the pavement. Jane was so angry at him because he wouldn’t let her play.” Shawn comes inside and says to the teacher; “John and Jane had a fight at recess. It was no big deal. John had a little bloody nose but he was able to stop the bleeding pretty quickly. Jane was just upset because she had to wait to join the game.” Then I get the students to tell me what the facts are. The facts: John and Jane had a fight over a game and John had a bloody nose. Then we get into perspective. Even though they saw the same fight, they interpreted and felt very different about it. Sue felt scared and thought it was very serious, as opposed to Shawn, who thought it was silly and no big deal. Then I ask the students how they might feel about the situation. Everyone realizes their thoughts and feelings are very different but the facts stay the same. We then discuss how that might occur in history texts and stories. Even though they have stories and accounts of soldiers that were there, perspectives on the same war vary. It all depends on whose story we are telling and whose voice is heard. It was very difficult for me as an adult to accept that, but hopefully as a teacher, I can help young students form their own opinions using evidence based on their feelings and their perspective. I can show them that it is acceptable to feel differently about an event than their friends, or even have a different opinion than their teacher.

This year, I have decided to challenge my grade four students to write soldier biographies. Each student was assigned a Canadian soldier who fought in the Great War or the Second World War. They received a digitized file on their soldier from the Lest We Forget Project and researched information about their soldier. Students were then given the opportunity to be creative and write in any form they choose about what they perceived was important and interesting information on their soldier. During the research process, I observed students interested in learning geography as they tried to understand where their soldier traveled, where they died, and where they fought. They felt empathy as they read letters of regret that were sent to the families of the fallen soldiers. They were asking questions and began to make personal connections to a complete stranger. 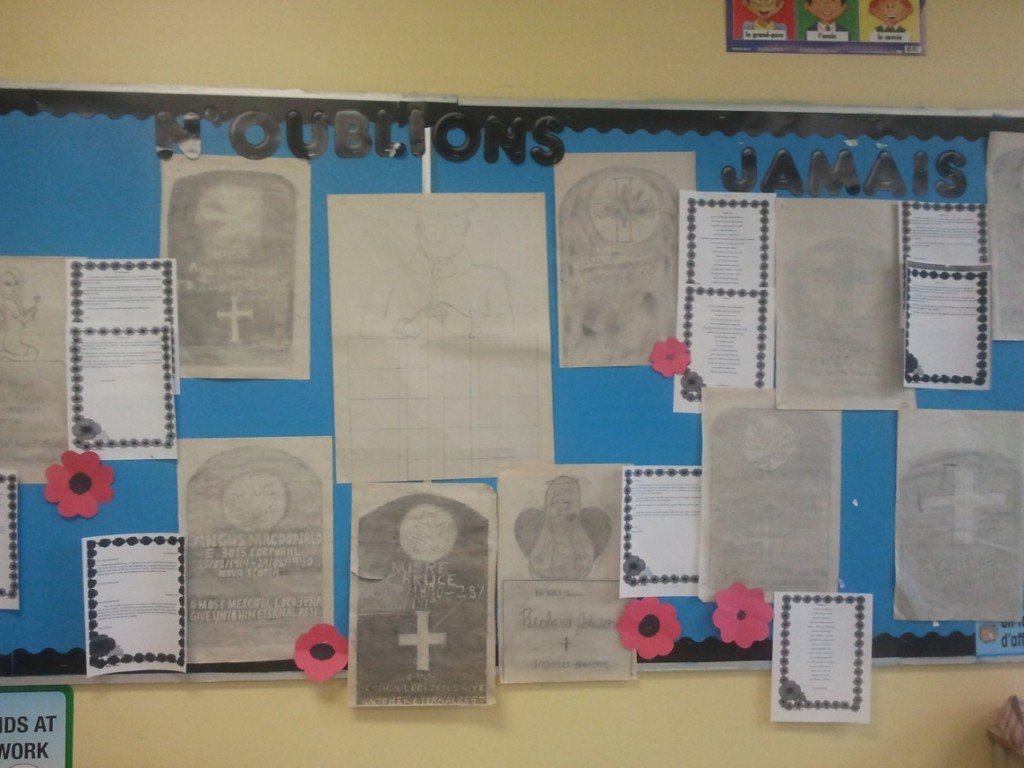 While some of the stronger students were able to take their information and create poems, letters and monologues, even the students who struggle to write had interesting facts and thoughts to verbalize in the process. Some of these young students, who began the process with uncertainty, as it seemed like another dull assignment that was irrelevant, started making connections and bringing their findings home to their family. They began discovering family members and ancestors who also fought in the war. One student even realized that the soldier they were studying could very well be a family member.

Once all of the students finished their research and biography, we typed out their work and put together a bilingual magazine of soldier biographies. (Yes, my grade four students wrote their biographies in both English and French.) Following the written component, we took a trip to the Smiths Falls Cenotaph where students shared their stories with our very own fallen men. It was a meaningful and emotional experience. 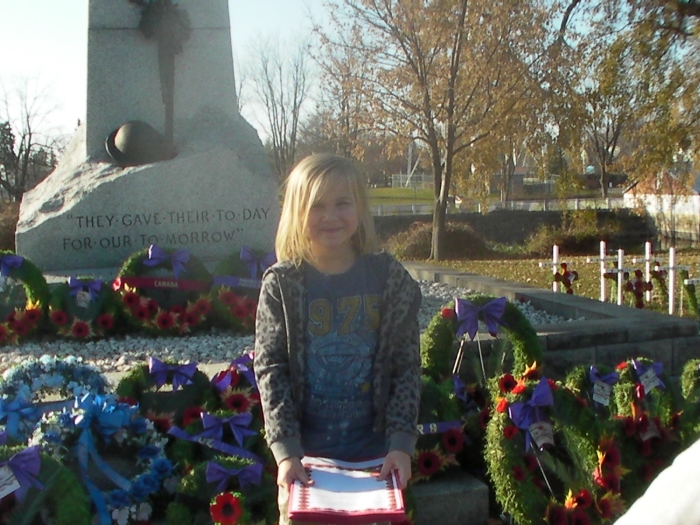 It is truly amazing how young minds think and what they are capable of doing if we allow them to have a voice. It is so important to understand a variety of perspectives. This is what we should be teaching students every day. As teachers, we need to guide students in forming their own opinions and perspectives on history’s events using evidence no matter what age group we are working with. We need to give young students the same opportunities as older students. They are capable of so much and they can teach us so much, so long as we create the conditions to allow them to have a voice in their learning.

Tanya Parent is a grade 4 teacher in Ontario