This is part two of a three part series. For part one, see Blake and Mason’s previous blog: Digital-Age History in the Classroom – Part I

After the launch of Windows 8 there were many reports of a general uneasiness in business, education and the home computer circles about the look and feel of Microsoft’s new operating system. Microsoft had not undertaken a major overhaul of Windows since the mid-1990s, but it has still been able to hold on to the lion’s share of the international OS market. What has most Microsoft users worried is that Windows 8 departs from traditional framework, instead moving towards a vision of something that has never been done before: a cross-platform, seamless connection between all technology devices a person can possibly have. As with any significant change to an OS user interface and functionality, this has users scared. The change in approach also presented a major challenge for my students and our smartphone app.

In the initial planning phase of the Juno Beach Project, ideas were bounced around relating to the main features that would be incorporated into the phone app. After long deliberation and careful debate we decided that we would develop the app for phones which run the Windows phone operating system. The one significant dilemma with this decision was that we knew Microsoft would be launching an entirely new system in the late Fall and that meant my students would either have to learn a new coding and operating system or continue to design and implement the cell phone app using Windows Phone 7 (WP7), the system Microsoft would be phasing out. This affected our project significantly because almost all lesson plans and code that had previously been created for the project became obsolete overnight when we made the decision to gear the entire project towards the Windows Phone 8 (WP8) and not WP7. Although some code was transferrable, it provided a large hurdle that needed to be overcome.

Prior to the release of Windows 8 (and the subsequent release of WP8), Microsoft kept its cards very close to their chest. They made a very bold decision to not release any of the details and new features that would be incorporated inside their new operating system until the very last minute, which went entirely against the industry standard. Only major companies were given access to the development tools prior to release, all of which are required to produce apps for phones, tablets and personal computers.

We were extremely fortunate to have the backing of our school board and the IT department which has been in continuous connection to the undertaking at hand. Without them the project would not have been able to get off the ground. The incredible support that they have provided us has allowed the students to realize that not only is success possible in this undertaking, but is becoming a reality. Each student was given a smartphone so that they could look at testing the different software they were developing. This allowed them to practice debugging in a real world setting and helped the students gain a greater understanding of design and interface standards from other apps already developed for the platform. Our lab was the first lab in our board – quite possibly in the province – to be furnished with Windows 8 and the state of the art software that is required in order to develop apps. There have been growing pains with all of the new bells and whistles provided to us, but simple requests for technical support have been met both quickly and efficiently.

As the students were focused on understanding the key differences between the Windows Phone model and the other giants in the market (namely Apple’s iOS, Google’s Android OS, and RIM’s Blackberry) they were also required to develop a standalone desktop application that would give students researching soldiers the ability to easily enter the data collected on each one of their soldiers. Everything from names and birthplaces to the most intricate details that contribute to the unique experience of each one of those that fought and died on Juno Beach was considered. The collaborative work between the Canadian history class and the computer class resulted in a detailed list of the soldiers from D-Day in a digital framework with nearly 150 fields of data on each soldier. As the database grew, so too did the students’ interest in other aspects of the battle. Indeed, two questions concerning German defences, maps and objectives developed into new features to be included in the design of the app.

The Grade 10 Canadian history students began to piece together the last days of their soldier by reading through their service records as well as after-action reports and C.P. Stacey’s official history of Canada in the Second World War. Slowly but surely a more vivid picture emerged of the regiments’ experience on 6 June 1944. Students also began to connect the inner-workings of signalers and engineers with artillery in support of the infantry. The process can at times be slow but experience shows that students soon begin to ask questions about German defence systems and French civilians living under occupation along the coastline. The same process was happening down the hall in Computer Science class. Such questions emerge when students begin to feel more comfortable and familiar with the content surrounding the landings on D-Day.

At this point, however, there is a gaping hole in the biographies that has begun to irritate the students. Service records contain no photographs of soldiers, and while some information may be available online, photos are not common. Attaching a face to a name is important for students because it brings them closer to the soldier they are researching. The attestation paper of each soldier provides physical characteristics, but this is no substitute for an image. The challenge of finding a photograph has proven difficult because we are not investigating soldiers from our community, which means the students have to contact family members from the hometown or city of the soldier. Students have sent emails and left phone messages, making every effort to find a photograph. In many cases a phone message has been returned or an email reply brings the student one step closer to getting an image of the man they are researching. Students have also contacted local museums and Royal Canadian Legion branches from their soldier’s hometown in hopes that a photograph may exist on a wall in a family member’s living room or in an honour room at the local Legion hall. 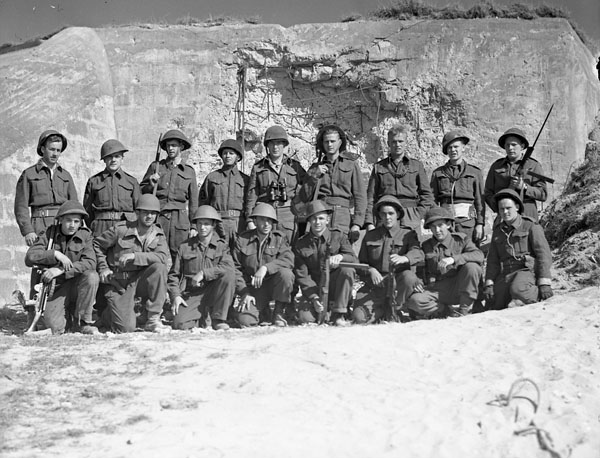 Until mid-December my students would have been able to order historical newspapers from their soldier’s hometown through inter-library loan. This program was offered by Library and Archives Canada but has since been eliminated through federal budget cuts. This has made searching community newspapers extremely challenging.

Despite their best efforts many students are unable to locate a photograph of their soldier. Mason and I decided that a trip to Library and Archives Canada in Ottawa might help to locate photographs of soldiers. We spent hours searching through catalogued images and working with archivists looking through different collections. In the end, no database exists of soldier photographs. We had the same result after a visit to the Canadian War Museum. In some ways it seems incredulous that resources are limited or non-existent surrounding an event that shaped global history in such a way as D-Day.

Photographs present further complications for the computer science students. Incorporating them involves altering the database to accommodate new data fields. This may seem simple enough but it would add new work and therefore new learning for a pair of students already wrestling with the new operating system.

In the end, by contacting local Royal Canadian Legion branches and phoning or emailing family members of the D-Day soldiers many of the students have been successful in attaching a face to a name. It has been a challenging but rewarding adventure and enough photographs have now been obtained to include them as an option in the cell phone app.

Next Blog (Part III): Semester One Ends – How to maintain momentum and pick up where the first semester students left off.