This is the conclusion in a two-part article. See also Part I.

In 1918, the British led North Russian Expeditionary Force realized that they needed local support to defeat the Bolshevik forces in North Russia. Early on the Expeditionary Force attempted to raise a Slavo-British Legion. The idea was that this Legion would be made up of Russian men who were to fight in British uniforms under British command. On paper the Legion would comprise of 2,500 men. The reality was that after the first onrush of destitute locals seeking easy pay and rations, no other Russian seemed intent on joining. Seeing a looming manpower crisis, Ironside welcomed new ideas on raising the strength of the Legion. His staff did not disappoint him. An early September memorandum to Ironside noted the lack of clothing, weapons, ammunition and Russian men willing to fight on behalf of the white cause presented real challenges to recruitment. However, in the various prisons in Murmansk and Archangel resided a preponderance of men who in the eyes of Ironside and his staff – surely would prefer service over the dreary flea infested prisons. 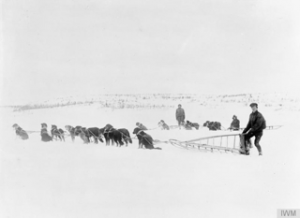 Thus entered the grey eyed, newly minted Lt. Royce Dyer, who Ironside had come to be very fond of. Ironside offered Dyer the command of the first battalion of prisoners and a promotion to Captain – to which Dyer happily accepted. The Captain immediately set about his tasks, with the first one being the recruitment of prisoners. If he managed to accomplish this, he was to train them with British standards of drill and discipline and hopefully insert them into the front lines to replace Allied forces. If Dyer succeeded at his task, the process was to repeat itself until the prisons were empty and the front lines were manned by Russians. Dyer immediately set about his assignment with much vigor. Offering prisoners parole and a chance to serve the British approved Russian Government, Dyer managed to recruit just under three hundred prisoners.

As many of the prisoners had been jailed for being suspected Bolsheviks, Dyer set out to separate the diehard ones from the others. He set up a classification system that put the prisoner recruits into three sections – “bads”, “less-bads” and “probably harmless”. After purging the “bads” Dyer instituted propaganda lectures that attempted to convince the prisoners of the rightness of loyalty to the old regime. He also began to implement military discipline to his new recruits. Thankfully for Dyer, he was given a cadre of 15 Canadian, British, and Australian NCOs and three British officers to help bring about uniformity and discipline with the battalion. 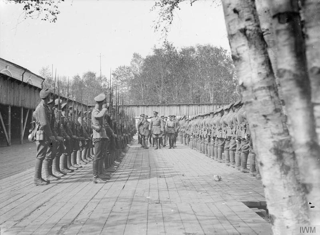 The new battalion seemed to take immediately to Lt. Dyer, calling themselves “Dyer’s Battalion.” Real progress was made within the first three months as the unit drilled relentlessly, practiced disciplined fire, and even promoted a few Russians to be officers. On an inspection of the unit in mid-December, General Ironside was delighted at Dyer’s progress. Gone were the prisoner rags and rampant indiscipline. Now a professional group of soldiers drilled smartly and showed proper discipline in crisp new uniforms. This had been accomplished because of Dyer’s insistence of weeding out those he called the “bads.” In his opinion, they were deceptive and most likely prone to Bolshevik tendencies. With them gone the unit had a chance. Likewise, the men had begun to see Dyer as an icon of bravery and leadership. In the frequent reports about the Battalion, the one constant was the Russian soldiers’ fascination with Captain Dyer. After the inspection tour General Ironside cabled London stating that new Slavo-British Legion units were to be formed based off of Dyer’s Battalion. In many ways the Battalion had come to be seen as a grand success by the British led mission of which further accomplishments could be built. To many, Dyer’s Battalion seemed on track to live up to Ironside’s hope of an indigenous-manned fighting unit when disaster struck. On December 27th, 1918, Dyer was admitted to the 82nd Casualty Clearing Station in Bakharitza suffering from fever. He was quickly diagnosed with broncho-pneumonia and succumb to it three days later, on New Year’s Eve, 1918. 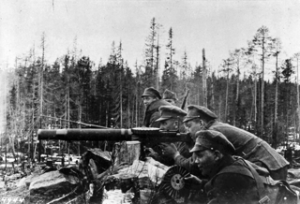 Dyer’s battalion was devastated by this news. Although the other Allied officers and NCOs in the unit were able, none of them had the personality and charisma that connected Dyer to his men. So enthralled were the men of Dyer’s Battalion with their former Commanding Officer that they took to carrying a massive portrait of Dyer, in the Eastern Orthodox tradition of an Icon, whenever they paraded. Dyer’s legacy was ultimately not enough to keep the Battalion together. Lacking Dyer’s lessons about the “bads”, it was decided that a further 100 Bolshevik deserters would augment the unit in order to bring it up to full strength. None of the checks or weeding out processes that Dyer had implemented was followed and soon indiscipline began to break out.

A full six months after Dyer’s death, his battalion was finally ordered up en-masse to take over a section of the front line. Many Allied officers had their doubts, believing that desertion would sap the strength of the battalion once on the front.  What happened was far worse. At 2:30 in the morning of July 7th, or the first night on the front line, a mutiny took place. After the allied officers, who were all British, were murdered in their sleep, a mass defection to the Bolsheviks lines began. By the time nearby Australian units had re-imposed order to the front and captured the remaining mutineers, the damage to the battalion and the expedition as a whole had been done. Of the forty captured mutineers, twelve were sentenced to death in a flying court martial. They were tied to stakes and machine gunned by the remaining Dyer’s Battalion men who had not mutinied, as British soldiers with fixed bayonets looked on. Tellingly, in case they turned on the British, only five rounds were issued to each gun crew. Ironside was particularly affected by the mutiny stating in his diary that “I now felt a distinct urge to extricate myself and my troops as quickly as I could.”

Shortly after the mutiny, the Canadian government decided to bring home the remaining Canadians. They first withdrew the Siberian Expeditionary Force, which included the men who had been sent to Omsk. Then following a phased withdrawal in North Russia, by September, 1919, all Canadians, including the artillery brigade and the Special Service Force that Dyer had arrived with, had been evacuated. Seeing Canadians and other allies abandon the expedition in North Russia, the British withdrew the following month.

Surprisingly, the saga of the mutiny in Dyer’s Battalion did not cease with the disbandment of the North Russian Expedition Force. The British army refused to forget that their officers had been murdered in cold blood. Through the use of interrogations of the remaining mutineers and the employment of spies behind the Bolshevik lines, a list of eight names were identified, representing the ring leaders of the mutiny. An internal British military intelligence memo summed up the mutiny by stating that “the names of these Russians should be carefully recorded and never lost sight of. They are guilty of the blackest treachery conceivable, and if our affairs with Russia should at any time in the next five or ten years reach a condition when it is possible for us to demand their exemplary punishment, we must not fail to do so.” 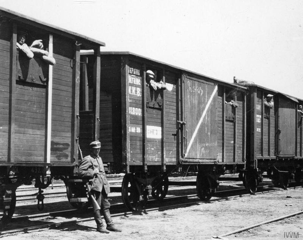 Polish soldier guarding a train, loaded with Soviet prisoners, as it’s waiting to move in one of the Polish or Ukrainian railway stations.
The Imperial War Museum – Q 92247

Then in 1920 it seemed like the British may have their chance to reap revenge. The newly created Soviet Union suffered a massive defeat outside of Warsaw against the Polish army. Over 150,000 Soviets had been captured. The British Director of Military Intelligence discreetly sent out groups of British officers to Polish and German internment camps that housed the recently surrendered Russians in order to find the eight ringleaders. Over the course of six months they searched dozens of internment camps in vain. After many false leads they were forced to conclude that there was a slim chance of ever finding the ringleaders of the Dyer’s Battalion mutiny.

Canada ended up sending some of its most equipped men to North Russia. Royce Dyer was one such man that had attempted the impossible. Dyer’s Battalion was on the road to success yet his death ultimately made sure that the North Russian Expeditionary Force could never raise local units. Whatever success the battalion had under Dyer’s command it was based on the weight of his personality and charisma. His replacements were capable officers but could not fill the vacuum left in the wake of Dyer’s death and when they ignored the late-captain’s system of recruitment, they doomed the battalion. In many ways Dyer has come to symbolize the Canadian efforts in North Russia. He, like other Canadians, set out to achieve much, and they almost did, but the realities of the day prevented any lasting success. The North Russian Expeditionary Force was a failure, but it was not because of Canadians like Royce Dyer.