What does one learn from a visit to the battlefields? This is the question I asked myself whenever a military enthusiast finds out that I am writing my dissertation on the First World War. They always ask, ‘have you been to Belgium?’ and then insist, ‘well you have to visit the battlefields, you’ll learn so much,’ or assure me that, ‘you get such a better understanding of everything once you’ve walked the ground.’ I suspected seeing the battlefields would be like a visit to any military museum, where I can finally set eyes upon an artifact that I’ve always read about but never actually seen. I enjoyed seeing one of Brutinel’s armoured cars when I first visited the Canadian War Museum. This enjoyment was not because seeing the car changed my understanding of the Last Hundred Days, but because I got the same enjoyment as I get when I see how a novel is turned into a movie; finding out if what I had imagined matches the visual rendition. This was my expectation of touring battlefields. Not that I’m against visiting the places that I have spent so much of my youth reading about; it has always been on my ‘to-do’ list. I certainly understand the commemorative side of visiting the sites, cemeteries, and memorials where so many Canadian soldiers died but – having turned away from operational history years ago – I was quite certain that a visit to the battlefields would contribute little to my dissertation on identity on the home front. I’ve just never really been sure what I would gain from a visit to the battlefields other than the chance to see places I’ve only seen in pictures or on maps. As it turned out, walking on ground that I’ve only seen on a map taught me more than I expected. 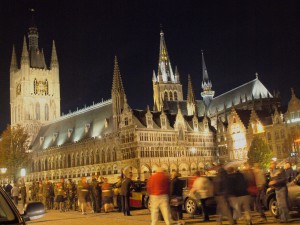 I recently had the opportunity to visit the Ypres Salient. I was attending an event at l’Historial de la Grande Guerre in Péronne, and I scheduled my flights to allow myself an extra day to spend touring around Ypres. Only having one day, I based my plans around the recently-published guidebook by Terry Copp, Matt Symes and Nick Lachance with a bit of extra input from greatwar.co.uk. Combining the two, I made a hasty itinerary by patching together screen-captures from Google Maps on MS Paint. My plan was to make a large counter-clockwise circuit, with the furthest points being around the village of Passchendaele. Due to a mix-up with the hotel, I found myself using a bicycle as my means of transportation. I am not a cyclist but I found that this was a very enjoyable mode of transportation and would recommend it to anyone planning to visit the Ypres Salient. Not having much experience as a cyclist also meant that I did not know how to judge the distances I would be travelling. There was no odometer and I had no idea what distance I could cover in a given time. Leaving the hotel at 8 AM, I estimated that I could cycle only a little faster than my usual walking speed and that I should try to make the 12 kilometers to Passchendaele in three hours, including stops. With my ersatz map loaded onto my smartphone, I set out through the Menin Gate for my first destination east of Ypres. 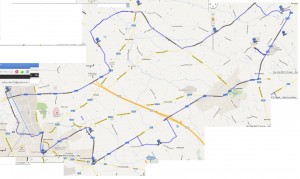 It wasn’t long before I realized that my map was illegible on my phone and that I had no idea what landmarks to look for to determine my position or even to figure out where to make that first turn south. Given my time estimate of three hours to Passchendaele I figured it would be at least a half hour’s ride before I even got close to the turn. In the meantime, I enjoyed the beautiful fall morning in the Belgian countryside. I noted the slight – very slight – uphill and thought back to all those textbooks, documentaries, and exhibits which explained how the German positions in the salient were uphill to those of the BEF and the water drained down into the BEF trenches as a result. I imagined working this observation in some future lecture, telling students that ‘there was a slope, but it was no steeper than any incline on this campus’ (I presumed I would not be giving this lecture at UNB). As I went, I kept my eyes on the horizon expecting to the see Passchendaele Ridge looming in the distance. 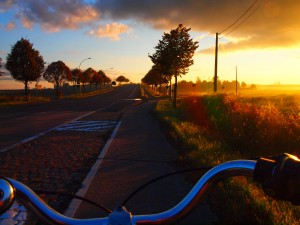 I was surprised to find myself entering the village of Passchendaele. It turns out that a bicycle moves a lot faster than I expected and I had completely missed my turn south. In less than an hour I had cycled the distance between Ypres and Passchendaele. I back-tracked and followed the signs for the Canadian Memorial at Passchendaele. It may have been the jet-lag combining with the cycler’s high but as I walked up to the memorial and looked around, my mind boggled as it tried to match the surroundings with everything I had previously imagined about the Battle of Passchendaele. First, it sunk in that it took the BEF three months to advance a distance which I had covered in well under an hour’s bike ride. I always knew from looking at maps that Ypres and Passchendaele were close, but I never grasped just how close until I traveled that distance myself. Second, I was amazed by the topography. Part of the surprise of suddenly finding myself in Passchendaele was my expectation that there would be a recognizable ridgeline. I thought about a quote I remembered in which Currie impressed his commanders on the importance of taking the ridge: “‘You have been there,’ he said to his battalion commander, ‘and you see how essential it is that the ridge be taken if the result of the summer fighting are not to be wasted.’” I’m not even sure where I first heard that quote, so I did some digging to make sure it exists and I found it in H.M. Urquhart’s Biography of Currie (182). While Urquhart’s biography might not be the most scholarly rigorous text, more recent historians emphasize the importance of the ridge in Haig’s decision to continue the advance. Daniel Dancocks’ Legacy of Valour points out that Haig desired the ridge as a starting-point for a possible offensive in the spring of 1918 (86), as do Robin Prior and Trevor Wilson in Passchendaele: The Untold Story (159). But as I stood on the site of the memorial, the advantage gained from holding this position seemed so subtle, I was baffled. Was this it? The ground tilted gently downward toward Ypres and rose up slightly toward the village, but the pictured I had previously assembled grossly inflated the magnitude of this local patch of high ground. This was not the ridge I had imagined. 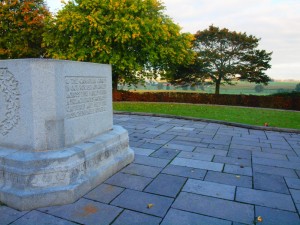 I wasn’t sure what to take away from that experience. Certainly, I have gained a better appreciation of the geographical parameters of the battle with which I can better question the rationale behind the costly advance on Passchendaele. I have indeed learned something from my visit to the battlefield, but could this visit provide any greater revelations? Can my bike-ride on a clear autumn morning somehow be translated to convey the ordeal of a three-month advance in the mud and rain? Certainly not. Walking the battlefields can give a tangible idea of distances, preserved trenches can give a feel of the combat experience, graveyards and memorials can give a measure of the losses suffered, but these are only the manicured remnants of a hugely complex experience. The battlefields of the First World War are just like the tip of the proverbial iceberg. For all that is revealed by walking these sites, so much more remains hidden from view. The lessons I learned from standing at the Passchendaele Memorial reminded me of the sentiment uttered by possibly every doctoral student preparing for their comprehensive exams: ‘the more you know, the more you realize you don’t know.’ Rather than take comfort in the newly-gained certainty that I now understood the elevation of Passchendaele Ridge, I looked back with doubt on my reading of all the material which had contributed my previous, inaccurate, conception of this patch of high ground. The most valuable lesson I learned from my visit to the battlefields was realizing how difficult it can be to assemble an accurate picture of the past from scattered documents, manuscripts, artifacts  and secondary texts. My visit to the battlefield only provided a few answers; it raised many more questions.

Steve Marti is a PhD Candidate at Western University working under the direction of Dr. Jonathan Vance