Abstract: This article is the first in a series that explores the disparate number of documented Canadian Victoria Crosses (VC) awarded during the Great War. Military historians and others use varied criteria to determine a Canadian recipient. Some employ inclusive measures while others are minimalist in their requirements. The 1940s saw the genesis of divergent criteria. The study draws on primary sources as well as Canadian and British secondary literature to demonstrate that inconsistent, erroneous criteria culminated in seventy-two VC holders. The author challenges established publications, presenting the case for two categories of VC recipients: “Canadian” and “dual-allegiance”-the latter for non-Canadian Expeditionary Force recipients.

“Canadian soldiers could boast ten times the sixty-four they now so proudly wear” claims Lieutenant-General (Lt.-Gen.) Sir Arthur Currie, commander of the Canadian Corps, in May 1919 when discussing deeds that were worthy of a Victoria Cross (VC).[1] Since then there has been little consistency in the reported number of Canadians who were awarded the coveted British military decoration in the Great War (1914-1918) according to military history books, secondary literature, archival material and websites. “Table 1” confirms that Canadian VC numbers in non-academic literature have fluctuated over the years, from a minimum of fifty-three to a maximum of seventy-two. The disparate VC counts in secondary literature are habitually referenced to produce additional flawed results in the public domain.[2] According to historian Tim Cook, the definition of a Canadian VC depends on the criteria applied.[3] The premise of this article is that these unreconciled VC counts are primarily a result of inclusive or erroneous criteria, some of which were introduced seventy years ago. 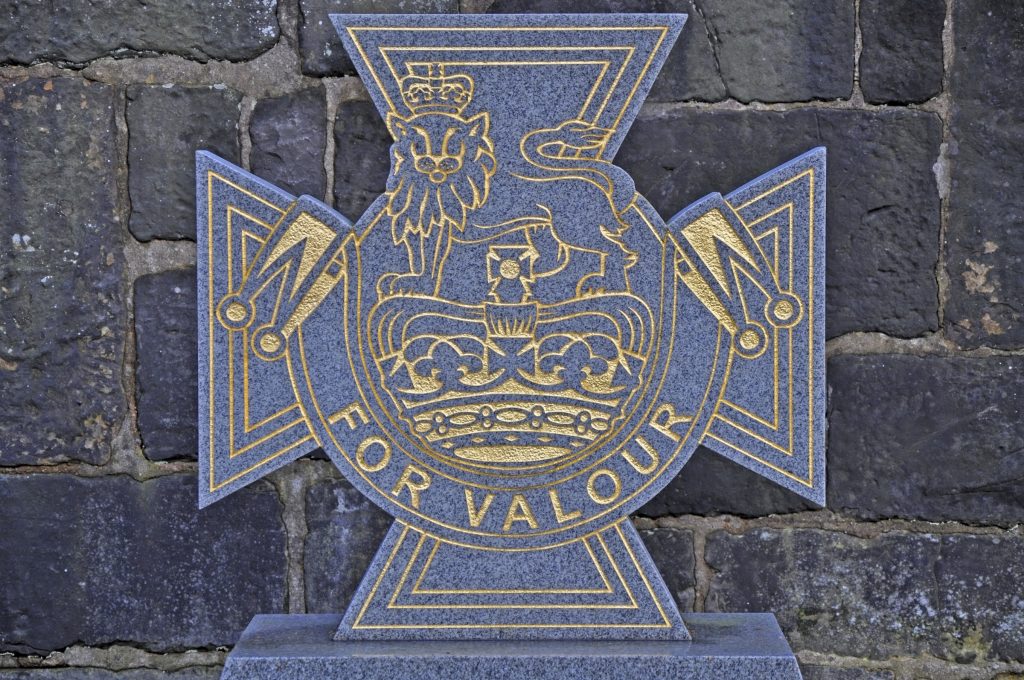 Pertaining to early postwar VC counts, J.A. Hammerton explains that some VC awards “were in the nature of arrears.”[26] Certain acts of valour occurred long before they were officially gazetted. For instance, Piper James Richardson’s heroic act occurred on 8 October 1916, but his deed did not appear in the London Gazette until 22 October 1918. Lt. Edward Bellew earned his VC on 24 April 1915, was taken prisoner and was repatriated to England from Switzerland in December 1918. Bellew’s citation appeared in the London Gazette on 15 May 1919 because the British government kept his award secret, fearing harsh treatment from his captors had the truth been known.[27] Therefore, Edward Bellew and James Richardson are excluded from Thirty Canadian V.Cs.[28] and Richardson is included in Canada at War (published 1919) but Bellew is not. In all, nine Canadian VC recipients were gazetted in 1919, eight in January.[29] This explains why only fifty-three VC holders are reported in some 1919 publications.

The British Empire mobilised 8,654,280 troops in the Great War.[30] Almost 5,400,000 from the United Kingdom (UK), the Dominions and India served on the Western Front[31] including 345,000 in the Canadian Expeditionary Force (CEF).[32] Between 1914 and 1918, 628 VCs were awarded for all operational theatres of war. A brief account of the VC’s history is essential to comprehend why the awarding of the VC is an extraordinarily rare honour.

A British Victoria Cross with a crimson ribbon. Medals issued to the Royal Navy prior to 1918 were suspended from a blue ribbon. With the creation of the Royal Air Force the crimson ribbon became standard.

The Victoria Cross -the Commonwealth’s highest military award for bravery in the presence of the enemy- was instituted on 29 January 1856, with the approval of Queen Victoria, to cover all actions commencing with the Crimean War in 1854. This decoration has been awarded 1358 times to 1355 combatants in the British Commonwealth.[33] In 1993, Canada’s own Victoria Cross was created with the original decoration’s inscription “FOR VALOUR” changed to the Latin phrase “PRO VALORE.”

The conditions for awarding a VC date back to the 1856 VC Royal Warrant, which established fifteen rules and ordinances. The criteria for the VC are defined by Clause Five:

It is ordained that the Cross shall only be awarded to those officers or men who have served Us in the presence of the enemy, and shall have then performed some signal act of valour or devotion to their country.[34]

Two years later, under a third Warrant, an extension was “granted for cases of conspicuous courage and bravery displayed under circumstances of [extreme] danger, but not before the enemy.”[35] However, a Royal Warrant of April 1881 retracted the 1858 order by “declaring unequivocally that the VC should be for ‘conspicuous bravery or devotion to the country in the presence of the enemy’.”[36]

A memorandum from British General Headquarters (GHQ) in September 1915 states that the only decoration to be awarded posthumously is the VC.[37] One hundred and eighty-nine were conferred posthumously during the Great War.[38] GHQ urged that recommendations for other decorations be submitted promptly otherwise highly deserving acts could go unrewarded.[39] If recommended officers or other ranks died before having been decorated, they might be mentioned in despatches. Clause Four of the revised 1920 Royal Warrant made it official that the VC could be awarded posthumously.[40] 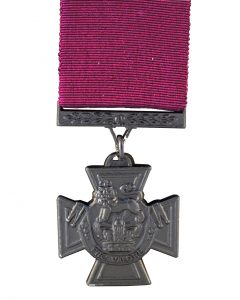 The VC cannot be awarded to civilians unless they are volunteers serving with the armed forces.[41] This was clarified in 1859.[42] It was later recognised that civilians can perform acts of extreme bravery during wartime. In “1940, King George VI instituted the George Cross for civilians and members of the services who performed ‘acts of the greatest heroism or of the most conspicuous courage in circumstances of extreme danger.’”[43]

Clause Thirteen of the Warrant introduced the elective principle whereby a VC could be awarded by ”ballot by the man’s peers in order to recognize the bravery of a larger group of men through one elected representative.”[44] In one case, six VCs were approved by the divisional general of the battalion that landed at Gallipoli on 25 April 1915. The War Office refused to ratify all six. A ballot was held and only three of the six were elected. Two years later, after much lobbying, the remaining three nominees were awarded the VC.[45] There have been no further VCs awarded by ballot for any action of the army since this time.[46]

A GHQ memorandum “CDS 332” regarding recommendations for honours and rewards was released in 1915 and updated over the following three years as “SS 477”. Directives relevant to the VC include submitting the recommendation on the eight-column Army Form W.3121, which was sent up the military hierarchy in duplicate to the Military Secretary to the Commander-in-Chief, accompanied by the original evidence.[47] The 1917 four-page “SS 477.A” edition contains thirty-four clauses.[48] The forty-page September 1918 edition warns that recommendations received after one month from the act of gallantry could be ignored.[49] A 1917 GHQ memorandum for the VC states “only evidence which will be accepted in future is that personally written by each witness of the act, and described in his own words. No general statement signed by several witnesses will be accepted.”[50] The Deputy Assistant Adjutant General of the 1st Canadian Division issued forty-four directives in January 1918. Six copies of the VC recommendation and the original evidence from at least three eye-witnesses described in their own words and in their own handwriting were to be submitted on Army Form W.3121.[51] There were no witnesses to the act that earned Captain Billy Bishop the VC.[52]

On 29 August 1916, a GHQ directive ruled “that in future Victoria Crosses would only be given for acts of conspicuous gallantry which were materially conducive to the gaining of victory. The central repercussion of this ruling was that awards would only be granted in victorious battles.”[53] Two years later, twenty-nine CEF and twenty Australian Imperial Force (AIF) VCs were earned during the last hundred days of the war. The directive further stated that “cases of life saving would not be considered for the award of the Victoria Cross.”[54] Nonetheless soldiers who cared for the wounded would remain eligible for the VC. This exception for the rescue of wounded by care workers was issued by the Canadian Corps in October 1916.[55] A clarification from November 1916 permitted a reward for three rescue scenarios including bringing back a wounded man from a raid.[56] Two CEF stretcher bearers, Privates Michael O’Rourke and John Young were awarded the VC in 1917 and 1918 respectively. Acts of valour are classified into war-winning acts (offensive, defensive, symbolic and secondary) and humanitarian/life-saving acts according to Melvin Smith. In 1915, 68 per cent of VCs were war-winning and 30 per cent were humanitarian. In 1918, 90 per cent were war-winning and 6 per cent were humanitarian.[57] “The High Command of the Western Front … wanted killers first and foremost.”[58] Five life-saving Canadian VCs were awarded. Some life-saving VC recommendations were downgraded as in the case of Private Allan Furber who received the Distinguished Conduct Medal (DCM)[59] and Private William Barrass who received the Russian Cross of St. George.[60]

The Warrant’s Clause Fourteen ordained a special pension of £10 a year for a non-officer VC recipient. Canadian Corps Routine Orders regarding honours and rewards stated that the £10.0.0 annual pension for the VC would not be granted if the soldier was killed before the VC was awarded.[61] An additional sixpence per diem was allotted to those granted a CEF disability pension. This was granted to Canadian VC holders Privates Michael O’Rourke, Thomas Holmes, Cecil Kinross and Corporal Filip Konowal.[62]

Was the awarding purely objective? Did judgment based on personal impressions, feelings and opinions occasionally distort the conferring of the VC? In July 1917 Thomas Dinesen, who had enrolled in the Canadian army in New York City upon his recent arrival from his native Denmark, enlisted with the 42nd Battalion in Montreal.[63] He arrived at the front in March 1918.[64] Private Dinesen was awarded the VC for his actions during ten hours of hand-to-hand fighting near Parvillers, France on 12 August 1918. The 42nd Battalion’s regimental history states “[i]t was, therefore, with pride and satisfaction that the Battalion later received the news that Dinesen had been awarded the Victoria Cross.”[65] It was noted that Dinesen’s father belonged to a distinguished Danish military family. Will Bird, a 42nd Battalion veteran, writes “[t]hen came the report that set all the company swearing. A Dane who came with the MacLean men had been given the Victoria Cross for work at Parvillers! We knew he was a “Blue-blood,” that his letters bore a family crest, that he was wealthy, and in France solely on adventure. … The men of his own platoon seemed most surprised.”[66] They would have been more than surprised if they knew the original recommendation stated “… he was the most outstanding man of his company …”[67] Another 42nd private, Calvin L. Myles was recommended for the VC for carrying a severely wounded officer on his back during a trench raid in February 1917. He had to settle for the DCM and Médaille Militaire.[68] The opposite occurred in the case of a cavalryman. The DSO ribbon presented by Field-Marshal Sir Douglas Haig for Lt. Frederick Harvey’s war-winning act was upgraded to the VC ribbon on 7 June 1917 by Brigadier-General (Brig.-Gen.) John (Jack) Seely.[69]

[8] Various authorities, Canada in the Great War: An Authentic Account of the Military History of Canada from the earliest Days to the Close of the War of the Nations, Vol. VI: Special Services Heroic Deeds Etc (Toronto: United Publications of Canada, 1921), 270-312.

[20] Walter Cooke, Contempt for Danger: Legends of Victoria Cross Recipients and Other Canadian Military Heroes (Toronto: self-published, 2005), 121-23. Private Thomas Ricketts was profiled on page 117, but omitted from the “Great War Victoria Cross Honour Roll.” His name would have resulted in 72 VCs.

[25] Gerald Gliddon (ed.), For Valour: Canadians and the Victoria Cross in the Great War (Toronto: Dundurn, 2015), 453. Actually, five are listed as having strong Canadian connections, but are counted as CEF VCs erroneously.

[53] Victoria D’Alton, “Behind the Valour: A technical, administrative and bureaucratic analysis of the Victoria Cross and the AIF on the Western Front, 1916-1918,” MA Thesis: University of New South Wales, 2010, 66.