Garth Webb,  founder behind the Juno Beach Centre, has died. He was 93. Mr. Webb landed on Juno Beach on D-Day, June 6, 1944, as part of the Canadian 14th Field Artillery.

The Juno Beach Centre issued an official press release on 8 May. Read the full release here. 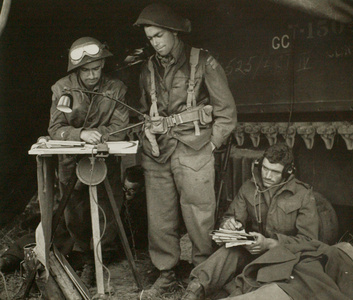 “Garth S. Webb, M.S.C. Passed away peacefully at the Joseph Brant Memorial Hospital, Burlington on Tuesday, May 8, 2012 at the age of 93. Garth Webb, beloved companion and best friend of Lise Cooper. Predeceased by his first wife Camilla (nee Cunningham). Dear father of Susan, Andrew (Ruth Hall), Peter (Patricia Allan) and stepfather of Don Cooper and Susan Mousseau. Cherished grandfather and great- grandfather of 12 grandchildren and 6 great-grandchildren. Garth will be sadly missed by his sister Patricia Atkinson and his special nephew Mike Sexsmith, as well as his many friends. Garth grew up in Calgary and attended Queen’s University until he enlisted with the 14th Field Regiment of the Royal Canadian Artillery. He fought on “D-Day” through North West Europe into Germany. Garth returned to Queen’s following the war and graduated with a Bachelor’s Degree in Commerce. Garth went on to become a Real Estate Appraiser and formed Garth S. Webb & Associates. A lifelong fan of the Toronto Blue Jays, Maple Leafs and Argonauts. Garth was the President and founder of the Juno Beach Centre Association, which saw the creation of the Juno Beach Centre in Normandy, France, for which he was awarded the Meritorious Service Cross, the Minister of Veterans Affairs Commendation and made a member of the French Legion of Honour. September 2012 will see the opening of Garth Webb Secondary School in Oakville. Visitation at SMITH’S FUNERAL HOME, 1167 Guelph Line (one stoplight north of QEW), BURLINGTON, (905-632-3333), on Thursday from 7-9 p.m and Friday from 3-5 and 7-9 p.m., with Legion Service Friday at 7 p.m. A Funeral Service will be held at Wellington Square United Church, 2121 Caroline Street, Burlington, on Saturday, May 12, 2012, at 1:30 p.m. Cremation to follow. As an expression of sympathy, donations made to the Juno Beach Centre Association (www.junobeach.org) would be appreciated.”

Share your memories and condolences by signing the online guestbook at Legacy.com here.