Ghosts of the First World War: Spiritualism and Psychical Research in Britain

“Ghosts of the First World War:

Spiritualism and Psychical Research in Britain”

The Halloween season brings with it stories of ghost sightings, haunted houses, demonic possession, noisy poltergeists and the like. Given wars association with death, they have unsurprisingly produced a significant amount of paranormal phenomena and literature. The battlefields of the American Civil War are today host to an active ghostly tourism (for an examination of the Civil War and Spiritualism, see the fascinating documentary embedded at the end of this post). Phantom tales provide a rich source of entertainment, but historically, ghosts have also been very serious business, especially for those experiencing the death and destruction wrought by war. A study of postwar Vietnam has shown that urbanization over landscapes associated with the war has led to an increase in ghost stories and concerns about disturbing the dead. Vietnamese officials attempting to locate and repatriate American dead have utilized psychics. Supernatural beliefs have therefore had very real and practical influences on the post-Cold War reconstruction process. With the First World War now in its centenary, two examples of how ghosts and the paranormal were part of the war experience are presented below. Popular and intellectual movements such as Spiritualism and Psychical Research offered new ways of interpreting the process and consequences of death. Under the losses and anxiety of the Great War, these movements produced various instances of paranormal phenomena.

Spiritualism can be defined as the belief in the survival of human personality and the possibility of communication through the séance. Originally founded in 1848, its popularity had somewhat waned by the twentieth-century. The movement saw resurgence during the Great War as grieving family members sought proof that their loved ones survived death and could communicate with the living. One of the most famous Spiritualists of the era was the British physicist Sir Oliver Lodge. Lodge had been sympathetic to the Spiritualist movement before 1914, but his 1916 book Raymond: Or Life And Death propelled his status as a Spiritualist to wider attention, fame, and controversy. 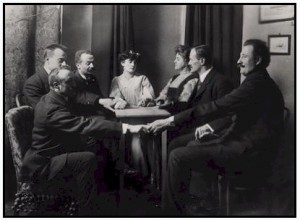 Raymond Lodge, the youngest son of Sir Oliver and Mary Lodge, was fatally wounded on 14 September 1915 near Ypres. In letters to his parents before his death, Raymond assured them that he was doing very well and was enjoying his work at the Front, using his skills as an engineer to help construct trenches (the sincerity of this cheerfulness is questionable). When he was not digging trenches, he liked to spend his free time constructing acrostic puzzles for his father to decipher. Shortly after Raymond’s death, puzzled messages of another kind began emerging in séances from various sources signaling to the Lodges that their son’s spirit had survived death and was eager to communicate. (Spiritualists engaged in a cross-correspondence with each other in order to build evidential cases. Important messages from séances were recorded and sent through mail to relevant researchers. If two or more mediums who did not know one another could give similar communications, then it was considered strong evidence that there was an actual spirit independent of the medium). Lodge received his first messages from “Raymond” in this manner, and his wife subsequently sat down for an anonymous sitting with the medium Gladys Osborne Leonard on 24 September 1915. Impressed by the quality of evidence brought forth by Leonard, the Lodges conducted further séances that offered for them, strong proof of the survival of Raymond, including knowledge of a photograph taken at the front whose existence was unbeknownst to them but later confirmed to exist. 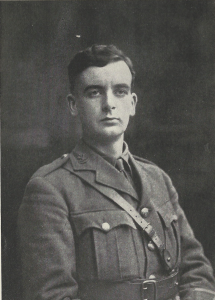 Jay Winter and other scholars have argued that Spiritualism was appealing to Britons during the Great War because it offered bereaving family members the pragmatic comfort and communication that traditional religions and prayer could not provide. Like Raymond’s letters from the Front, the mediumistic communications delivered uplifting assurances. His “spirit” explained to his parents that he did not suffer in death and that he was happy and enjoying himself in the spirit world, even smoking cigars (a passage that brought ridicule from critics of the book). In a sitting with Mrs. Leonard on 26 November 1915, Raymond was said to have communicated “Mother darling, I am so happy, and so much more so because you are” (p. 188). Mary Lodge expressed relief and noted that they could now enjoy the upcoming Christmas season. Raymond reassured her that he would be present but that, “If I come there, there must be no sadness. I don’t want to be a ghost at the feast” (p. 189). Other messages were related to the war, and gave his death sacrificial meaning. “Raymond” explained that he was helping dead soldiers transition to the other world and that the dead were waiting to be contacted by those on earth. Through further spiritual communications, the truth of the afterlife could be spread and unite families torn apart by war. As he was said to have communicated to Sir Oliver:

with me through you, [we] can break away the dam … For God’s sake father do it. Because if only you knew, and could only see what I see: … the boys on our side shut out, you would throw the whole strength of yourself into this work. … from [my] death, which is only one of thousands … … By passing away, many hundreds will benefit (p. 182).

For those confronting the horrors of modern war, it was a consoling message to know that there was an existence beyond the physical world, and the soldiers’ deaths were meaningful.

As an intellectual, Lodge was responding to the growing popularity of materialism and seeking reconciliation between science and religion. The nineteenth-century was a time of significant scientific and technological advancements, including the discovery of previously invisible forces that could be used to communicate across vast distances. New technologies such as the telegraph and later the radio and telephone ignited the possibility that phenomena previously associated with the supernatural might have a physical reality. The Society for Psychical Research (SPR) was founded in 1882 with the intention to advance a serious scientific study of the supernatural. Their most famous theory was telepathy, which argued that in certain abnormal states of consciousness such as the moment of death, the mind was capable of transmitting thoughts to other minds. Once received (usually in an altered state of consciousness such as sleep), these thoughts would be translated by the receiving brain into concrete images. Some members of the SPR argued that ghost-sightings were merely telepathic phenomena.

One wartime case highlights the types of anxieties experienced by those on the homefront as loved-ones fought in uncertain conditions and in distant battlefields. Twenty-four hours after Lieut. Alec Leith Johnston was killed on 22 April, 1916, his father Dr. George Johnston had the following dream:

I saw two soldiers in khaki standing beside a pike of clothing and accouterments which … I knew to be Alec’s, … Then one of them took up a khaki shirt which was wrapped round something so as to form a kind of roll. … it unrolled itself and a pair of heavy, extremely muddy boots fell out and banged heavily on the floor… And then the words ‘Alec is dead and they are going through his kit,’ were most clearly borne in upon my mind. … I suppose I still tried to persuade myself that it might not be true, but it was useless and when the official telegram arrived it only confirmed what I already knew.[1]

Dr. Johnston and the SPR interpreted this as a symbolic telepathic message from Alec to notify his father of his death. Alec was believed to be out of the trenches and in safe conditions, resting with his battalion. But the dream had all the imagery of a battle. Why were his clothes covered in mud, and why would anyone be going through his things? Dr. Johnston later learned that the battalion was called-up unexpectedly to recapture a German position under muddy conditions. This was a sad reality of the First World War. Not only could men be called over-the-top to their death at any moment, but they could fall victim to arbitrary and instantaneous death despite heroism and courage. Dr. Johnston was told that Alec was shot by a sniper after consolidating the captured trench. Belief in the paranormal in this case provided assurance of his son’s fate instead of uncertainty, and comfort in “knowing” that his son was able to say goodbye.

The First World War occurred during a time in European history when new technologies and scientific discoveries had raised the possibility for proving the existence of traditional supernatural beliefs. These concepts led to personal experiences of the kind mentioned above. Regardless of whether or not spirits and telepathy exist, their popularity influenced how grieving family members faced the traumatic losses of the Great War.