This is the second post in a miniseries that explores the personal military history of Jeffrey Storey, decedent of the conflict-laden regions of Auronzo di Cadore on the Austrian border in the Italian Alps. Please click here to read part 1.

The Vecellio family of Cadore are not only descended from the Lombard German Collalto and da Camino Families but they are also descended from the German Frank King and Emperor of Western Europe, Charlemagne. It is most likely that Charlemagne was descended from the Merovingian Dynasty of France through his mother Bertha ‘Bertrada’ of Laon. The Merovingian Dynasty of France was named after the Salian Frank chieftain Merovech, though his actual existence remains unclear. This means that Charlemagne and the Vecellio Family of Cadore are descended from “Merovech.” In 451, Attila the Hun invaded the Roman province of Gaul with the intent to add the Roman province to the territories of his empire. During the same year Aetius Flavius assembled an army made up of Roman Legionnaires, Visigoths, Burgundians, Franks, and Alans to fight against Attila the Hun at the Battle of the Catalaunian Fields in the Champagne district of France. The Roman general Aetius Flavius deployed his troops in the following manner: He put the Alans, under their king Sangiban, in the centre and then placed the Visigoths and the Burgundians on the right flank of his army, and finally he placed the Roman Legionnaires and the Salian Franks on the left flank. Aetius Flavius planned to surround Attila the Hun and his army in the same way that the Carthaginian general Hannibal Barca surrounded the Roman Army in the Battle of Cannae that was fought on 2 August 216 BCE. It is well known that the Huns under the command of Attila the Hun were militarily checked at this famous battle. We know from Gregory of Tours’ The History Of The Franks that Salian Franks were present at the Battle of the Catalaunian Fields in the Roman Army of Aetius Flavius. It is in this famous book that the name Merovech is mentioned.

The Battle of the Catalaunian Fields was so significant that many have argued it saved Western Civilization from certain destruction at the hands of the Huns under Attila the Hun. It is exciting to know that the Battle of the Catalaunian Fields is in my ancestral lineage through being descended from King Clovis I and his wife Queen Clotilda. Merovech was the grandfather of King Clovis I on his paternal side and King Gundioc was the grandfather of Queen Clotilda on her paternal side. The paternal grandfathers of both King Clovis I and Queen Clotilda fought at the Battle of the Catalaunian Fields against Attila the Hun in 451. Queen Clotilda’s maternal lineage is also very interesting, because her mother was the sister of Ricimer, the Suebian-Gothic German general who was the emperor maker of the Western Roman Empire from 456 until his death in 472. Ricimer and his sister were descended from the Suebian German King of Galicia in north western Spain named Rechila and the daughter of the Visigoth King Wallia. The father of King Rechila, Hermeric, led the German Suebi tribe across the Rhine River on 31 December 406 along with the Vandals and the Alans, after these tribes brutally sacked the now German city of Trier. Hermeric established a kingdom in the north western Spanish region of Galicia. The Visigoth King Wallia reigned only from 415 till his death in 419, and yet he was one of the most important of the early Visigothic kings because he initiated the Visigothic conquest of Spain in 416, in conjunction with the Roman government in order to expel the Vandals and Alans and the Suebi from Spain.

The Visigothic Kingdom of Spain lasted until 711, when it was conquered by the Muslim Moors under the leadership of Tariq ibn Ziyad and Musa ibn Nusair, the Arab governor of Morocco and Algeria. King Clovis I of the Merovingian Dynasty founded the nation of France after the Battle of Tolbiac, which most likely took place in 496. It was during the Battle of Tolbiac that Clovis I made the “decision” to become a Christian. The Vecellio Family of Cadore’s connection to the Emperor Charlemagne and the Merovingian Dynasty of France, the Suebian German kings Hermeric and Rechila of Galicia in Spain, the Burgundian royal family in south eastern France, and finally the Visigoth King Wallia in southern France is both exciting and unexpected. As I have already mentioned, the Vecellio Family of Cadore is descended from the Lombard German da Camino Family. The da Camino Family was in turn descended from the Lombard German Collalto Family. The da Camino Family and the Vecellio Family of Cadore are both descended from the Collalto Family. The Collalto, da Camino, and Vecellio families were descended, after 958, from the Emperor Charlemagne and most likely from the Merovingian Dynasty of France. 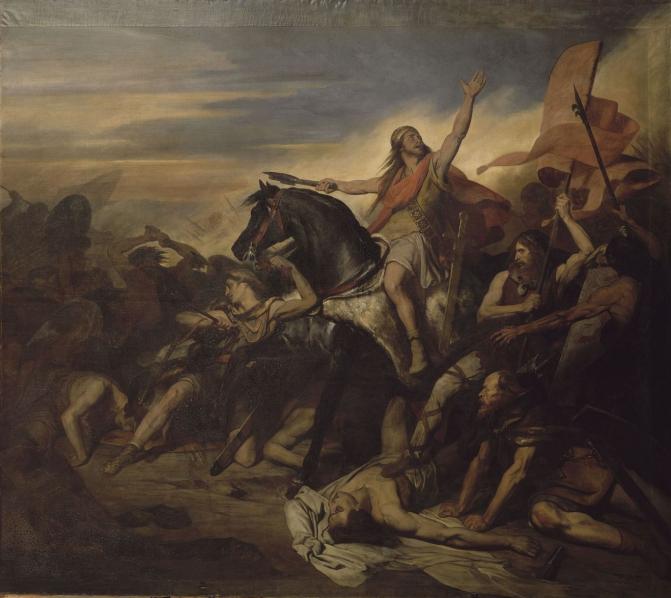