This is the third post in a miniseries that explores the personal military history of Jeffrey Storey, decedent of the conflict-laden regions of Auronzo di Cadore on the Austrian border in the Italian Alps. Please click here to read parts 1, 2, and 3. 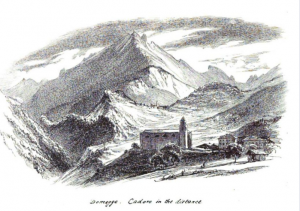 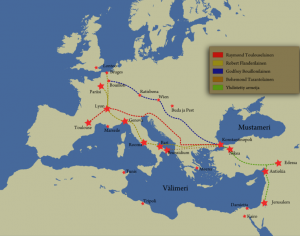 The Guthrie Clan of Scotland is on my paternal side. The first recorded Guthrie in the history of the Guthrie Clan of Scotland was Squire Guthrie. He lived during the Scottish Wars of Independence and is possibly one of my direct ancestors through my paternal side. He was a loyal supporter of the famous Scottish patriot William Wallace. In 1297 A.D. Wallace was given the title of Lord Protector of Scotland. After the disastrous Battle of Falkirk in 1298 A.D. he renounced his position as Lord Protector of Scotland and went to France. In the year 1299 A.D. Squire Guthrie was sent to France with the purpose of finding Wallace and escorting him back to Scotland in order to fight against the new advances of King Edward I of England. He succeeded at this in 1303 A.D. To years alater, Wallace was betrayed, ‘tried’ and found guilty of treason against King Edward I of England. He was executed and parts of his body were placed on the four corners of the British Isles.[1]

Another chapter in the military history of my family occurs on October 7, 1571 A.D. when my distant cousin Silvio Porcia, fought in the Venetian fleet at the famous naval Battle of Lepanto. (I am related to the Porcia Family of Friuli Venezia Giulia because Gabriel I da Camino married Adeleta di Porcia. Gabriel I da Camino was the son of Guecello I da Camino and thus part of the ancestral lineage of the Vecellio Family of Cadore). The Venetian galleys made up the left flank of the Catholic fleet at the Battle of Lepanto. The Catholic fleet faced off against the Muslims under the guise of the Osmanli (Ottoman) Turks and their fleet of galleys. Silvio Porcia fought bravely and gallantly against the naval forces of the Osmanli (Ottoman) Turks. The naval Battle of Lepanto was a victory for the Catholic Fleet.

As I mentioned above, I am descended from the Guthrie Clan of Scotland. On September 11, 1683, over a century since Lepanto, the Ottoman Turks laid siege to Vienna. Among the European nations that came to help the Austrians resist the siege was Poland. The King of Poland, Jon III Sobieski, was a great general, a loyal Catholic and an enemy of the Muslim Ottoman Turks. One member of King Jon III Sobieski’s army was Colonel George Guthrie, descended from the Guthrie Clan of Scotland. Guthrie personally raised a contingent of 1,000 Polish Hussars out of his own pocket to join the Polish relieving force. The Ottoman siege of Vienna was lifted and George Guthrie and his descendants were made members of the Polish nobility. The Polish Guthrie Family resided in Poland until the Nazis invasion on September 1, 1939.

Napoleon’s military skills really became noticed at the Siege of Toulon in 1793. In 1796, he led the French Army in northern Italy to victory and added these regions to the domain of France. In 1797, on his way to Egypt, Napoleon overthrew the Knights of St. John in Malta. In 1798, he entered Egypt at the port city of Alexandria. While in Egypt he fought the Battle of the Pyramids against the resurgent Muslim Turkish Mamluks (Mamelukes) and defeated them thanks to modern 18th Century European weapons. In 1799, Napoleon marched into what is now Israel and laid siege to the ancient city of Acre (Akko). He was unable to take the city however, because of determined resistance by Muslim Ottoman Turkish soldiers. After his failure to capture Acre (Akko), Napoleon left his army in Egypt and sailed back to France in order to seize power. 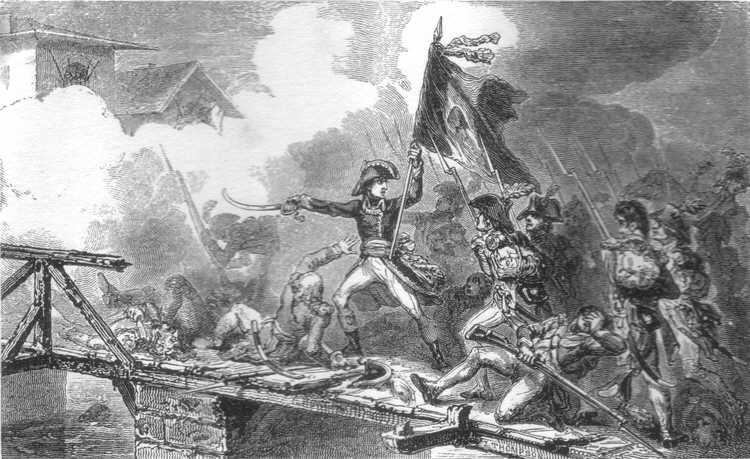 Napoleon at the bridge of Arcola on 15 November 1796, on the first day of the three day battle. Picture taken from The Family Library No.1, Napoleon Buonaparte, published 1835, Rickard, J (9 August 2008).

Napoleon Bonaparte successfully overthrew the government of France (the Directory) in 1799. He became First Consul of France in 1800 and instituted the Code Napoleon, a secular code of laws that is still the basis for some French Law. Napoleon crowned himself Emperor of France on December 2, 1804 in a very elaborate ceremony. In December of 1805 Napoleon I Bonaparte fought the Battle of Austerlitz (Slavkov) in what is now the Czech Republic. Representing his greatest victory, Napoleon’s army lost only 8,000-9,000 soldiers against the 26,000-27,000 soldiers lost by the Austro-Russian armies.

In 1806 Napoleon marched against the German Kingdom of Prussia. After victories in Jena and Auerstadt the Prussians became a vassal. In 1807 he fought the battles of Eylau and Friedland against the Russians. He defeated the Russian Army of Czar Alexander I at these battles but also suffered heavy losses. In 1808 he invaded Spain and although he quickly defeated the Spanish Army the French could not break the will of the Spanish Guerrilla’s. His next target in 1809 was the Hapsburg Empire of Austria. He was victorious at the Battle of Wagram but again suffered heavy losses.

In 1812 Napoleon foolishly invaded Russia. The Russian Army under Mikhail Kutuzov used the military tactic of ‘static defense’. This tactic was meant to force Napoleon deeper into Russia, extend his supply lines while the Russians committed “scorched-earth” to deprive the invaders of further resources. Kutuzov eventually forced Napoleon to fight a costly battle at Borodino (this battle was at best a stalemate). Napoleon and his Grande Armee entered Moscow only to abandon it because the Russians had burned the city. Napoleon retreated through the cold Russian winter of 1812. Once again, as in 1799, he had abandoned his soldiers. When Napoleon and the remains of his Grande Armee reached Warsaw only 100,000 soldiers were left out of an initial invasion force of 600,000.

After this defeat, Europe rose in a united effort to dethrone Napoleon. In 1813 Napoleon fought and lost the famous Battle of Leipzig. This battle cost him control over Germany. The year 1814 brought worse portents for Napoleon and France. In 1814 the allied armies of Great Britain, Austria, Prussia, and Russia invaded France itself. Napoleon lost the military campaign to defend France against the allied armies. They forced him to abdicate and he was exiled to the Italian island of Elba. However, he escaped in the early months of 1815 and entered France. Once again the French Army followed him to his decisive defeat at the Battle of Waterloo on June 18, 1815. Afterwards he was finally exiled to the island of St. Helena where he died in 1821.

The next chapter in the military history of my ancestral lineage will examine the late nineteenth and early twentieth century, including the American Civil War, the First and Seocnd World Wars and the Vietnam War.