Laura Fraser is an Teaching Associate of LCMSDS. She holds a BA in History from Queen’s University and her BEd from the University of Ottawa, and is an accredited educator with the Ontario College of Teachers. In addition to teaching, Laura has worked with Heritage Toronto and the Historica-Dominion Institute. You can follow Laura through her blog http://blackboardbattlefield.com and on Twitter: @lsfraser. The following is her recent blog entry which reflects on the service of her Great-Great Uncle who fought at Vimy Ridge.

Vimy Ridge has always held a special place for me as a Canadian historian and educator. Beyond its status as a nation-maker though, Vimy has a personal pull as well. 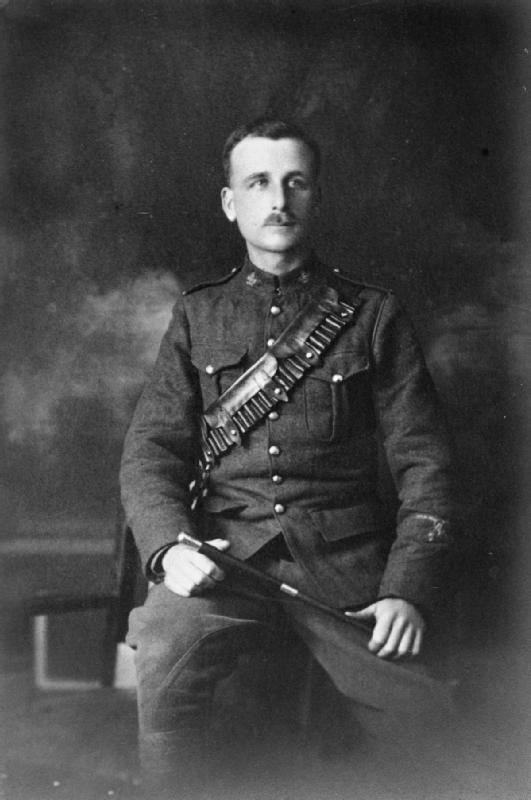 My Grandma Fraser’s uncle (making him my Great-Great Uncle) fought with the 7th Battalion, Canadian Infantry at Vimy Ridge. He survived the initial attack, only to be fatally wounded 3 days after. In many ways I attribute my love of history to Claude and his sacrifice. In honour of him and the 7000 wounded and 3578 dead, my post on this 95th Anniversary of Vimy Ridge is about Claude: a real person and story in the greater Canadian myth of Vimy Ridge.

Claude was born October 26, 1891 in Manchester, England to Owen William Cox and Ella Wills Wookey. His father worked as Receiver at the Manchester Grammar School. He had an older brother (my Great-Grandfather), Reginald Owen Cox and two sisters: one older, Kathleen, and one younger, Dorothy. His sister Kathleen tragically died when she was 8 years old (and Claude 7) when, playing with matches with a neighbourhood boy, she set her petticoats on fire.

Family lore suggests that Claude felt constrained in his life in England, and sometime in the early 1900s emigrated to Canada. His brother Reginald arrived in Canada in 1907; a passenger list has Claude arriving (perhaps for the first time, although it is not certain) in 1910 with his destination as Red Deer, Alberta. Census data has him living in St. Catharines, Ontario in 1912 as a Farm Labourer.

We know he left Canada in 1912 with his destination set as “Los Angeles, California.” His intention was a horseback trip down the North American West Coast. (With a trip like this, it’s not hard to see his personality, and how he may have felt constrained in England.) He was still on this trip when war broke out in 1914.

We know that Claude was rejected entry to Canada at White Rock, British Columbia on the 8 February 1915. After this, things get a little fuzzy. The Imperial War Museum biography of Claude has him enlisting with “the 72 Battalion Seaforth Highlanders of Canada on 22 February 1915, subsequently transferring to 11 Battalion Canadian Mounted Rifles.” His Attestation Papers, however, have him enlisting on 19 March, 1915, with the signing officer being from the Canadian Mounted Rifles and the regimental number associated with 7th Battalion.

The papers list him as 5ft 9 1/4 inches, with chest measurements of 36 1/2 inches and his range of expansion 1 1/2 inches. His complexion is listed as Fair, with blue eyes and brown hair. He has a vaccination mark on his left arm, and a scar on his left shin.

In 1916, Claude relinquished his rank of Corporal and joined the Lewis Gun Section – the Imperial War Museum biography indicates this was in order to see action on the Western Front. His rank in the Lewis Gun is confirmed by his letters home.

“That seems to be a fine advance we have made down on the Somme. I have not seen any of the details in the paper but —from all I have heard it seems good. Apparently Fritz withdrew under pressure. He will have to do considerably more withdrawing before we get through with him. His strength is tried out every night along the line somewhere by continual raiding and he does not like it. I wish I could bust-out and tell you the story of a raid  but the censor would not pass it so you will have to read the story in the newspapers. Being in the Lewis section I have no place in the small night raids. They are handled by the bombers and bayonet men whilst we stand to and take whatever Fritz sees fit to throw over in the nature of shells. Here I had better cease before I say too much.”

We know also of his plans for the end of the war, in a letter to his father (referring to a letter from his sister, Dorothy – here, Dorry):

“I still cannot think of any particular want that Dorry can supply. She says I am lucky if I want nothing. I want a lot of things – particularly the end of the war, a suit of civvies, a clean shirt, a square meal, a quiet fireside, a home, a retreat from the crowds and a beaten Hun. I have nothing more to write about so here’s the best of love  to all.”

Claude participated in the Battle of Vimy Ridge, and wrote a brief letter sometime after the attack to his father, sending along a few relics from the battlefield – relics that did not make it with the letters through history.

“Relics from the battlefields of Souchez Carency and Vimy  Ridge. Where the French lost 100,000 men in the earlier days of the war. We are now holding Vimy Ridge, near Lens and not very far from Arras. My battalion is here. Am sending this in haste by one of our Corporals  who is going on leave. The bayonet is French a relic of the fierce  hand-to-hand fighting which took place here 12 months ago. You will be  able to clean it up with emery paper. The handle I believe is of nickel. The shell fragments are modern, that is they fell within the last two days, one of ‘em un-pleasantly close. Very quiet here, however I am  quite well and uninjured. Mr. Lees and your parcel came all right. You do  not seem to have got my letter telling you so. No letter from you lately, but two from Dorry. Cold, dry, frosty weather. Written in the front lines.”

This was Claude’s final letter from the front. On the 13 April 1917 he was wounded by a shell blast and removed to No. 7 Canadian General Hospital. According to letters from W. A. Ferguson, the Chaplain at the hospital, by the 18 or 19 of April, the gangrene in his right leg had grown so bad that amputation was necessary. (The Imperial War Museum lists both legs as being amputated.) Ferguson wrote:

“Unfortunately his strength seemed unequal to the shock and he died peacefully yesterday afternoon, a day and a half (I think) after his operation. I saw him a couple of times the day before he died and was with him at night for awhile. The nurse also sent me a message at 6 a.m. yesterday, at his request, and I went over and sat with him holding his hand for awhile and talking to him. He was very weak but quite clear, brave, and peaceful and talked about his home, about you, about his little sister to whom he wished his love sent; and also about a young lady in Victoria B.C. who he said had “kept him straight” by her affection. He asked me to write to you, and tell you anything I could. He was strangely alive at this time and was even smoking his pipe and apparently enjoying it–though of course I knew, and I think he did, that there was little chance of his pulling through. The only thing noticeable except pallor and weakness was that he said his head was full of fancies, and occasionally for a minute or two he drifted off to describe the old friends he had (he said) just met outside–and then he would realize that he was wandering and become perfectly clear again. We talked about his prayers too, and he seemed to be trusting God. I was very greatly attracted to him and so was his nurse, and I feel I should like to express my deepest sympathy for the loss of so gallant and fine a son. I saw him again about 9:30 a.m. and he was weaker but very cheerful. The next time (3 p.m.) he was unconscious, and just slept away in the afternoon.”

“You understand probably that the so-called “gas gangrene” is a very rapid and deadly, though painless infection of a wound, which arises quite suddenly, it is believed from contact with the  soil of the trenches. It was this which caused his death. There is at  present no antidote known. Amputation is the only hope, and so rapid is the infection 6 or 8 hours sometimes between its first appearance and the fatal result that even amputation naturally often fails. I know that your dear son was tenderly nursed and cared for up to the last, and that his mind was evidently at peace. I don’t know that there is anything finer or happier that one can say about death than that.” 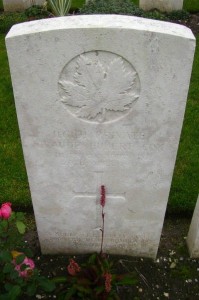 When we, as Canadians, think about Vimy Ridge, we think of a great Canadian victory. Sir Arthur Currie, the creeping barrage, and extensive rehearsals. We think of all the Canadian divisions fighting as one united Corps: a nation-making moment. Rarely do we think of the British artillery and 51st Highland Division who also participated. Although with our collective memory of the First World War, loss, death and mourning are ever-present, with Vimy it is often a celebration of nationhood. Rarely, with Vimy, do we think of the 7000 wounded and 3578 dead, including my Great-Great Uncle Claude.

Today, on Vimy’s 95th Anniversary, take the time to remember and honour the over 10,000 casualties from one of our most mythologized Canadian moments.