A Photo Exhibition on Montréal During the Great War

To mark the 100th anniversary of the end of the First World War, the Château Ramezay – Historic Site and Museum of Montréal invited Terry Copp and Alexander Maavara to create an outdoor exhibition on Montréal during the years 1914 to 1918. Archival photographs illustrate how the population of Montréal experienced this period. The exhibition will be held on Le Royer and Saint-Claude streets, behind the Château Ramezay Garden, from July 20 to November 18, 2018. 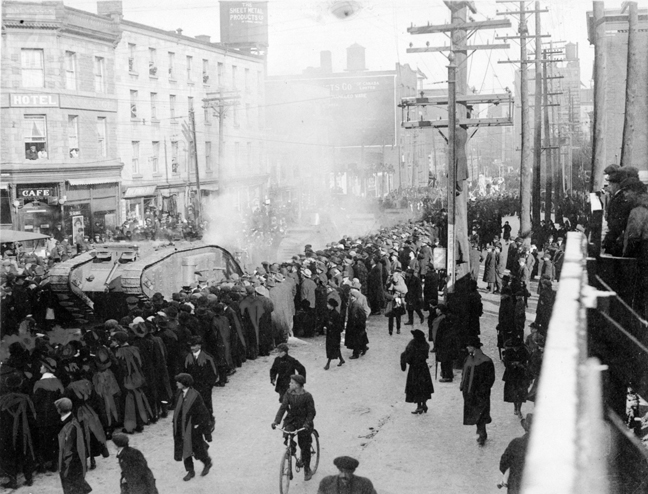 HOW MONTRÉAL EXPERIENCED THE WAR
Drawing from Terry Copp and Alexander Maavara’s digital book Montreal At War 1914-1918, the exhibition features a series of carefully chosen archival photographs to tell the story of how Montrealers of all classes experienced the war that was supposed to “end all wars.” From Champ-de-Mars to the Lachine Canal, the public will discover some of the evocative moments in Montréal’s wartime history: an anti-conscription march, women manufacturing shells in a munitions plant in the Rosemont district, and more.

THROUGH THE LENS OF AN EXPERT

Terry Copp is Professor Emeritus as well as Founder and Director of the Laurier Centre for Military Strategic and Disarmament Studies (LCMSDS), a research centre at Wilfrid Laurier University. One of Canada’s leading military historians for the last 50 years, he is the author and co-author of over 20 books and numerous scholarly articles on the Canadian Army’s operations and experience during both world wars. Alexander Maavara is Terry Copp’s main research assistant at the LCMSDS. He is currently completing a Master of History at Wilfrid Laurier University.

The outdoor photo exhibition Montréal 14-18 will be presented free of charge from July 20 to November 18, 2018, on Le Royer and Saint-Claude streets, behind the Château Ramezay Garden, perpendicular to Marché Bonsecours. Take advantage of your visit to admire artist Dominique Blain’s outdoor work, Fields of Memory. As part of the 10th edition of Métis-sur-Montréal, this work is presented just metres away, at Place De La Dauversière, by the Château Ramezay and Reford Gardens. To wrap up the series of activities commemorating the 100th anniversary of the Armistice of the First World War, the Château Ramezay will present the travelling exhibition WAR Flowers from October 24, 2018 to March 31, 2019.

The Château Ramezay – Historic Site and Museum of Montréal, a non-profit organization, safeguards and makes accessible a collection that reflects and attests to the history of Montréal and Quebec. It was the first building in Quebec to be classified an historic monument and is the province’s oldest private historical museum. Visit our website: chateauramezay.qc.ca